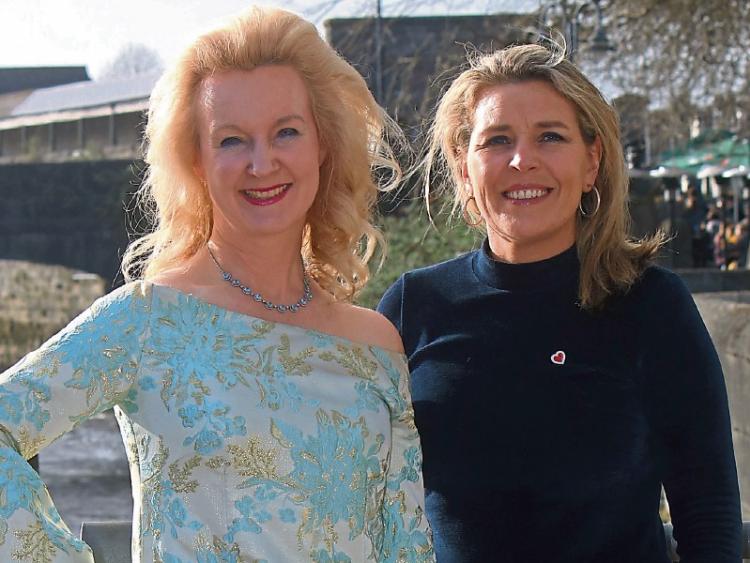 Dr Mary Ryan from Nenagh, left, who will launch her new CD, The Next Chapter, in the Abbey Court Hotel on April 12, with Anne Riordan of the Irish Heart Foundation

Well-known Tipperary singer Dr Mary Ryan is about to open a new chapter in her musical career with the launch of her latest CD in April.

The CD is appropriately called The Next Chapter and will be launched in a gala concert at 8pm in the Abbey Court Hotel, Nenagh, on Wednesday, April 12.

Explaining the title, Dr Mary said that after qualifying from TCD she got a job back in Barrington's Hospital in Limerick, and moved into a new house in Ballinaclough.

But her life was shattered with the death of her husband just one year later.

“I had three beautiful children, twin boys Mícheál and Sean and my daughter Una. I had the privilege of working near home and got a Consultants Post in Barrington's / Bons Hospital Limerick and a Senior Lecturer Post in University of Limerick. We then bought a beautiful home in Ballinaclough and life looked like it was finally beginning to take shape. Alas that was not to be as my husband died over four years ago, only one year after we moved into our new home,” she recalled.

Howevr, with the support and help of family through her parents Sean and Una, and siblings Winifred, Dolores and Sean D, as well as her children, patients and friends, she picked herself up and got through the next few difficult years.

“Henceforth The Next Chapter came to be born. I decided it was time to use the talents I was given and try to move on with my life and with that in mind I wrote the title song called The Next Chapter which is sung by one of my twin sons Mícheál who has just turned 13. Mícheál spent the first three weeks of his life on a ventilator and it was very much touch and go so it is very precious that he is singing this song,” she said.

Among the tracks on the CD is a song called The Lake Near Killaloe, which she specially wrote in memory of the late Munster and Ireland rugby legend Anthony Foley.

Also taking part will be Ned Kelly with his orchestra In Tune For Life which includes four of her nieces, Laura, Caoimhe, Clare and Emily; Silvermines Folk Choir, Laura Boland Carey, Lissenhall Musical Group, and her 10-year-old daughter Una, a pupil of the Flynn O Kane Academy will dance.

Dr Mary has chosen the Irish Heart Foundation as beneficiaries of the proceeds from the CD.

“The reason I choose the Irish Heart Foundation as the charity is that I admire greatly the work they do in preventing heart disease. As an Endocrinologist who specializes in Diabetes I deal a lot with heart disease, as three quarters of all diabetics die of heart disease. In an environment where services are being cut, the role of defibrillators in saving patients life's is paramount and to date has saved multiple life's. However there is no point having defibrillators in the Community unless people are trained on how to use them and this is where the Irish Heart Foundation plays a vital role as they train all volunteers,” she said.