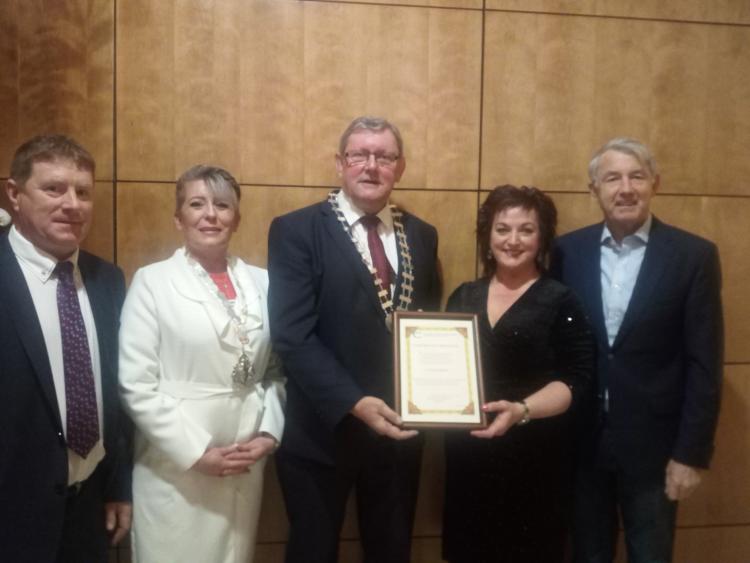 Since bursting onto the Irish country music scene in the late 1970’s, Bansha singer Louise Morrissey has enjoyed a career many performers can only dream of.

This year, the talented performer and one of Ireland’s top entertainers, celebrates 30 years of success in the music industry with her band and the release of her 18th album entitled ‘What’s Another Year.”

“I’m very lucky that I’ve been able to enjoy over 30 years in the music industry and a lot of that is down to a loyal following that have been with me from the very beginning,” the multi award winning singer tells the Tipperary Star days before she is due to jet off on a short tour of the US.

And to mark her success, Louise was recently presented with the prestigious Cathaoirleach's presentation surrounded by friends and family during a concert in the Hotel Minella, Clonmel.

“I was absolutely delighted,” she says of the top honour which was awarded in recognition of her contribution to the music industry.

“It means the world to me to receive an accolade like this from my home county. No matter where I am I will always be a proud Tipperary woman singing about my home county,” she adds.

While still a teen, Louise performed alongside her brothers Norman and David as part of the highly successful folk group ‘The Morrisseys.” However in 1988, Louise decided to follow in the footsteps of fellow country stars Philomena Begley and Ray Lynam and embark on a career in the country music scene with her very own band.

Her first hit ‘The Night Daniel O’Donnell came to Town' was followed up with the equally popular ‘Tipperary on My Mind’, cementing Louise's status as one of the country's top young entertainers when she won the European Gold Star in the 1990 Country Music Masters.

However in 1993, Louise's career was hit a blow when she was seriously injured in a head on collision while travelling to a gig. Despite a long, painful recovery, Louise bounced back and regained her seat at the top of the charts, filling venues across the country and beyond.

During her career Louise has toured the UK with Foster & Allen, Charley Pride and Dominic Kirwan as well as being invited to open for Kris Kristofferson in Newfoundland and Nova Scotia in Canada. Among her contemporaries in Ireland she has toured with "The Queens of Country" featuring Philomena Begley, Billie Jo Spears, Lynn Anderson, Jeannie Sealy as well as "The Irish Queens" featuring Sandy Kelly, Philomena Begley, Gloria, Margo and Kathy Durkin.

“It can be a difficult business to be in and the easiest part is definitely getting up on stage but I wouldn't change it. It's been very good to me and I'm not planning on stopping anytime yet,” she adds.

And 2018 is indeed a busy year for Louise with several tours including the UK in March with Derek Ryan, the USA in April with Gary Gamble, an 18 night Concert Tour of the UK in September and October as part of Stars Of Irish Country Tour, Jimmy Buckley's Country Music Holiday in Spain and a five night special concert tour of Newfoundland Canada in October.