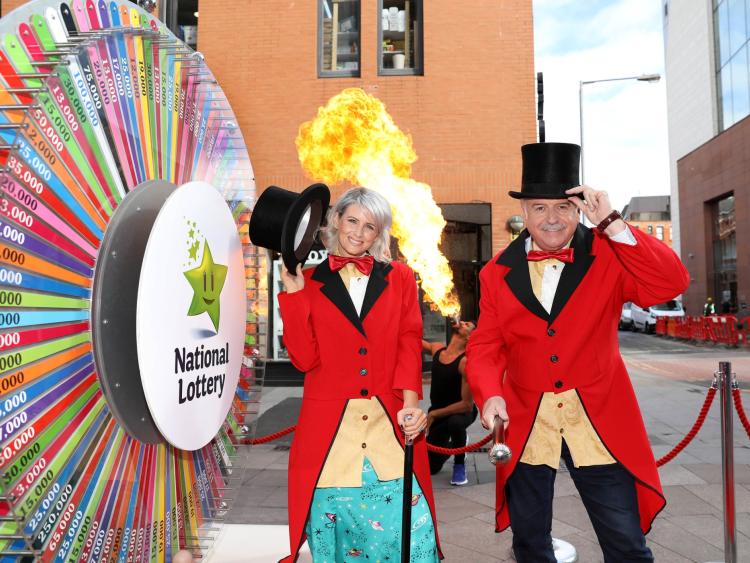 Two women from County Tipperary will be dreaming of a spin of the Winning Streak wheel when they appear on the National Lottery TV game show on RTÉ One this Saturday (March 9).

Roscrea's Eileen Coone and Coalbrook's Roz Fitzgerald (playing on behalf of her dad, Billy Hanley) will take to the Winning Streak stage alongside show presenters Marty Whelan and Sinead Kennedy with high hopes of winning a small fortune.

Eileen’s only daughter Margaret was just a few weeks old when she bought a Winning Streak scratch card for the first time. On the scratch card she got three stars and believed that she was a dead cert to go on the show, with her newborn daughter bringing her luck. Eileen’s name never came out of the Winning Streak drum the following week, but 30 years later it did. This weekend, as Eileen takes to the Winning Streak stage in RTÉ, Margaret will also turn 30 years old. For the Roscrea woman, her luck is better 30 years late than never.

Eileen is mother to six adult children. As well as Margaret, her only daughter, she has five sons who - Seamus, John, Ciaran, Brendan and Michael – live in Croydon, London. She is also a grandmother to 16 grandchildren.

Roz Fitzgerald from Coalbrook, near Thurles, was at home last Saturday when a few text messages came through asking was her dad’s name pulled out to appear on Winning Streak. Roz wasn’t sure as she hadn’t heard anything, but flipped on the television and put on the show. As the end credits revealed her dad’s full Thurles address, she knew it was him and she called him at once.

The next day Billy and Roz’s mum, Theresa, asked Roz to go on the show for him, which Roz is more than delighted to do for her dad. Roz is one of two children and has three children of her own – Rory, Hayley, and Cara - with her husband of 12 years, Ritchie. The whole gang are looking forward to the trip to Dublin to cheer Roz on this weekend.

During the day, busy mum Roz works as a special needs assistant with the Brother of Charity Services at at Tigh mac Gamhan. She has worked there for more than 20 years.

Winning Streak features some perennial favorite games along with brand new games including Play or Pay, Roll for Riches, WinFall and Electric Dream where one player will win an electric car worth €25,000.

As ever, one of the lucky five players will get the chance to spin the wheel and win up to €500,000. A €100,000 segment will be added to the iconic grand prize wheel every show if less than that was won in the previous show, improving players chances of winning a massive prize.