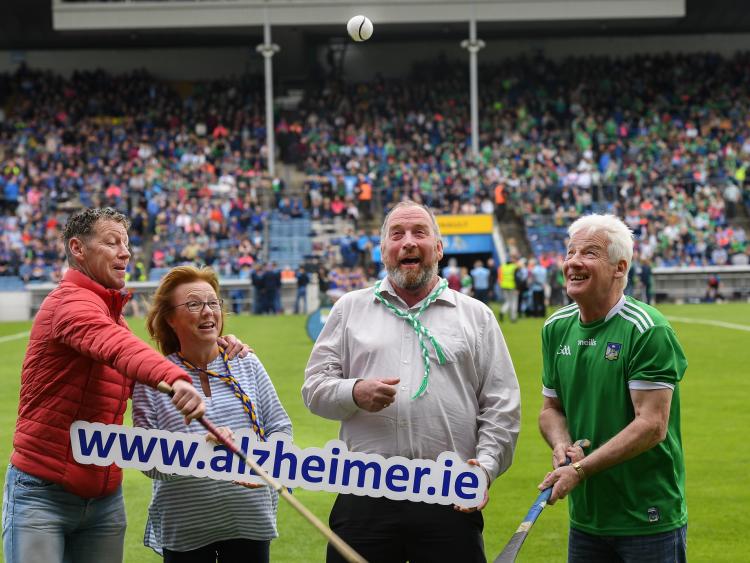 Former manager of the Tipperary senior hurling team Michael Ryan has joined a host of players who have pledged their support to take part in the mouth-watering Tipperary v Limerick legends hurling clash to raise vital funds for The Alzheimer Society of Ireland during World Alzheimer’s Month this September.

The unique fundraising initiative, which was launched by two leading Munster dementia advocates, Kevin Quaid and Kathy Ryan, who both have a dementia diagnosis, at Semple Stadium in June, will be held on Saturday, September 7th at Nenagh Éire Óg grounds (5pm throw-in).

The Tipperary legends who have signed up to support the game are Michael Ryan, Michael Cleary, Declan O’Meara, Eddie Tucker and Brian Gaynor. And, on the Limerick side, the legends that have signed up are Joe Quaid, Ciaran Carey, T J Ryan, Mike Nash, Gary Kirby, John Quaid and Gerry Quaid. More legends will be announced in the coming weeks.

In addition to this, prominent GAA journalist Damian Lawlor has been confirmed to do MC, match commentary and a Q&A with the players afterwards and the Liam MacCarthy Cup will also be present on the day and at the evening reception after the match.

Tickets for the event can be purchased via Eventbrite at €15.00 for adults and kids going free with all the money raised going towards providing community services and advocacy supports in the Munster area and beyond.

This fundraising initiative was the brain child of the dynamic duo, Kevin and Kathy, over a cup of tea when they were discussing ways to give something back to The ASI after everything the charity had done for them – so the inaugural ‘Kevin Quaid and Kathy Ryan Legends Cup’ was created which will bring Tipperary and Limerick hurling legends of yesteryear together to battle it out for the prize in Nenagh.

Dementia advocate Kevin Quaid, who is originally from Broadford in Co Limerick but now living in Kanturk, Co Cork, was diagnosed with Lewy Body Dementia in 2017 aged just 57, is an avid GAA fan and speaks about the fighting spirit of the Limerick hurling team and the fact they never gave up. Kevin is a member of the Southern Dementia Working Group, supported by The ASI.

Dementia advocate Kathy Ryan was diagnosed with Younger Onset Alzheimer's in January 2014 at the age of 53 and is a mother to two boys and lives in Cashel, Co Tipperary. Kathy got involved in advocacy work because she wants to break down the stigma of dementia and this September will be taking part in The ASI’s Camino Adventure fundraiser after successfully completing it last year. Kathy is Vice-Chair of the Irish Dementia Working Group supported by The ASI.

Member of the Southern Dementia Working Group (SDWG) Kevin Quaid said: “I love hurling and played, coached and loved watching Limerick win the All-Ireland final. My second cousin is the goalkeeper on the team. I watched the final in local pub in Limerick; I wanted to be with my people. I really enjoy going to the pub a lot – I feel that we are all the same when we are on the bar stool.  I want to make a difference and with this legends match to shatter the stigma around dementia and to raise money for vital supports and services.  There is a stigma around dementia; there is no doubt about it. That’s why we are hosting this match – to step out of the shadows. I really want people to get behind this fundraiser – buy a ticket yourself or buy one for a friend. Just come down and support us and the Tipperary-Limerick hurling legends.”

Vice-chair of the Irish Dementia Working Group (IDWG) Kathy Ryan said: “The vast majority of people diagnosed with dementia want to live in their own home and stay active and involved in their own community.  In order for this to happen we need our communities to become more dementia aware, to understand some of our needs.  This hurling legends match is a perfect way to bring dementia into the heart of the community.  When a community is dementia aware, it makes the difference between us living as well as possible or staying at home behind closed doors, which has a hugely negative impact on our health and wellbeing. We have received so many warm wishes from both counties and beyond so far – we are really grateful for this. I really hope the public will get behind us and support the legends match.”