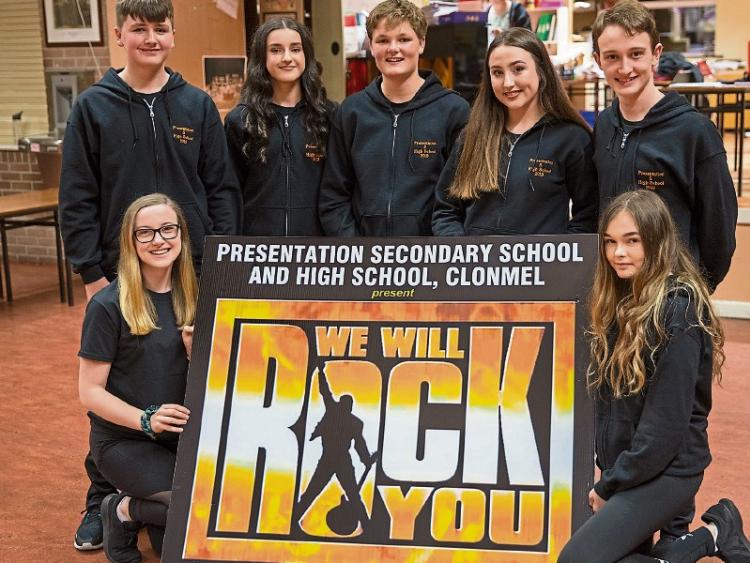 Above - Principals appearing in the musical We Will Rock You, which will be staged by Presentation and Clonmel High School students at the White Memorial Theatre in Clonmel from next Monday-Thursday, October 21-24. From left, Caoimhe Woods, Josh Denn, Eve Whelan, Oisín Crowe, Sophie Pyke, Sean Casey and Desiree Haran McCarthy

This year the Presentation Secondary School and CBS High School in Clonmel will perform the Broadway smash hit, We Will Rock You, as their joint annual musical.

Taking place in the distant future, the story of We Will Rock You exists predominately as a framework to allow the cast to perform covers of the band Queen’s greatest hits.

Earth’s name has been changed to Planet Mall. Everyone wears the same clothes, thinks the same thoughts and goes about in a brain-dead haze.

Musical instruments and composers are forbidden by the Killer Queen (Sophie Pyke), and rock music is all but unknown. However a small group of Bohemians struggle against the Killer Queen and her Commander Khashoggi (Seán Casey) to restore the free exchange of thought, fashion and (most of all) live music.

Auditions for the show were held in August and nearly 60 students were lucky enough to make it into the cast.

Director and producer, Jennifer Williams, said the cast are among some of the most hard-working and enthusiastic that she has ever worked with. Musical directors, Siobhán Alley and Olga Gannon are delighted to be teaching the wonderful music of Queen to the students.

The show will take place from Monday-Thursday, October 21- 24 in the White Memorial Theatre and tickets are now on sale from either the Presentation or the High School.

Tickets cost €10 on Monday and €12 from Tuesday–Thursday.

For more What's On in Tipperary read Students at St. Ailbe's school can't stop the beat