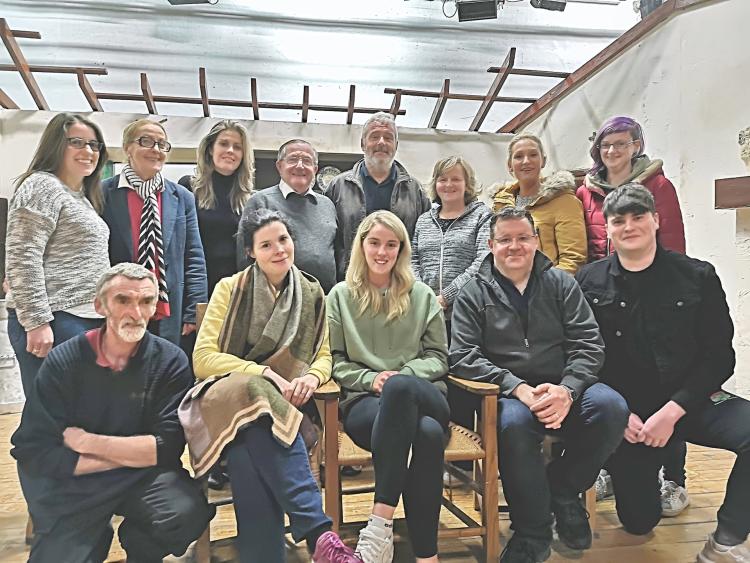 Current All Ireland holders Holycross/ Ballycahill Drama Group are busy rehearsing for their upcoming play Sive by John B Keane.

2019 has been a busy and very successful year for the drama group with appearances at festivals the length and breath of the country and performances at Writers Week in Listowel and Athlone. However the icing on the cake was winning the All Ireland Confined Drama Finals in Doonbeg.

This year Holycross/ Ballycahill will take on one of the country’s best known plays in the form of John B. Keane’s Sive.

For the first time Jacqui Lacey is directing the group, better known for her on stage performances she is now at the helm, everything from set, lighting, sound, costumes and directing a large cast are in her capable hands and it must be said she is doing an excellent job.

Sive is a story of greed, tragedy, love and loss, a young girl sold into marriage to a man old enough to be her grandfather with no regard for her wellbeing or wishes, this sad story unfolds before our eyes with tragic results.
Holycross/ Ballycahill Drama Group are blessed with a strong cast and crew and they are also delighted to welcome some new members this year.

Adam Skeffington from Cashel has been involved in many shows with Cashel Community school also Tipperary and Limerick musical societies. He is studying performing arts in Limerick but this is his first ever play and he is really enjoying the experience.

Siobhan Ryan from Leugh is brand new to drama. She is currently studying business in Templemore and is also the sound operator for the group’s stage run.

“We are thrilled she has decided to join us and hope it is only the beginning of Siobhans involvement with drama,” said the group.

Aisling Henchion is superb in playing the title role of Sive while Breda Lacey is no stranger to stage and is an award winning actress in her own right. She has acted with New Inn for many years and the drama group say they are excited to have someone of her talent treading the boards in Holycross.

While Jim, who is a founding member of the group last acted on stage in the late 70's, he is always on hand when needed, be that in the kitchen serving teas or as group photographer, a real team member and the group are delighted he is joining them once again.

The crew of Miriam Lanigan, Catherine Lowry, Claire Ryan, Andy Slattery and Paddy Connolly are as usual the strength behind every performance but a special thank you must go to Paddy Slattery for his help and generosity in lending props and even boots from his Heritage Centre in Cormackstown, a fantastic museum and well worth a visit.