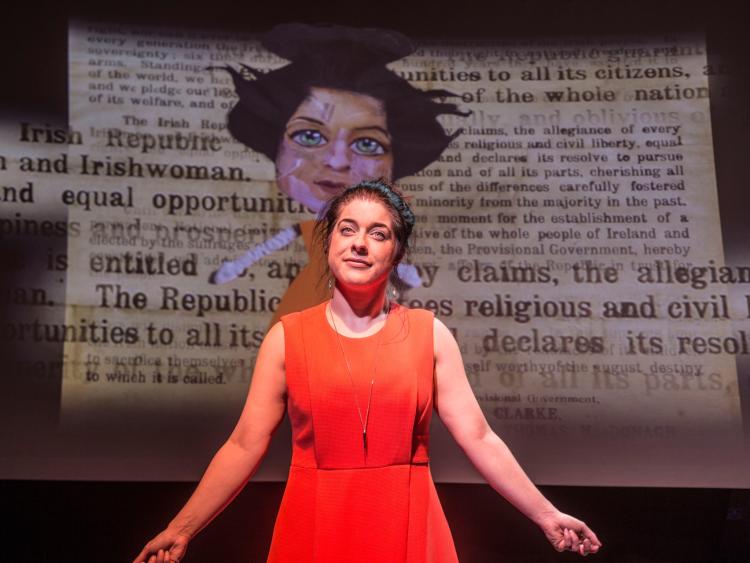 From: I was born in London but we moved back to Limerick - my mum’s hometown – when I was 6 and I grew up here, went to college here and after some time away, have been living here again for the past 10 years.

How many years have you been performing: I’ve been performing in one way or another since I was a small kid but full time, professionally for about 12 years.

When did you get your big break: Making the break from performing other people’s work to writing and performing my own was the most significant thing I’ve done career-wise. I still can’t get over the success Eggsistentialism has had. Awards, amazing reviews, performances all over the world. I feel very lucky.

Highlight of the year so far: I probably have to say the birth of my first child, the very cute Rowan. He’s a lovely little dude and him and his dad are on the road with me now as I tour the country which is great fun.

Best on stage moment: After my last performance of Eggsistentialism at Edinburgh Fringe in 2017, the venue director bounded onto the stage with a bottle of champagne to announce I had won the Melbourne Fringe Award and would be going to Australia with the show! It was totally unexpected and a magical way to end the run.

What's the biggest issue in Ireland today: The housing and homeless crisis. It’s just unthinkable that we’re in this situation.

Best thing about Tipperary is: I once stayed in a brilliantly eccentric B&B in Thurles that I often think of fondly. I checked in to find a washing machine (mid-cycle!) in the bedroom and a ham sandwich on the bed. I wasn’t entirely sure the sandwich was for me but I decided to eat it anyway.

Last person you spoke to on the phone: My mother Gloria. I speak to her a few times a day, we’re very close. She’s also my hilarious co-star in Eggsistentialism and plays herself in recorded audio in the show being the quintessential, pass-remarkable Irish mammy.

Favourite album: At the moment I’m really enjoying Amanda Palmer’s There Will Be No Intermission. It’s a raw, 20-song long opus that’s beautifully crafted and just bursts at the seams with refreshing, relatable honesty. In one track she sings “I’m even scared to put these lyrics in a song”. I’m not surprised but I’m really glad she did.

TV show: My favourite go-to, switch off, wind down show is Gogglebox. The reactions are gas, the voyeuristic thrill of getting a nose into other people’s lives, living rooms and family dynamics is brilliant, the meta ‘ooh, look we’re watching telly of people watching telly’ is fun and it’s often really insightful as well.

In ten years I'll be....Oh god, planning my 50th! I hope all my bits will still be attached and that I’ll be happy, still making work that I enjoy and having fun knocking around the place with my 10 year old son!