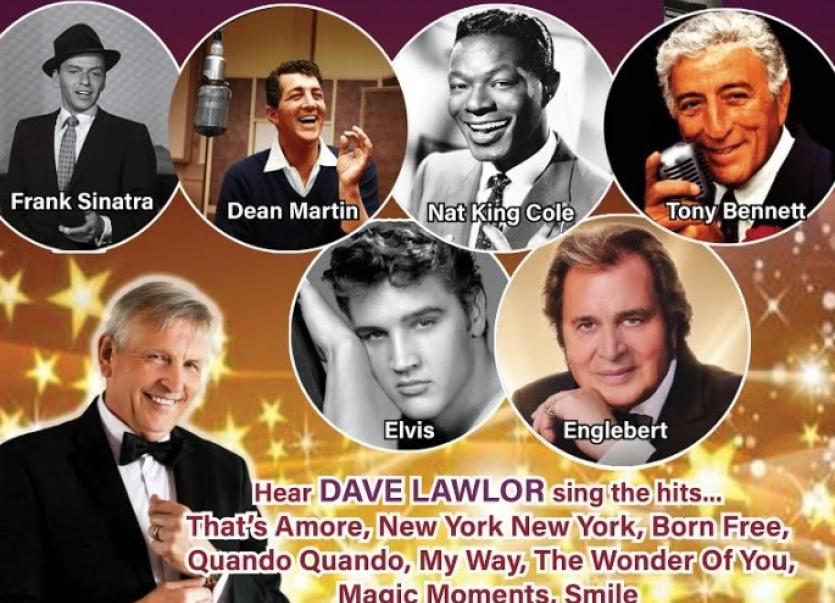 A Salute to the Crooners at Brú Ború on January 18

Following its sell-out performance, the spectacular show A Salute to the Crooners featuring Dave Lawlor makes a welcome return to Brú Ború Theatre in Cashel, County Tipperary, on January 18.

Prepare to be spellbound as one of Ireland’s greatest singers pays tribute to the songs of Frank Sinatra, Andy Williams, Matt Monro, Tony Bennett, Nat King Cole, Elvis Presley, Engelbert Humperdinck, Perry Como and Dean Martin. Not only do you witness the crooner classics come to life with Dave’s velvet voice, but also see the fabulous portrayal of images of all the artists. 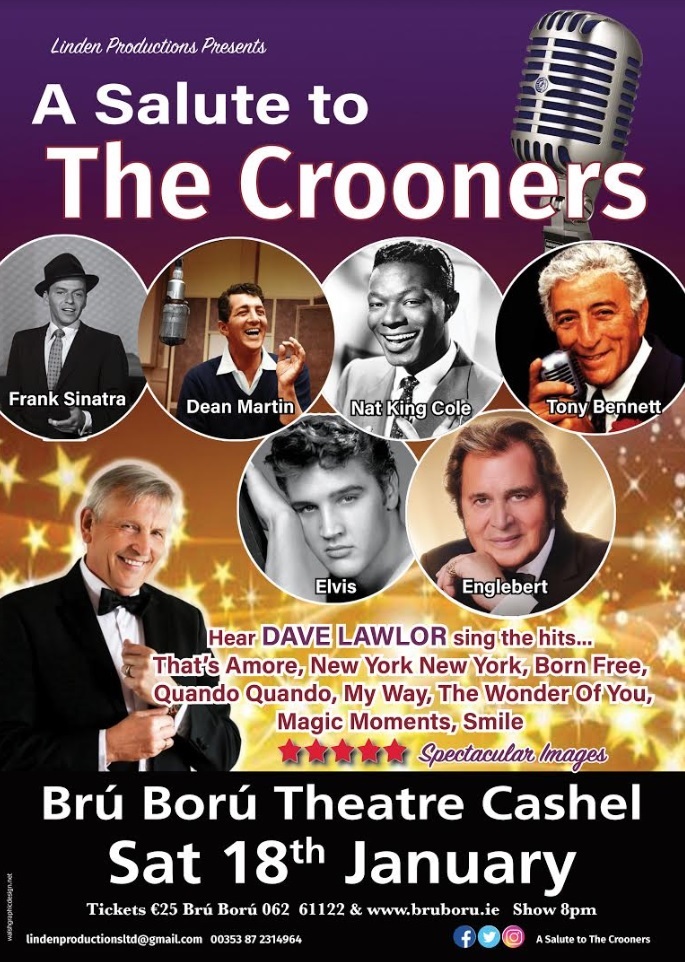 With a career spanning over 30 years, Dave Lawlor - star of the highly acclaimed Reeling in the Showband Years Show - was chosen by music promotions company Linden Productions to front this unique audio visual show.

Only an entertainer of Lawlor’s exceptional calibre could pay homage – accurately, respectfully and with the appropriate humility – to so many musical icons in one show.

Acknowledged by his contemporaries as one of Ireland’s best singers, he has received many accolades to date, including three top ten hits in the Irish charts. Lawlor will bring the audience through the great crooner songbook with some of the best known hits of the 20th century such as ‘Born Free’, ‘New York, New York’, ‘Portrait of My Love’, ‘The Wonder of You’, ‘Sway’, ‘Please Release Me’, ‘Moon River’, ‘My Way’,  ‘Magic Moments’, ‘Quando Quando’ and many more.

Asked for his favourite among all of those golden greats, he smiles: “If I was to pick the one that touches me most, it’s the one we finish with, ‘My Way’ by Frank Sinatra.  At my stage of life and career, that song means a lot to me. And it means a lot to everybody in the audience too. A lot of young people are interested in the music, and they love it. But the majority of the audience might be of my own age group. But really, ‘My Way’ is such an iconic song that it touches everybody in some way, I think.”

Sit back, relax and sing along as he takes you on a nostalgic trip down memory lane, superbly enhanced by the rare images of the stars, in the beautiful Brú Ború Theatre on January 18. Tickets are €25 from the  Brú Ború box office on 062-61122 and online on www.bruboru.ie.