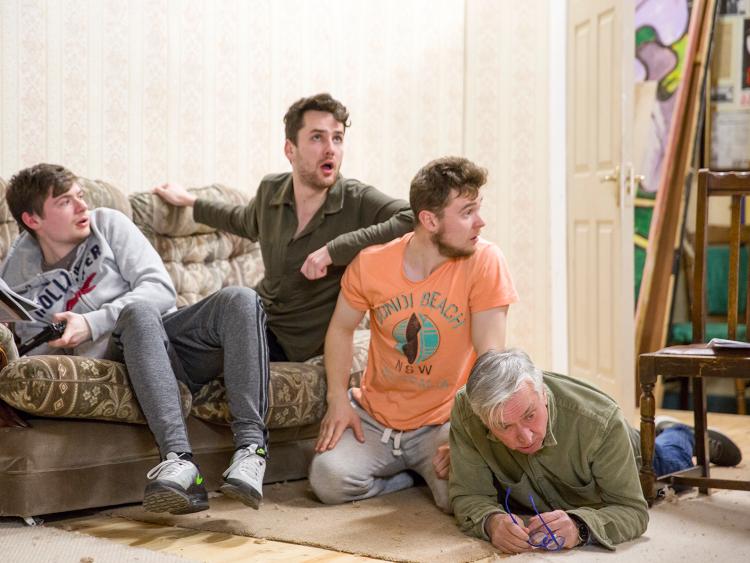 The Nenagh Players will present the hilarious Brownbread written by Roddy Doyle and directed by Donal Bray at Nenagh Arts Centre from Wednesday, February 26 to Sunday, March 1.

Several of Doyle’s books have been made into films, beginning with The Commitments in 1991 and include The Snapper and The Van.

Brownbread is set in Barrytown, a suburb of North Dublin in a corporation estate. The play centres around three young lads Donkey (Adrian Fahy), AO (Colin Dillon) and John (William Casey Boyle) who accidently find a gun and decide to kidnap the bishop (Seamus McCarthy). The guards (Sean Butler and Stuart Andrew) soon catch up with them at Donkey’s parents’ home where the trio find themselves under siege.

Things reach a whole new level when the American marines (Kevin Prout and Paddy Rohan) are sent by the US President to the scene as the Bishop has an American passport.

The three boys soon realise their great adventure was nothing more than a massive mistake.

The Nenagh Players are delighted to have Donal Bray as director for this production. Donal directed Duet for One and What Happened Bridget Cleary for the groups All Ireland Drama Festival Circuit productions to much acclaim.

The drama group are delighted to be supporting Carmha with their gala night on Wednesday 26, with a wine and cheese reception in Rocky's bar from 7pm.

Tickets for the gala night cost €20 and can be purchased from the Nenagh Players committee or from Carmha, 81 Silverstreet and The Wine Buff Cecil’s Walk, Kenyon Street, Nenagh.

Nenagh Players will present Brownbread in Nenagh Arts Centre from Wednesday, February 26 to Sunday, March 1 at 8pm each night.

The play promises to be a great night of entertainment so don’t miss out.
Tickets €16/13 for performances February 27 to March 1. Contact Nenagh Arts Centre on 06734400 or visit the website www.nenagharts.com for more information.