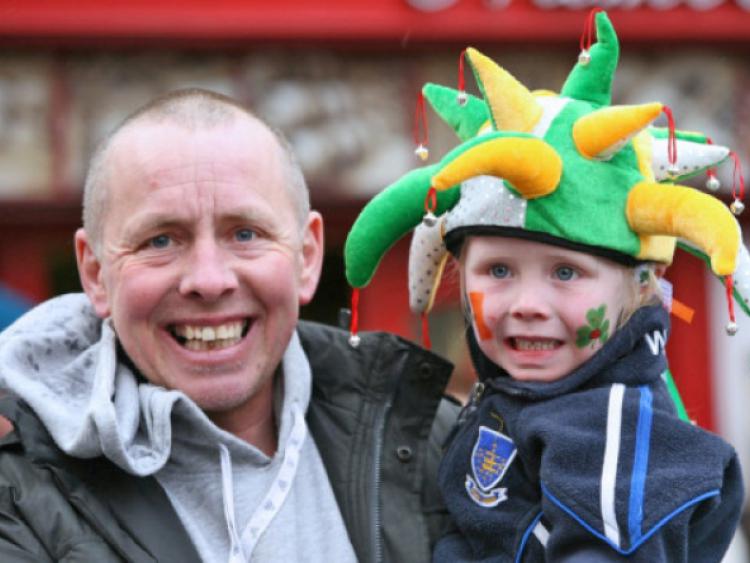 St Patrick led the Carrick-on-Suir parade in true celebrity style waving to the crowds lining the town centre from the back of a gold open top Triumph car.

St Patrick led the Carrick-on-Suir parade in true celebrity style waving to the crowds lining the town centre from the back of a gold open top Triumph car.

The Triumph and its special guest brought up the rear of a cavalcade of vintage vehicles from the Slate Quarries Vintage Car Club that opened the town’s fifth annual parade.

The people of Carrick-on-Suir and its surrounding communities turned out in force to support the celebration despite the unpredictable March showers, one of which rained heavily down on spectators and parade marchers half way through the pageant.

The hundreds who gathered on Main Street to watch the spectacle made a big effort to look as colourful as the parade participants. There was a big rush to purchase Paddy’s Day accessories at the Euro Giant Discount Store on the street just before the event.

The parade that kicked off at 3.30pm featured 24 entries representing every aspect of Carrick-on-Suir’s rich social, sporting and cultural life.

Fire tenders and rescue boats from Carrick-on-Suir Fire Station and River Rescue followed the fleet of vintage cars and tractors and there was an ambulance from the local Red Cross Branch.

The town’s many sporting clubs from GAA, soccer and rugby to taekwon-do and kickboxing were represented by hundreds of their young members, who walked in the parade wearing their club colours as were the town’s scouting and girl guide groups and some local schools.

A notable absence from the parade was the Carrick Swan Club, which pulled out at the last minute due to the tragic death of 23 year-old Craig Walsh, one of the Club’s star senior hurlers, in a car accident on Saturday. The Flute and Drum Band marched in the parade with their flags rolled up as a mark of respect to the young hurler and his family.

Chairperson of the St Patrick’s Day Parade Committee Kathleen Fahey said apart from the heavy rain and hailstones shower during the parade, they were delighted with how well the event went this year.

“It was a fantastic and colourful occasion and was well received by everyone,” she told The Nationalist.

However, she pointed out that the St Patrick’s Day celebrations in Carrick-on-Suir were tinged with sadness due to the tragic death of young Craig Walsh, whose family was well known in the town.

She extended condolences, on behalf of the Parade Committee to Mr Walsh’s family.

Ms Fahey, meanwhile, thanked all the parade participants and all the volunteers involved in organising the celebration. She particularly thanked Carrick-on-Suir Business Association and Carrick-on-Suir Town Council for their donations towards the running costs of the parade, all the volunteers who put up bunting around the town and all the schools that participated in the St Patrick’s Day bunting competition. She also thanked Gda Sgt Ian Barrett and the Civil Defence for their assistance.

The St Patrick’s Parade Committee is looking for more volunteers to get involved in organising next year’s event.

“If the parade is to go ahead next year, we definitely need more volunteers,” said Ms Fahey. “There are only six of us on the committee and the event has become too big to be run by so few,” she said.

Ms Fahey suggested that a volunteer from each of the 24 groups that took part in this year’s parade join the committee.

Mayor of Carrick-on-Suir Cllr Liam Walsh has echoed Ms Fahey’s call for more volunteers and her thanks to everyone involved in organising Sunday’s parade.

Meanwhile, the St Patrick’s Day Parade Committee will visit “The Rising Star Variety Group and Caroline’s Traditional Musical School over the next week to present them with their awards.

and Marty’s Pantry on Sean Kelly Square to present its owner with the Best St Patrick’s Day Shop Window Display.