It is with deep regret that we record the sad death of Mrs. Breda Hall, Kyle.

In her mid eighties, she was choir mistress here for some years. A fully qualified chemist, she was always ready to give advice and help when required. She will be sadly mourned by all. Her remains were removed from her home to the Parish Church in Drangan and following Requiem Mass by Archbishop Dermot Clifford and Rev. Fr. John McGrath P.P., Mullinahone, interment took place in St. Mary’s Cemetery.

To her son, daughters, sisters, grandchildren, relatives and friends, our sympathy is extended. Ar dheis de go raibh a h-anam.

A recent Church Gate Collection for the Irish Cancer Society amounted to €481 and has been sent to the authority. Thanks to all who helped.

Well done to James Clancy U.14, Denis Clancy U.10 and Eimear Boland U.10, who competed in the swimming last Saturday and Sunday in Clonmel Pool. While we didn’t bring home the medals, they all did very well in their individual events.

Change of date for Tag Rugby: this is now taking place on Friday May 20 at 6.30pm sharp in Fethard Rugby Club. Training is in Drangan on Thursday May 19 at 6.45pm sharp.

Weather permitting, we will run the Athletics evening on Wednesday May 25 in Cloneen. We will confirm on next week’s newsletter and also let the children know through the schools.

On Sunday evening last, John Moroney came on for the second half of an under 21 challenge between Tipperary and Galway in Lorrha, which ended in a draw. We wish John and his colleague all the best when they play Waterford in the first round of the Munster Under 21 hurling championship in Semple Stadium on Wednesday next June 1.

On Saturday last when Grangemockler won the County Final of Division 3 of the Under 12 football, one of their players was Manus McFadden whose mother is the former Miss Ita Horan of Knockura. When Tipperary defeated Cork in the Munster minor hurling semi-final, two of their most prominent players from Mullinahone had strong St. Patrick’s connections. Cathal Horan’s father Eddie Hails from Knockura while Eoin Fennelly is a grand nephew of Jim and Paddy Quinn of Lismoynan.

When Scoil Ruain Killenaule won the Munster Under 16 hurling final recently by defeating Kanturk 2-13 to 1-13, there were 6 St. Patrick’s players in the squad. They were Daniel O’Riordan, Conor Clancy, Conor Cuddihy, Ivan Brett, Darragh Wilson and Tony Smith. Well done to all.

On this Saturday May 28, St. Patrick’s Under 8 footballers take part in a blitz in Davin Park, Carrick on Suir at 11am with Clerihan, Davins and Fethard. 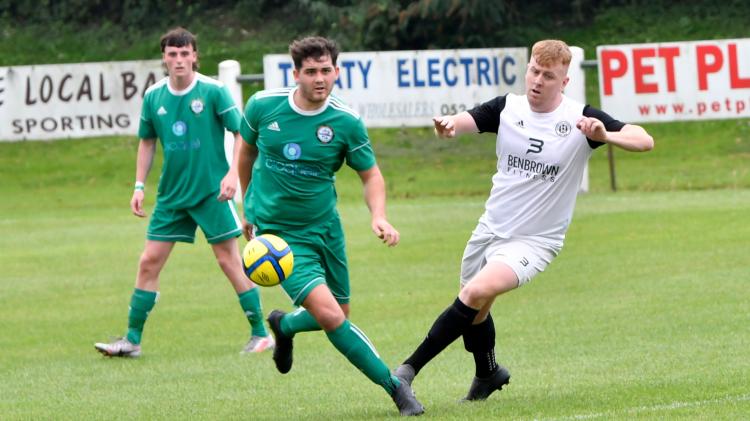 File photo: Graham Kelly (right) was among the goals for Wilderness Rovers in a thrilling 3-3 draw with Clonmel Town on Sunday last.