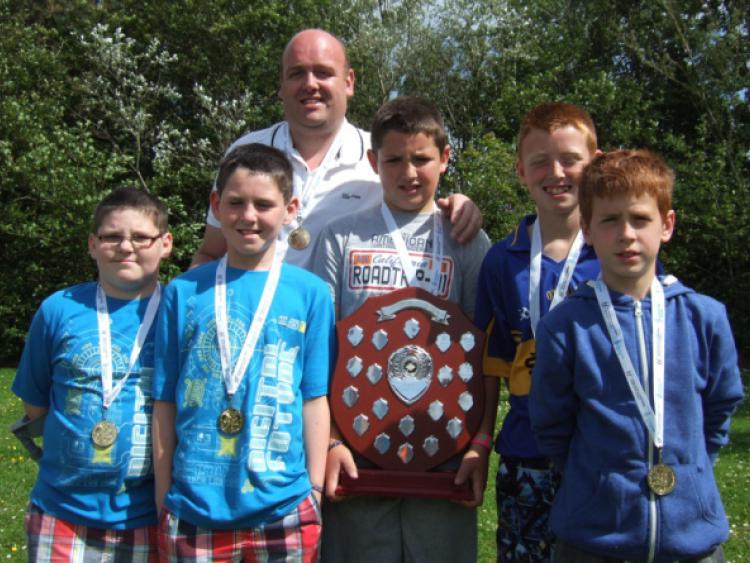 Ballingarry area were the stars of the show once again with a double victory winning gold medals in both the under 12 and under 14 Mixed Skittles events. These two excellent teams under the management of Jesse Donovan justified the high expectations shared by many who witnessed the high performance given by them when winning the County Finals in Hillview Sports Centre, Clonmel last May.

The finals were played in Tralee IT, after an unpleasant start to the morning, the Anglim team arrived from Clonmel along with the sunshine. The expertise of Matt, Adrian and Veronica is now widely acclaimed and they are booked to officiate in the sport at County, Provincial and National level. Even though the day remained dry it was quite windy but this did not deter the teams.

Ballingarry u14 team were first to strike gold defeating Kerry in the semi final and beating Cork by 380 points to 157 in the final. Team consisted of Lauren Donovan, Louise Lawlor, Daniel Lyons, Conor Hayes and Patrick Burns.

The under 12 team beat Kerry by 339 points to 153 in their semi final and faced their old rivals Ballybrown/Clarina from Limerick who were no match for them. Final score was 307 to 245. Team members:- Aaron Dunne, A.J. Dunne, Michael O’Shea,

Stephen Donovan and Shane Burns. They are now looking forward to competing once again at the National Finals in Athlone on the weekend of 16 to 18 August.

Ss. Peter and Paul’s area, Clonmel, also met former opponents Ballybrown/Clarina in their under 16 mixed skittles final but had to be content to add their names to those on the list of Silverware on this occasion. This was the last year of competition for this experienced team who gave us so much enjoyment over the past few years. Nerves crept into their performance a little and effected their judgement which resulted in a score of 273 points to Limericks 370. Thanks to Mary Walsh, Sandra O’Dwyer and everybody who did such great work with this team of Ben Walsh, Annie Coffey, Chelsea Keane, Samantha O’Dwyer and Tommy Coffey and also to their assistant manager, Lorraine Williams, a former competitor.

Others to win Silver Medals were:

U12 Girls 7 a side Soccer Newport beaten by Listowel, Kerry

It is a great achievement to become County Champions and an honour to get the opportunity to play in a Munster Final and savour the fun and friendships which are all part of Community Games .

Well done to Chairman of Tipperary County Board, Andy Griffin, Clonmel who made the trip to the Kingdom to support all the teams and offer words of wisdom.