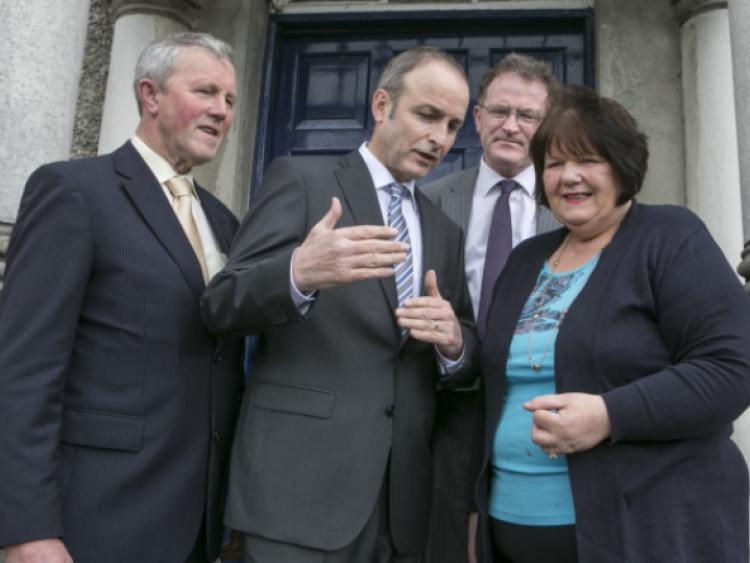 Fianna Fail leader Micheal Martin has ruled out the possibility of Independent Deputy Mattie McGrath returning to Fianna Fail ahead of the next general election.

Fianna Fail leader Micheal Martin has ruled out the possibility of Independent Deputy Mattie McGrath returning to Fianna Fail ahead of the next general election.

Speaking in Cashel last week Deputy Martin stated “Mattie has made it clear he wants to continue as independent and we have our own candidates coming forward.

We don’t have a seat in Tipperary, we will probably adopt a two-candidate strategy for the five-seater constituency (in the general election). We have strong personalities emerging from the campaign for the local elections, we have a strong team across Tipperary so we won’t be short of competition for places but it will be very tough”, he added.

When asked if the electorate is ready to place its trust in Fianna Fail again, to forgive the party and move on, he replied - “I accept we have to rebuild trust with the people but we are getting there. We have been very effective on the opposition benches, leading the charge in terms of holding the government to account. People are responding to our new approach but we still have a journey to travel.

“What we’re getting on the doorstep is that people are more focused on the future. As time moves on they see that the recession was caused by a global collapse in financial and banking systems in the developed economies.

“We’re still not out of the woods in Europe, even though we’ve come out of the immediate crisis with the Euro. There has been too much universal austerity across Europe, and some of the economies like Germany could have done more to increase spending.

“There should have been a greater stimulus plan at European level”.

He identified several issues that people are talking about in the run-up to next month’s local elections. “People are concerned about unemployment and health.

The elderly in particular are very angry with the last two budgets, including the abolition of the phone allowance, the cutting back of the fuel allowance by six weeks, the increase in electricity prices and the property tax on top of that - pensioners are saying that their incomes have been seriously eroded.

Many parents are very worried about the employment prospects for their young people, with young people making up 15% of the live register.

People are worried about access to health care, and in terms of trolleys in A&E and the constant waiting times, and they’re very worried about how the health service will maintain services this year when about €1 billion is taken out of its budget.

“There’s a sense that there will be more pressure on the ambulance service and the acute hospitals such as Clonmel, and the degree to which they can cope with the extra demands on significantly reduced budgets.

“People are worried about the water charges, there’s a lot of anxiety about that coming hot on the heels of the doubling of the property tax. You have some people on €200 odd euros a week but irrespective of one’s income, irrespective of the pressures you’re under, you pay the same amount as someone on a higher income. There’s no relationship between the ability to pay and the whole series of taxes and charges being levied on people”.

Having visited Scoil Cormac in Cashel earlier that day, he said that special needs education was another area of concern.

“The staff and teachers are working under very trying conditions, what’s worrying is the lack of timely access to psychology services and to therapies. In some schools the SNAs have been reduced and that’s a worry for the schools and children. We need a system where the child is at the centre, we need more advocacy for the child with special needs, in health and education”.

On the threat to downgrade South Tipp’s ambulance service, the Fianna Fail leader stated - “We support the idea of having ambulances in the bases like Cashel, where they would be quicker off the mark to get to incidents. The present system isn’t working, although a lot of good work is being done, and the first responder system is very important.