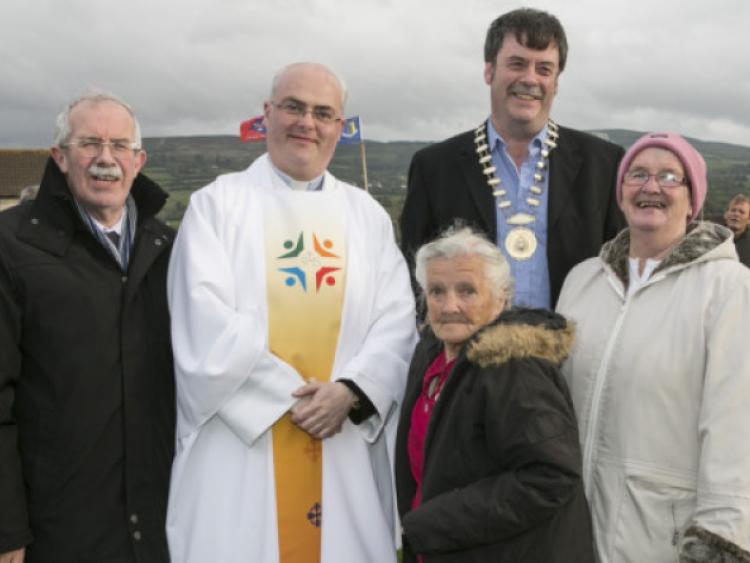 The inaugural open air Mass at Cooleens Close in Clonmel was so successful that itâ€™s hoped to organise it as an annual event.

The inaugural open air Mass at Cooleens Close in Clonmel was so successful that itâ€™s hoped to organise it as an annual event.

â€œThe Mass was a big thing here years ago but it faded out. Now that it has been revived weâ€™re hoping to hold it every yearâ€, said Mary Lawlor, one of the organisers.

â€œAll age groups turned up, it was lovely and the weather stayed fineâ€, she said.

The Mass was celebrated at the restored green area at Cooleens Close. Over the last year and-a-half a wild and overgrown area that was littered with rubbish has been cleared and since then the well-maintained space has proven a great amenity for the residents.

The celebrant was Fr. Michael Toomey, whose parish is Tramore. Although born in London his parents are from Clonmel - his mother, Lil Toomey (nee Gregory) from College Avenue attended the Mass and his late father was Johnny Toomey of St. Maryâ€™s Place.

Deputy Seamus Healy was among the congregation and he was joined by the Deputy Mayor, Cllr. Pat English and members of Clonmel Borough Council including Cllrs. Darren Ryan, Joe Leahy, Siobhan Ambrose and Richie Molloy.

Representatives from organisations and agencies that have offered great support to local people in their efforts to enhance the area were also present including the South Tipperary Development Company, Tus, the Gardai and Clonmel Tidy Towns.

â€œThe residents put a phenomenal effort into preparing the area for the eveningâ€, said Mary Lawlor. Refreshments were served after the Mass.

The next big event at the green will be the Family Fun Day in August, which follows on from last yearâ€™s inaugural community day. Itâ€™s planned to have a family picnic and re-introduce traditional games played years ago to todayâ€™s generation of children.

The area includes an allotment and a memorial wall that lists the names of departed residents. A space for playing skittles has also been provided while the children have their own section of wall on which they paint.

The residents are grateful to everyone who contributed to the success and enjoyment of the Mass. They include companies that provided sponsorship amnd people who helped out including the Clonmel Garden Centre in Glenconnor, Woodies, Superquinn, Chadwicks, Eric Ryan and the outdoor staff of Clonmel Borough Council, Tinaâ€™s Florists, Every Blooming Thing, Clonmel Tyres, Bob Fitzgeraldâ€™s, the Elm Tree Community Centre, Tommy Looby, Margaret (Maggie) Fitzgerald and Milleas in Irishtown.