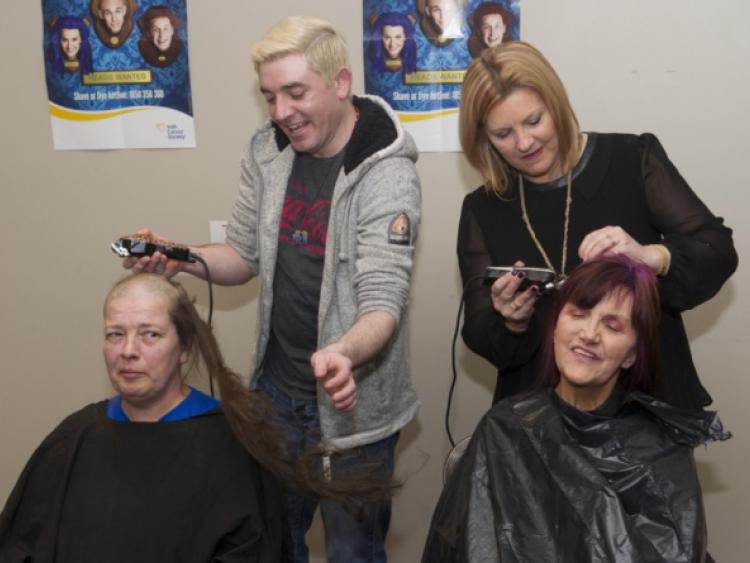 Two Clonmel women who took the brave step of having their heads shaved raised approximately â‚¬1,000 for cancer research.

Two Clonmel women who took the brave step of having their heads shaved raised approximately â‚¬1,000 for cancer research.

Helen Walsh from Willow Park and Anne Marie Crotty from Albert Street had their locks shorn at the Clonmel Park Hotel on Saturday night by local hairdresser Jeri Cronin from the Bizaar salon.

The money will be donated to Today FMâ€™s Shave or Dye campaign, which raises funds for cancer research.

â€œIt was absolutely great funâ€, said Helen Walsh, for whom the date of the sponsored headshave, February 15, had a particular significance.

Sixteen years ago to the day she was told that was suffering from ovarian cancer, which is often referred to as the silent killer.

â€œThe symptoms are minimal, thatâ€™s the scariest partâ€, she says. â€œWomen need to be vigilant because a cervical scan or a smear test doesnâ€™t always show up traces of the diseaseâ€.

Following her diagnosis Helen underwent a full hysterectomy, followed by bouts of chemotheraphy. She is now fully recovered.

â€œI didnâ€™t have a choice when I lost all my hair as a result of the treatment, but now I had a choice and decided to shave my hair for charity.

What saved my life was the research carried out into the disease, and people went to the trouble of raising money to fund that research. The head shave was my way of saying thanks to those people who raised funds prior to 1998, when I was diagnosed with cancer.

Iâ€™m alive today thanks to that research. As well as paying back, I also want to â€˜pay forwardâ€™ so that research will continue to be carried out to save people into the future, and maybe even find a cure for many cancersâ€.

Helen and Anne Marie were delighted that so many people turned out for last weekendâ€™s event, which they say was a great success.

â€œJeri Cronin got the crowd going and that added to the occasionâ€, said Helen, who had most of her hair shaved off on Saturday and who since then has had the remainder cut, leaving her completely bald.

People may donate to the fund until March 11. Anyone wishing to do so should e-mail Helen Walsh at intoaction12@hotmail.com