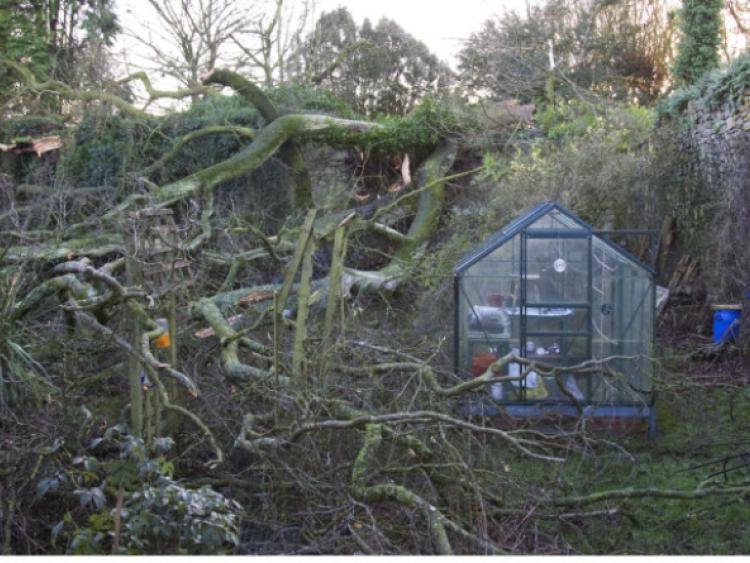 The hurricane force winds which did so much damage nationwide last Wednesday afternoon also left their calling card in City of the Kings and district.

The hurricane force winds which did so much damage nationwide last Wednesday afternoon also left their calling card in City of the Kings and district.

There seems to have been little structural damage to houses although several roofs had slates, tiles and lead blown off that in most cases were replaced the following day.

The same cannot be said for some of our most beautiful mature trees,the scale of the loss here is almost of biblical proportions.

A walk around the town or out any road and one is quickly confronted time and time again with scenes of prostrate leviathans all lying in a west to east orientation, similarities with images of the 1908 Tunguska Impact in Siberia quickly come to mind. Beech and Limes appear to have been the biggest casualties, although in conversation with land owners who suffered big losses, the might Oakâ€™s resistance was broken in quite a few places.

A huge 200 year old one, a familiar landmark to most towns people toppled over in the field in front of the Rock.

A giant beech at the back of the Cashel Palace Hotel fell into Margaret Whiteâ€™s garden in Dominic St causing damage to the boundary wall which is also part of the old Cashel Town Wall, its upper branches almost completely covering the garden, miraculously a glass house survived with only two panes broken.

In St John the Baptist Church cemetery three celtic crosses came to grief. The largest, which was erected in 1890 had its upper part snapped from the base like it had been match wood.

As this monument had withstood everything the elements could throw at it for 124 years, the inference must be that last Wednesday storm was the most severe in that time span.

In a strange twist the monument which is almost completely destroyed was erected in the memory of Michael Ryan, Main St, Cashel who donated the magnificent marble High Alter in the parish church.