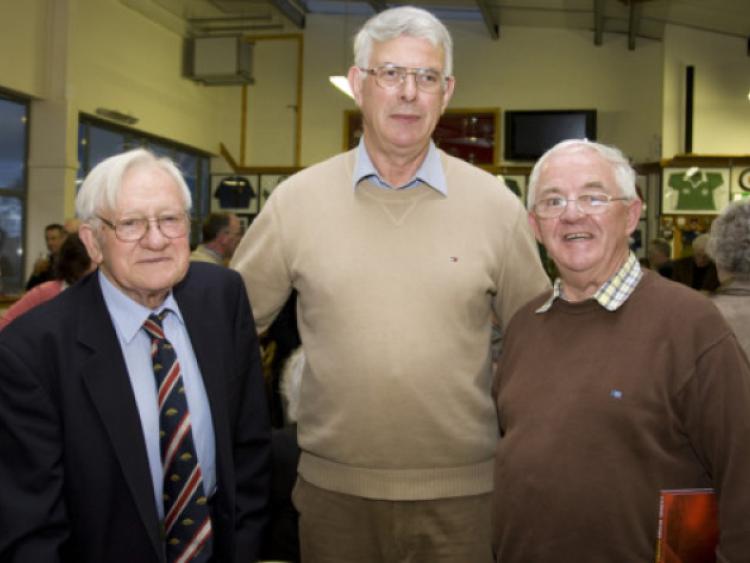 Cashel’s own international rugby star was in town last Friday night to launch a wonderful book detailing the history of Cashel RFC.

Cashel’s own international rugby star was in town last Friday night to launch a wonderful book detailing the history of Cashel RFC.

Part funded by South Tipperary Development Company, the book was two years in the making and chronicles the history of the club from it’s embryonic beginning in the early years of the twentieth century right up to winning the All Ireland Div 2 league title last year. Its 244 pages are jam packed with information which at first glance will naturally appeal to those in the rugby community, but this publication has a much broader base than one might expect of a club history and therefore I suspect will appeal to sports people in general and to those with an interest in local history.

Records of the early years of the club are at best scarce or not at all. Coming so soon after the World War and the War of Independence recording for posterity wouldn’t have been given much though by those in the fledgling club. To get over this obstacle Seamus King trawled through early editions of the Nationalist and Tipperary Star for match reports and anything to do with the club.

As one gets further into the book the amount of information available to the author increases and this is very evident as events are chronicled in greater detail than heretofore. This is a book that one seems to find another gem every time you pick it up, augmented by over 200 photographs which in their own right will be of huge interest. It’s a history, coffee table and reference book all in one, well done to all involved, highly commendable, a must buy.

As an appetizer printed below are snippets from the first chapters of the book.

Cashel and Templemore rugby teams met in the Sportsfield, Cashel, for their tie in the Garryowen Cup League, and a fine sporting game resulted. This is the first season of the Cashel club’s existence, and when it is considered that the fifteen is mainly composed of players new to the code, it must be admitted that the material is very promising.

The Cashel players dominated the game for the greater part of the time, and their grand rushes were often on the point of bringing scores. While saying so much in favour of the home team, we cannot detract from the impressive performance of the visiting team. Their forwards lacked the fire of the Cashel team, but seemed to have a slight superiority in finesse.

The first two scores obtained by Templemore were of a lucky order, but undoubtedly their third was fully deserved. On the run of play the visitors fully deserved their victory, but the scoring is no criterion of the respective merit of the teams.

Dr. A. Foley, Cashel, refereed in a most impartial and effective manner. The final score was Templemore: 2 goals 1try, Cashel nil.

The Cashel UDC have decided to appoint a committee, whose duty it will be to elect a vigilance committee to see that only Irish dances are permitted in Cashel City Hall. ( The venue for the Cashel Rugby Club dances)

Mr. Michael Davern told the Council that their resolution, ordering the City Hall to be used for Irish dances only, had been treated as farcical. Mr. Doherty said they all danced ‘jazz’ in the City Hall. Mr. Davern said they could turn off the electric light when they began dancing foreign dances.

Town Sergeant Kirwan, who is caretaker of the hall, said he would not know the difference between the ‘Walls of Limerick’ and a jazz dance.

The provision of a ‘suitable practice ground’ by James Phelan for the club was an event of immense importance for Cashel Rugby Club. Situated in Spafield, on the Old Road, this venue of eleven acres was to provide an outstanding home for the club. Prior to this time the club played rugby in three different locations.

Initially the venue was in Looby’s field (later O’Leary’s) on the Dualla Road and from about 1932, the club transferred to the Nursery Grounds on the Clonmel Road. After the first revival in 1938, the playing venue was transferred further out the road to what is now Leahy Park.

We have a case of a prominent rugby player in Cashel who won a rugby trophy and an All- Ireland footballers medal in the one year, declared Mr. Paddy O’Brien, at the Tipperary G.A.A. county convention at Thurles on Sunday. Mr. O’Brien was proposing a motion from his club asking that the rules regarding playing qualifications in the Post Office competitions be clarified.

Mr. O’Brien said that the person referred to had already been a suspended member of the Cashel G,A.A. Club. It had been thrown in their faces, he added, that they had no rules in the G.A.A. The man he went on, won a medal in Croke Park and received it from the Secretary General of the G.A.A.

During the first half of the 50s a particular rivalry existed between Clanwilliam and Cashel. The two sides invariably met each season when contesting the local trophies.

These matches, whether at Cashel or Clanwilliam, always drew a fine crowd. For example, in 1956 circumstances dictated that Cashel and Clanwilliam played each other on four successive Sundays, proving that is not possible to have too much of a good thing.

When the news of Ballmoss’s victory in the Prix de Arc de Triomphe was first heard in Cashel on Sunday afternoon, there was instantaneous rejoicing, residents rushing out on the streets to break the great tidings.

Players and spectators alike at Spafield Park, where the fifth annual friendly rugby football match between Lansdowne and the Cashel Selected was in progress, momentarily forgot about the game and broke into spontaneous cheering for Mr. O’Brien and his famous change. It was due to the kindness and sportsmanship of Mr. Jack Fogarty that he made the happy announcement through the loudspeakers he had been using to keep the crown informed of important notices.

Having heard through the medium of a motor car radio Micheal O’Hehir’s broadcast of the Ballymoss success, Mr. Fogary immediately made the announcement amid loud applause.

Book on the history of Cashel RFC is now on sale

Congratulations to club man and former President of Cashel RFC Peter Silke whose hard work over the last two years came to fruition last Friday night with the launching of the Cashel RFC Book. The book is a collection of stories, events and full of photo’s starting from the foundation of the club in 1919 right up to 2012, the club’s first year as a senior club.

This book is a must for anyone that has had any involvement with Cashel RFC over the years. It costs €20 and is available from: Supervalu Cashel, Spearman’s Tea Rooms, Buckley’s Grocery, Centenary Co Op and O’Dwyers Pharmacy Main St.