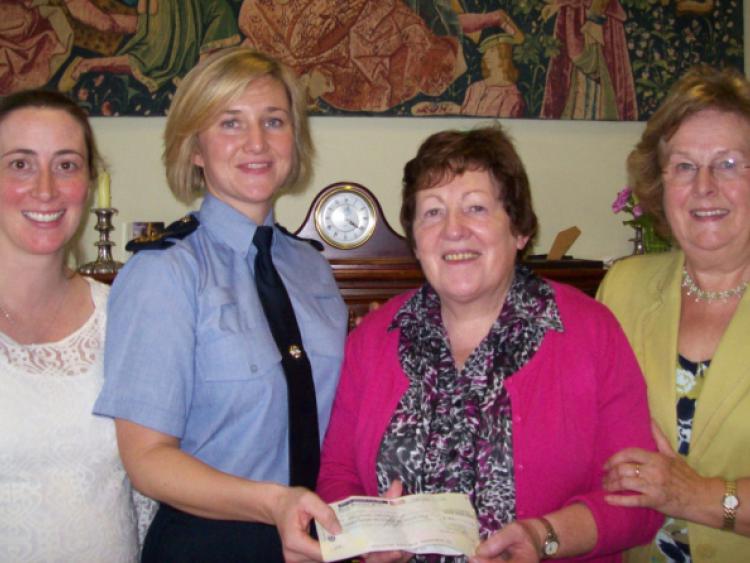 The importance of Cahir Day Care Centre to the local community was celebrated last week as the centre marked nine years of welcoming older people from the area.

The importance of Cahir Day Care Centre to the local community was celebrated last week as the centre marked nine years of welcoming older people from the area.

Not only was it a day for marking the anniversary but on the day the centre was presented with a fundraising cheque from a group of local gardai.

Last Tuesday Cahir Day Care Centre’s management, staff and residents were in great form as they sat to enjoy their lunch. Earlier that morning Mass was said in the adjoining St. Mary’s church by Fr. Langford and Fr. Bobby Power to celebrate the ninth anniversary of the official opening of the very popular and vital facility for older residents in Cahir. The celebrations continued as just before lunch two of our local Gardai presented a cheque to Day Care Centre Chairperson, Peggy O’Brien and Manager, Lil Davis. The cheque for €1,019 was the proceeds of an unusual fundraiser completed by three Cahir Gardai. Denis Stack, Lorraine Costello and Jennifer Gough climbed Croagh Patrick in March. Two gardai from Cashel also completed the cold and difficult climb and they were Gardai Pamela Dunne and Chris Coen.

Centre Manager, Lil Davis commended and thanked the Garda for their fundraising efforts and their continued support of the Day Care Centre. She said that the funds raised will help ease the financial burden the Centre faces every year to continue to give this support to our much loved older residents. “We had a great day,” Lil told The Nationalist, “We were absolutely thrilled with the gardai.”

More than 20 people attend the centre daily. As the centre only receives one-third of their funding from the HSE fundraising is essential. Community support for a recent church gate collection was “phenomenal” Lil said. The Centre provides not only lovely home cooked meals, but entertainment, warmth and good company to all older people who come through the doors to visit and spend time there. There is an emphasis on having fun, with arts and crafts, games and live music every day.

Lil told The Nationalist that the Centre has helped to improve the lives of so many people in its nine years because there are things they pick up on that nobody knows about.