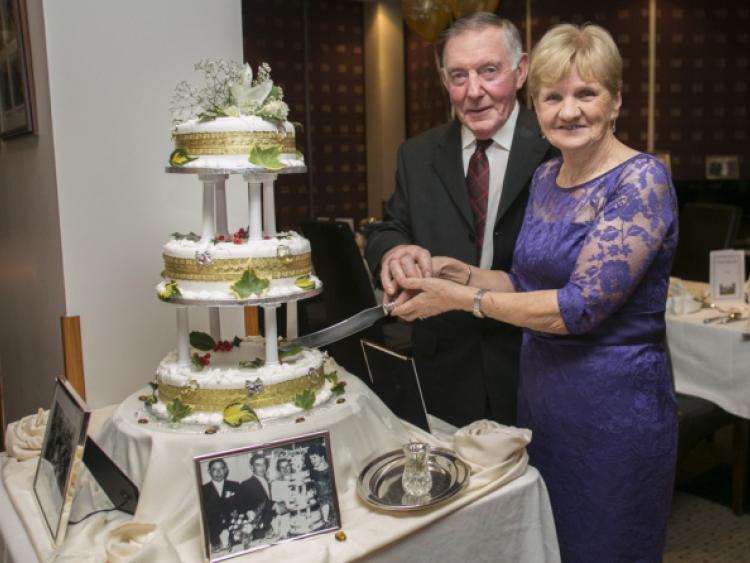 October 30, 1963, was one of the happiest days in the lives of a South Tipperary couple when newly weds Michael and Mary Brett walked up the steps into Jack and Babs Nallens’ newly opened Hotel Minella in Clonmel.

October 30, 1963, was one of the happiest days in the lives of a South Tipperary couple when newly weds Michael and Mary Brett walked up the steps into Jack and Babs Nallens’ newly opened Hotel Minella in Clonmel.

Fifty years later the happily married couple from Mullinahone returned to the Clonmel hotel with 59 new guests, including many family and friends, to celebrate their Golden Wedding Anniversary, which was marked last week.

Michael and Mary (nee Foran) were accompanied by their five children, fourteen grandchildren, and Mary’s six sisters who had a most enjoyable and entertaining evening on Sunday, October 27.

To mark the very special occasion Hotel Minella presented Michael and Margaret with a replica of their original three tier wedding cake, recreated by the Minella’s Pastry Chef, Steffan.

It brought back lots of lovely memories for the couple .

Mary and Michael, who was originally from Windgap, were married in the little church in Mary’s home parish of Clonea Power on October 30, 1963. They settled down and raised their family together in Mullinahone after their marriage.

There were happy memories recalled by many of those who attended the anniversary party. Sixteen of the anniversary party guests were present on the wedding day - including Mary’s six sisters: Margaret, who was her bridesmaid, Gily, Joan and her husband Michael Curran, Teresa and her husband Michael Barron, Rena and Carmel. Mary’s brother Padraig Foran with his wife Joan were also there.

From the Brett side of the family at the anniversary party were Michael’s sister Josie O’Sullivan.

Also at the wedding and the anniversary were Michael’s sister in law Aileen Brett, nephews Jimmy and James Brett and nieces Breda Phelan and Mary B Guinan, just children at the time of the wedding.

The couple’s children Gerry, Sean, Marie, Colette and Angela were part of the anniversary celebrations along with their husbands, wives and children, the Brett’s 14 grandchildren.