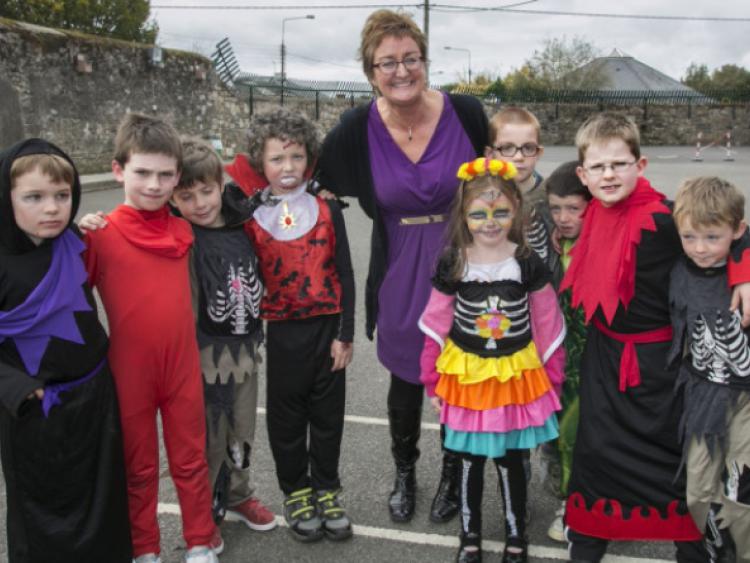 When the pupils and

When the pupils and

teachers of Gaelscoil Chluain Meala return to school after the mid term a familiar face will be missing.

Treasa Nic Dhiarmada, the principal since the school opened its doors just over 20 years ago, retired last Friday.

She taught in schools in Dublin and Clonmel before her appointment as the first principal and one of two teachers (Cait ni Chonbhui was the other) in Clonmel’s all-Irish Primary school when it opened in the former County Council building in Irishtown in September 1994 with 45 pupils. Today it has 11 teachers and 213 pupils.

“The time flew. I loved every minute of my time there and looked forward to going to work every day”, said Treasa.

Her teaching career began at the Sisters of Charity school Scoil Plas Mhuire in Dorset Street, Dublin, where she spent two years before returning to her home town to take up a post at the newly-established St. Oliver’s school in 1982. She taught for twelve years there under the leadership of principal Sean Nyhan.

When the town’s Gaelscoil was opened Treasa, as a lover of her native language, jumped at the opportunity to take over at the helm.

“I had to work hard at my own Gaeilge. I’m very conscious of encouraging people to speak Irish and incorporating the cupla focail into their everyday conversations.

Everybody who comes into the school comments on its atmosphere. The teachers and pupils are all on first name terms and that creates a relaxed atmosphere, but at the same time the work gets done in the classroom”.

When Treasa bumps into past pupils they always speak to her in Irish and it’s also a source of pride that many former pupils went on to study Irish as part of their Third Level courses.

The daughter of the late Brendan and Florrie McDermott, Treasa is married to Tommy Coleman - who she says has been “an unbelieveable support” during her time as Gaelscoil principal - and the couple have two children, Sean and Brid.

As of yet she has no great plans for her retirement and says she’ll take a rest for a couple of months and indulge herself in her many hobbies which include music, gardening, cooking and yoga, as well as catching up with people.

Her successor will be appointed next month and Treasa is confident the school will continue to go from strength to strength.

“I had a wonderful experience with the parents, who were so kind and supportive, and I can’t praise the staff highly enough.

It’s been a fantastic 20 years. The only difficulty has been the building and that is beyond our control.

Hopefully the building will soon reflect the quality of the school and the work that’s done there”.