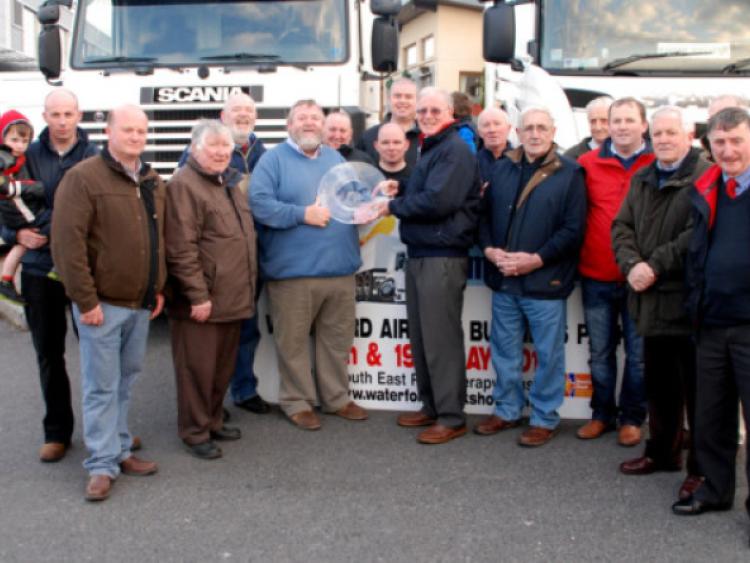 A charity that provides free transport to South Tipperary cancer patients undergoing radiotherapy treatment will be the fund-raising beneficiary of a major truck and motor show in Waterford on Saturday and Sunday, May 18 and 19.

The two-day Waterford Truck & Motor Show at Waterford Airport Business Park is in aid of the South East Radiotherapy Trust, which has been transporting cancer patients from throughout the region who require radiotherapy to the treatment units at Waterford’s Whitfield Clinic and Cork University Hospital since 2005.

One of the charity’s eight seven-seater vehicles transports an average of five cancer patients from South Tipperary to the UPMC Cancer Centre at Whitfield every week for radiotherapy treatment.

If more South Tipperary patients require transport at a given time a second SERT vehicle is made available. SERT has a team of volunteers in South Tipperary who drive the cancer patients to Waterford

SERT Chairman Gordon Watson, who is Waterford Regional Hospital’s former Director of Cancer Services, said the transport service is available to all South East cancer patients undergoing radiotherapy in Whitfield and CUH and is free of charge thanks to the fund-raising events organised around the region.

The Waterford Truck & Motor Show, which will boast a display of more than 350 trucks, will be SERT’s biggest fund-raising effort this year and Mr Watson urged the people of South Tipperary to pay it a visit.

“We would love it you came along and supported this event because the service we provide is great for the cancer patients in your area. As well as being a great help financially to them it’s also a means by which patients can develop a camaraderie among themselves as they are travelling together sometimes for as long as five to seven weeks. They learn from one another and we find that is a huge benefit to patients,” he said.

The Truck & Motor Show, which is being sponsored by Beat FM, the Irish Road Hauliers Association and Mark Lonergan Transport, is expected to attract thousands of visitors from throughout the region on May 18 and 19.

It will be an event for all the family as well as motoring enthusiasts.

Sponsor and organiser Mark Lonergan said more than 350 trucks have been confirmed for the show, which will include displays of classic, vintage and working trucks.

There will also be displays of vintage and veteran cars, vintage and classic motorbikes and vintage tractors on the 32 acres tarmac and gravel business park site.

Mr Lonergan said there will be plenty of entertainment and attractions for children and families throughout the show grounds including a children’s play area with bouncy castles, amusements, face painting, a story time session from a children’s book author.

Fifteen bands will play live at the show ranging from the Portlaw Pipe Band and Waterford Brass Band to local rock and pop groups.

Other highlights will be an extensive indoor display of model vehicles, the Discover Waterford hot air balloon that will be at the show on the Sunday and a dog show.

Mr Lonergan joined Gordon Watson in appealing to the people of South Tipperary to visit the show and support the work of the South East Radiotherapy Trust.

Entry to the show costs €6 for adults and entry is free for children under the age of 12. A two day pass costs €10.