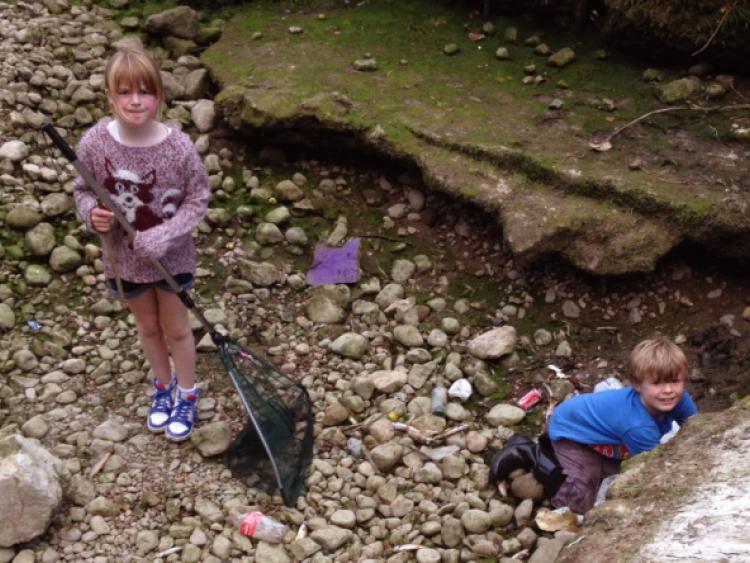 In contrast to last year’s serious flooding in August, the Clashawley river has dried up this week causing upset to many locals, young and old, many who have tried to make vain efforts to rescue the dying fish from the few remaining ponds of water on the riverbed.

In contrast to last year’s serious flooding in August, the Clashawley river has dried up this week causing upset to many locals, young and old, many who have tried to make vain efforts to rescue the dying fish from the few remaining ponds of water on the riverbed.

The fluctuating state of the Clashawley river has been the subject of local conversation for many years. Some concerned locals have suggested that the river is being occasionally diverted up country causing the drought in Fethard.

Mr Frank O’Donoghue, Inland Fisheries Ireland, Clonmel, said they were notified on Monday morning and quickly visited the site to assess the situation. The rescue operation on Monday saved over 200 trout, 30 salmon parr along with many crayfish and eels by moving them downstream. Salmon are known as parr once they are over a year old when they continue to stay in freshwater for between one and four years, feeding on small insects and growing larger.

The rescue will be on-going until all the remaining fish in danger are moved. Mr O’Donoghue explained that the situation may have occurred because Fethard is on a porous limestone bedrock area and that the ground water levels have dropped due to the lack of rain and surface water over the past few months.

While researching old documents on the Clashawley, we came across one from 1905 that refers to some water streams, that formerly flowed towards Laffansbridge and then on to the Clashawley in Fethard, were diverted north west to the river Suir. It was claimed that as a result of the diversion that waters were seen impounded 4 to 5 feet deep on the fields around Coolmoyne Cross. It was also mentioned that formerly, there were four mills on this stream operated by waterpower and now there was no constant supply of water for that power. The Clashawley was also quite a good trout stream and it was pitiful to see fish dying when the river commenced to dry up. During very early summer volunteers assembled to take fish out in buckets and bring them further downstream where springs kept the flow alive.

Today, over 108 years later, things don’t appear to have changed much!