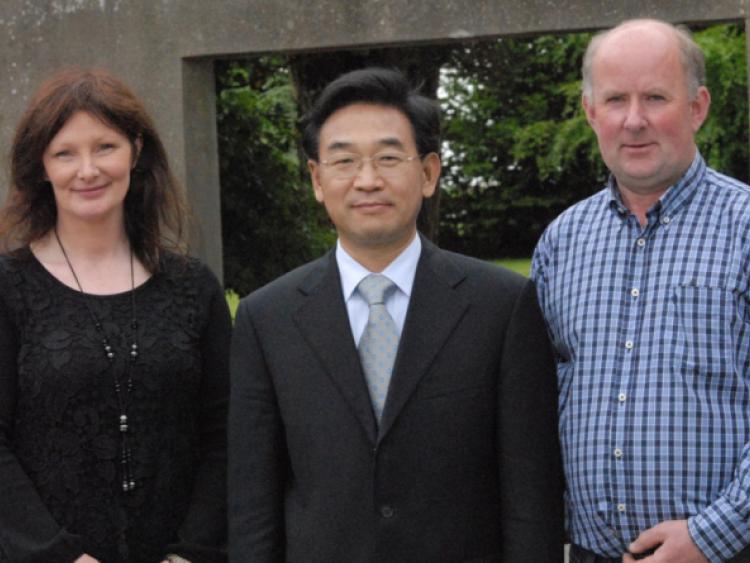 The Chinese Vice Minister for Agriculture recently paid a visit to a Tipperary Farm as part of his visit to Ireland to learn about milk production.

The Chinese Vice Minister for Agriculture recently paid a visit to a Tipperary Farm as part of his visit to Ireland to learn about milk production.

They have 170 spring calving Holstein Friesian cows and plan to increase by 50 cows after 2015. Their dairy, beef and tillage farm is at Cooleeney near Moyne, Thurles.

Cows are on target to produce 7,000 litres this season from grass, home grown cereals, fodder beet (purchased) and a TMR diet (includes apple pomice from Bulmers, beet pulp, straw etc) using a Keenan Mech fiber™ 360 model and the PACE system. Butterfat is currently at 3.8% and milk protein at 3.46%. Stocking rate is at 2.5 livestock units/Ha and annual milk solids are at 1434 kgs/Ha. Concentrates fed are at 1.08 Tonne/cow.

Since Keenan first introduced its technology at a major Beijing Dairy Symposium in 2009, Chinese Agri-experts such as Professor Wang Jiaqi, Deputy Director of the Chinese Academy of Agricultural Science (CAAS) see this technology as encouraging their growth strategy for the dairy sector and rural environment.

At a recent meeting between Professor Wang, Gerard Keenan and vice President of the Chinese Academy of Engineering, XU Rigan, Professor Wang said Keenan’s integrated nutrition technology as “being the best in the world, a revolution of thinking, a systematic approach to nutrition and feeding that can truly deliver feed efficiency results to China”. The Chinese plan to increase milk production by 25% to 50 million tonnes in 2020.

The Keenan strategy allows farmers to optimise existing resources before getting bigger.