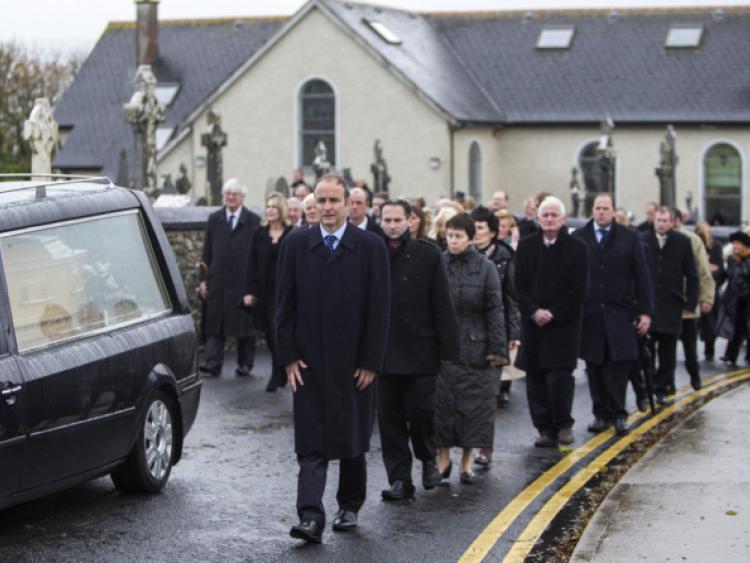 A community, proud of his political achievements and enhanced through his dedication to serve, bade farewell to the late Noel Davern as the Fianna Fail stalwart was laid to rest.

A community, proud of his political achievements and enhanced through his dedication to serve, bade farewell to the late Noel Davern as the Fianna Fail stalwart was laid to rest.

A congregation, in tears as  a poignant rendition of  ‘The Galtee Mountain Boy’,  a song close to the heart of Noel Davern as it relates  the exploits of men who  fought for their liberty beside his own family members, paid their respects in Powerstown Church on Wednesday last week.

The remains of the former MEP, TD, Junior Minister for Agriculture and Minister for Education was carried from the packed church to the strains of “Tipperary Hills For Me” and in the adjoining cemetery, his former ministerial colleague Michael Smith delivered the graveside oration.

The respect in which he was held by the people and Noel Davern’s great sense of community was reflected in a ceremony that celebrated Noel’s illustrious and colourful political career, his devotion to his family and his determination to serve the people that elected him.

TDs from all over the country attended the mass including Niall Blaney of Donegal. Niall, his father Harry and uncle Neil all served as a TD with Noel Davern who enjoyed a special relationship with the Blaney family throughout his political career.

Fr. Peter Ahearn, who celebrated the funeral mass, said the life of Noel Davern was “a life of service,”.

Life is at its brightest and best when lived in the service of others and Noel’s life shone out as a person of dedicated service all through his life,”.

Fr. Ahearn recalled him as the friendly neighbour, the obliging parish community man and first and foremast as the family man.

He was a man of high office, who never assumed airs and graces and remained “down to earth, a man of the people” throughout his career despite his political achievements.

He highlighted his contribution to the development of schools in Powerstown and Lisronagh and the tremendous facilities at Monroe which were the envy of communities all over the country.

He said nobody could measure the help he gave people or the good he did during his life but that the massive crowds that attended his obsequies were testament to the good he did.

“Noel shared his life with family, friends and the community. Service is love made visible among us” he said.

Before Noel’s remains were removed for burial, his son Don paid tribute.

He said his father would be remembered by his family for his love and generosity and  by everybody he touched as a jovial man, his wit, charm and the occasional abusive greeting.

Don said loyalty was very important to his father and at the heart of his relationships with family, friends, the party and constituents. He was a politician who believed he had a contract with the people who elected him and he gave a voice to those who could not speak for themselves and had a clear code of what was right and wrong.

He relied on the same  canvass teams, the same kitchen cabinet and was a walking database of Tipperary and he knew what was  going on in every part of  Tipperary.