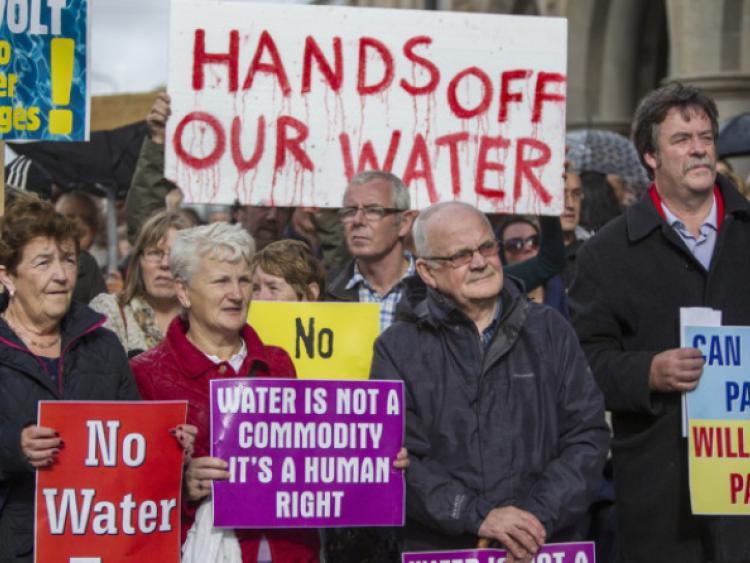 An estimated 1,500 people marched through Clonmel town centre on Saturday to protest against the introduction of water charges.

An estimated 1,500 people marched through Clonmel town centre on Saturday to protest against the introduction of water charges.

Protesters waving an array of placards chanted “No Way, We Won’t Pay” and “From the rivers to the sea, Irish water will be free” on the demonstration that left the Main Guard at 12 noon.

The march proceeded down the quay to Irishtown, through the West Gate and down O’Connell Street before finishing back at the Main Guard.

The demonstation took place just days after meters installers for Irish Water arrived in Clonmel housing estates. Residents from several of these estates such as Dromard, Ard Aoibhinn and Droimeala, who objected to the meters being installed outside their homes, were among the marchers.

In his rally address, Independent TD Seamus Healy (WUAG) urged residents in all areas of Clonmel to follow their example and force them to abandon the installation of meters in Clonmel.

“This campaign is based on the straight forward principle that water is a human right not a commodity and we want to abolish water charges,” he declared.

Protest organiser Donal Gilfoyle of the Clonmel Says No group, said the march was organised in response to the anger in communities against this draconian “double tax” and the privatisation of their water supply. Their other key concerns were the quality of water and the massive amount of limescale in their water. “People are refusing to pay twice for a poor service,” he said.

Ann Condon of the Clonmel Against Water Charges Campaign said they were delighted with the turnout to the protest.

“Up to now people have been angry but a bit complacent. I think this issue has pushed them over the edge,” she said.

The Clonmel march was one of four anti-water charges protests that took place around the country last Saturday.

The other protests were in Cork, Clare and Dun Laoghaire.