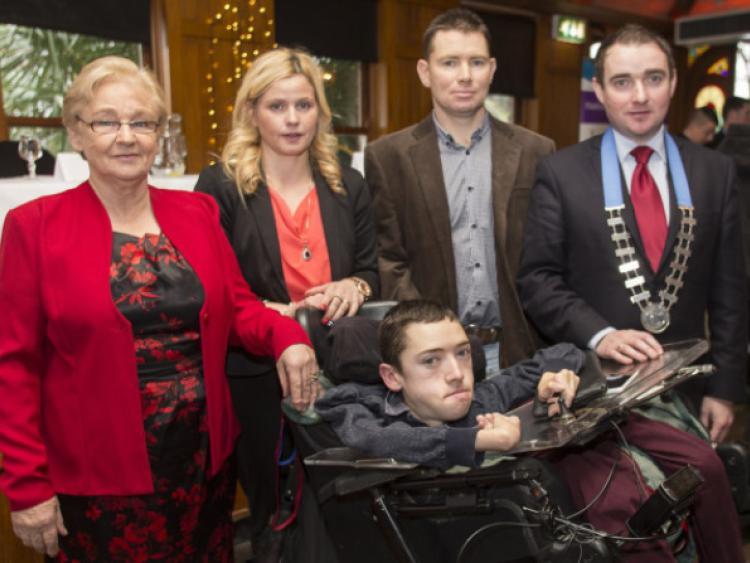 Area Manager, Kitty Galvin Hennessy initiated the ceremony with a very warm welcome to all attending before handing over to compere Pat Fitzgerald, a current Computer & Office Skills student at the NLN.

After the initial address by Kitty Galvin Hennessy, Mayor Lonergan gave a brief but inspiring speech about National Learning Network and the prospects for its students. Ursula Collins NLN Reg Director and Marius Cassidy ETB and other guests also paid tribute to the students for their outstanding achievements both academic and vocational while thanking the staff of the NLN for their hard work and dedication.

Special guest Dolores Fahey, County Civil Defence Officer spoke of National Learning Network in glowing terms. She spoke of her long standing connection with NLN, and the fact that three of recent students have become fully fledged members of the Civil Defence. She spoke of her daughter’s transition year work experience at the NLN. She imparted her daughter’s comments on her experience of the NLN: “it was friendly and cool, the people at the NLN were treated as individuals, it was really a great learning environment”. Ms Fahey expressed her desire to see the NLN model of education introduced into mainstream education in Ireland.

The Mayor returned to the stage to present FETAC and ECDL National Awards to students attending the ceremony. Students received their certs from the Mayor while shaking his hand and then posed for photographs. One of the highlights of the certificate ceremony was the handing over an ECDL Expert Certificate to Stephen Kirwan Ryan. Stephen is the first student at National Learning Network to receive this award

Two former NLN students, Gavin O’Halloran and Philip Sheehan were introduced by MC, Pat Fitzgerald to give a short account of their experience at the NLN. They described how they gained huge confidence from the experience, and also the skills, academic and work related which helped them gain employment in Hanley Controls Clonmel and Marks & Spencer Clonmel respectively.

A very special award, the Roseville Community Award, was spoken about by NLN Instructor Gerry Burke, who outlined the significance of this unique award. The award is given to the learner who it is felt made the greatest contribution to the Roseville community over the past year.

Gerry called on special guest Delores Fahey to reveal the Roseville Community Award recipient who was the hard working and popular student Stephen Halley. He graciously accepted the award and thanked the NLN for giving him the opportunity to engage in meaningful education again after missing out on the opportunity earlier in his life.

Before presenting the Employers Positive to Disability in Employment Awards, National Learning Network Instructor Rita McCormack- John spoke about National Learning Network “Training with the NLN isn’t just about academic development, we encourage students to engage in other activities. This holistic approach to education aims to make the student a more rounded individual” She then spoke in recognition of all employers who work with the students and of their continuous support. Awards were the presented to Supervalu Clonmel, Carrick-on-Suir, Callen, Cashel, Cahir and Tipperary Town.

The ceremony was closed by the NLN’s Kitty Galvin Hennessy, which was followed by group photos with photographer John Kelly and refreshments.

Well done to all involved.