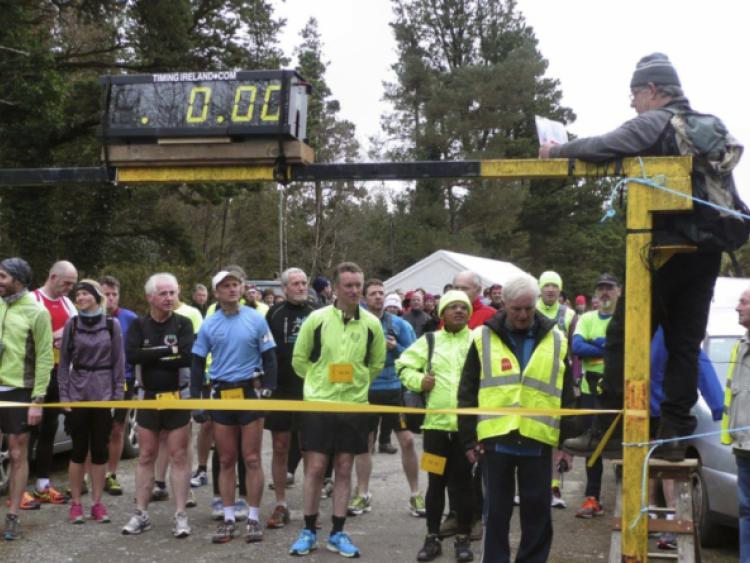 In perfect weather conditions, the club’s annual Palm Sunday Marathon was a resounding success with over ninety people from all over the country and of all ages taking part in this 42km walk across the Slievenamuk Ridge.

In perfect weather conditions, the club’s annual Palm Sunday Marathon was a resounding success with over ninety people from all over the country and of all ages taking part in this 42km walk across the Slievenamuk Ridge.

Starting from Rock an Thorabh car park, the route took them west to Moor Abbey and then east to Bansha Woods, ending at the start point at Rock an Thorabh.

The marathon was meticulously planned by Rody Tierney and fellow club members and the event was officially opened by club president, Danny Bailey.

The course enabled all the walkers to go at their own pace, whether running or walking and this year a sizable group choose the former with the first runner covering the entire route in three hours forty six minutes, with second and third not far behind.

This was a great achievement but the majority of marathon participants walked including Chairman of the club Owen.

The participants had the option of doing a half marathon and as well as meeting their own individual challenges, most were out to enjoy the beauty of the emerging spring in wood and pastureland.

The Galtee Walking club wish to thank all who took part and congratulate them on their achievements .

A special word of praise must go to a group of people who played a crucial role on the day, the club members who manned the base camp at the Rock from early morning and those who kept the check points and refreshments east and west.

Of course without the co-operation of the local farmers and the work of Caoillte in clearing storm damage, this event could not have taken place.

An extended thank you to Helen Morrissey, the civil defence team, Denny who procured the marathon clock and the radio backup group.

But the laurels must go to Rody, who not only completed his first full marathon but together with his comrades gave their all to provide a very special day for everyone.