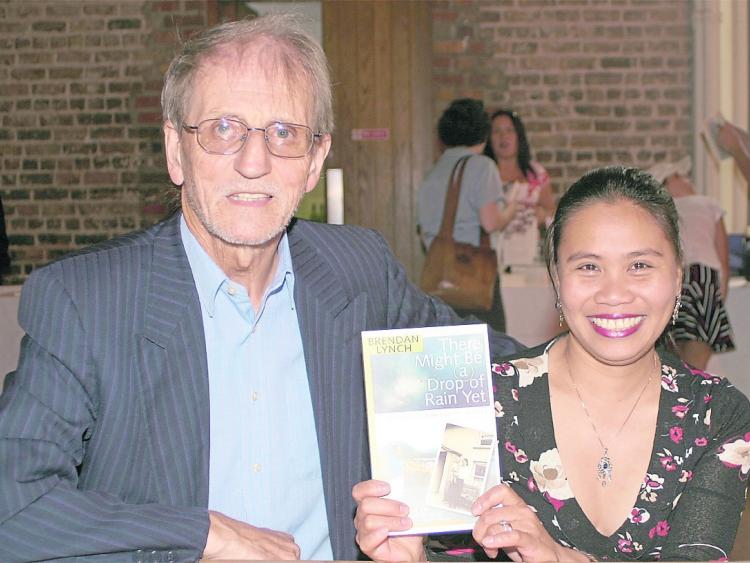 Toomevara author Brendan Lynch with his wife, Margie, at the launch of his memoir of growing up in Toomevara, There Might Be a Drop of Rain Yet

Brendan Lynch was brought up in Toomevara, where his father Patrick was a Garda sergeant, and his mother Siobhan a teacher.

A former racing cyclist, he won many events and represented Tipperary in the late 1950s. Imprisoned in London for his pacifist anti-bomb activities, he has written nine books.

His next is a novella, based on shell-shocked WW1 veteran Gunner Dan Doherty, who lived in his village.

Their house was beside the bridge, in the centre of the village of three streets and fourteen shops, six of which were pubs.
He enjoyed sitting on the front garden seat.

Flowers danced inside the white railings, the river made music as it flowed out from under the bridge.

He watched the locals go to and fro, while he awaited the distant hum of the green bus that went all the way from Limerick to Dublin.

“Here’s Billy Delaney with the cows for milking!” Even on wet days, he could see everything from their glass porch. Postman Jim O’Rourke chatting to villagers on his round, farmers going into Matt O’Meara next door for foodstuffs. Big Jim “Boss” O’Meara on the other side of the bridge coming out to check the weather. Lonely asses and carts with milk churns waiting outside Harty’s and French Shea’s pubs.

“When they fly low, it’s a sign of rain. When they play high in the sky, the sun will shine.” His father and he watched the fork-tailed swallows building their upside-down nests under Looby’s eaves. Their chirps filled the air each evening, as they dived and played between the houses. Birds which had flown all the way from Africa!

Summer brought the most exciting sounds.

The thump of Perry’s Ale barrels and the clinking of Dwans’ lemonade bottles outside the pubs.

The rattle on the slate footpath of his cycle wheel bowlie and the whine of the saws from Boland’s mill. The village also rang with the tapping of the Tinker Quinns, as they repaired and soldered saucepans, frying pans and kettles.

His favourite melody was the clang of sledge-hammers against the metal pegs which anchored the travelling show tents.

On the Sundays of the big hurling and football matches, Dick Casey propped his front window open with a Peggy’s Leg jar, so that those outside could hear Micheál O’Hehir’s commentary.

“Come on Hough and Shanahan,” locals shouted for Toomevara’s own county players.

The sun melted the main road tar the day that Michael called on Big Jim O’Meara. The publican showed the commentator all his tricks, including one he himself longed to learn, how to turn a penny into a florin. Jim asked his visitor to choose a card. He flung the deck up at the bar ceiling where one card remained stuck.

“Would that be yours, Michael?”

“You can cycle to the big match today,” his father told him one Sunday morning. They loaded their bikes with a rug, scones, mugs and a flask of tea. “Greyhound” Stephen Hackett and ballad singer Billy Walsh set off with them to Moneygall, where Toomevara was playing the local team.

“Wait for me!” His shorter legs had to pedal much faster to keep up with the adults on the four-miles trip. By the time they reached the hurling field, they were all singing Billy’s new song:

Hay and oats for the Moneygall goats,

Eggs and rashers for the Toomevara dashers.

The Emergency brought rare summer-night adventure, when his brother and himself joined the villagers in the harvesting.

Tilly lamps swayed on the horsedrawn reaper and binder they followed in the fields above Boland’s mill.

Teams of villagers cut the sheaves and filled the bags with flowing wheat. Men dodged the threshing machine belts and used words he had never heard at home. “Nothing like an emergency to get folk working together,” the old WW1 veteran, the Gunner, observed.

“It sure beats people fighting and killing each other.”

At the end of summer, the Heaneys arrived with their latest wire puzzles. “Better than any book, these’ll keep you going all winter!”

A whole year had flown and he was back to school again. Autumn brought the compensations of hazelnuts, Halloween barmbrack and snap-apple.

As he stripped the slim silver trees in Loughisle Wood, he dreamed of finding the rapparee Galloping Hogan’s buried treasure. But he was as unsuccessful as he was at Blean, where he had sought the outline of a crock of gold in the tree-rimmed fairy rath.

One morning his brother Colm shouted: “Look out the window; it’s like a Christmas card.”

He opened the curtain. Toomevara and all the countryside as far as Keeper mountain was covered entirely by snow. The roads, every roof, windowsill, garden and field. Even Casey’s oily petrol pump wore a dazzling coat. Everything was so clean and still.

The only sound came from the river flowing by the snow-wrapped flowerbeds and the postman, who made funny crunching noises as he walked.

Every Christmas, the children gathered around Tierney’s window to see the new toys. For most, their only hope was to make some pennies on St Stephen’s Day. One of the village characters was the Gunner, who had been shellshocked in the Great War.

Many villagers who had cheered him going off to war now looked down on him because he had been in the British army.
On St Stephen’s Day, the Gunner dressed in a black mask and red cloak, and leaped through the streets waving a long staff. Known for his generosity when he had money, many children followed him.

He treated them to lemonade in Harty’s but they ran away from him afterwards, as he staggered from pub to pub. “You can’t bate the Christmas, better than armistice day in Wipers.”

A widow from outside the village was also fond of a drink. Her ass slipped on the ice outside their house. It took her longer to get up than the ass. His mother ran out when she heard the commotion. “Come in now and have a cup of tea.”

Their visitor tripped over her chair. His mother pretended not to notice. “We’ve never seen a winter like it, thank God. Sure ’tis amazing that any poor animal can stand up at all.”