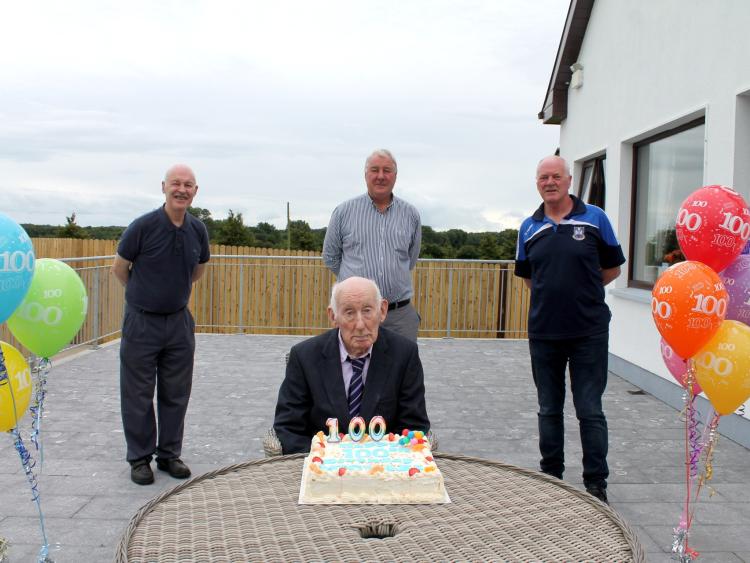 Michael Ryan and his nephews, Ger, PJ and Sean (pictured left to right)

While many celebrations have been put on hold due to the Covid-19 pandemic, on August 1, one celebration did go ahead and that was the 100th birthday party for Moyne native Michael Ryan.

Michael is now a resident for the past eight years of the Sacred Heart Nursing Home in Crosspatrick, just seven miles away from his birthplace in Manseltown, Moyne in 1920.

He is the last survivor of a family of seven, born to his parents John and Winifred Ryan, and the third of his family to reside at the Sacred Heart Nursing Home with his brothers John and Matty previously spending their retirement years there.

Michael attended the National School in Kylemakill, which is no longer a school, but was relatively new when Michael went there in 1925 having been built in 1915. From there he went to Thurles CBS Secondary School before heading to Dublin in 1940 to commence an apprenticeship in the bar business.

He commenced his life in Dublin which stretched over 50 years in Donnycarney and went on to work in Inchicore and Parnell Street before moving to the well known Sheds Pub in Clontarf where he spent 31 years.

The village of Clontarf was originally known as The Sheds fishing village and the Sheds pub was constructed on the one street that leads to Clontarf Castle.

Originally licensed in 1845, its remained in the Connolly family since 1927 and the longevitity of this pub presents the social history of the area.

Michael lived in Fairview with his wife Ann who was originally from Wexford and sadly passed away 20 years ago. It was then that Michael decided to move back towards his native Tipperary.

He remembers his time in Dublin fondly with his frequent trips to Croke Park and his first All Ireland in 1945 when the John Maher led Tipperary defeated Kilkenny and of course being there for Tipperary's three in a row between 1949 and 1951.

However the wonderful thing about Michael at 100 years of age is his crystal clear memory.

He is as lucent discussing the great players of that era such as Tommy Doyle, Seamus Bannon and Jimmy Kennedy as he is today's heroes like Brendan Maher, Seamus Callinan or John McGrath.

He has a wonderful interest in sport be it hurling, football or soccer and avidly watches the action on TV together with being a great reader with an interest in current affairs and politics - all of which no doubt have contributed to his long life.

He considers Sacred Heart Nursing Home his home and says he has always felt one of the family there, and was not suprised therefore that they ensured his special day was a memorable one.

The legendary Jim Of The Mills was on hand to entertain with not alone his beautiful singing and music but with his array of stories.

Also in attendance were Michael's relations from Thurles and his nephews from Castletown.

It was a lovely day which all the other residents thoroughly enjoyed even in the days of social distancing restrictions as they all joined with Michael on the wonderful occasion of his 100th birthday.