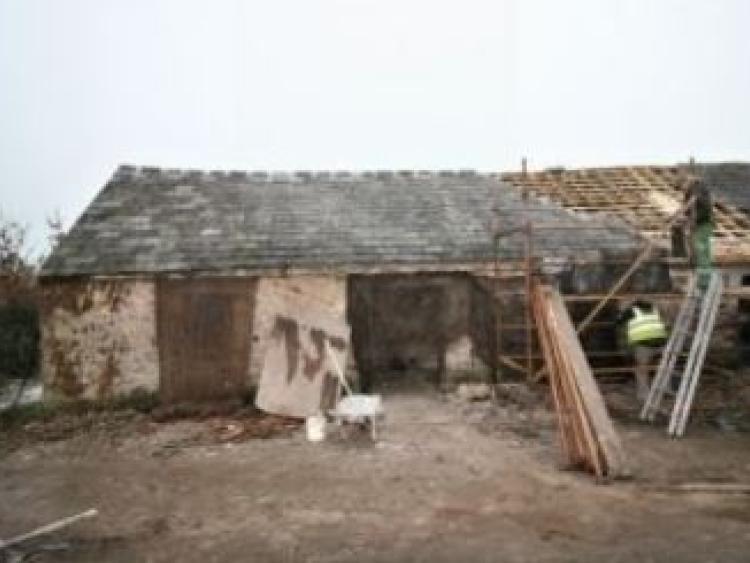 Living in a rural landscape I have noticed that new life is been breathed into many old farm buildings. These are being sensitively refurbished with restored slate roofs bringing their long-established role as shelters for animals and general farm storage back into use.

The pace of this development has really increased over the last few months. Time on our hands has encouraged us to rediscover our connection with rural architecture.

I was recently contacted by Aemon Hunter who supervises works on the Traditional Farm Building Grant Scheme that is funded by the Heritage Council in partnership with the Department of Agriculture, Food and Marine. His Dad William is renovating old stables on his farm and part of this project is to highlight the many merits of the scheme.

The farm is located in Ballylooby near Cahir and a stone’s throw from the River Thonoge, a tributary of the river Suir. The buildings being renovated date back at least a 150 years.

The principal objective of this scheme is to ensure that traditional farm buildings and other related structures that contribute to the character of the landscape, and are of significant heritage value, are conserved for active agricultural use.
The scheme benefits include rural employment, promotion of traditional building skills and an increased awareness of conservation and sustainability among farmers.

William is also a GLAS farmer. This stands for Green Low Carbon Agri-environmental Scheme and is one of a number of ways that farmers are encouraged to move towards a more sustainable future.

A derogation licence for the works was received from the National Parks and Wildlife Service (NPWS) and this highlights the importance of how we can incorporate good habitats for protected bat and wildlife species in our traditional buildings.

Aemon has also recorded some of the important architectural features of the stables. Part of the rough-cast render is still in perfect condition decades after it was applied. I remember applying this with my dad and uncles.

Burnt lime was used and this would fizz and heat up when water was added to it. Next, sand and pebbles were mixed with the lime and with a flick of the wrist, the render was thrown roughly onto the wall. Like all traditional skills, it takes years to perfect and looks easy when you are watching.

This was a finish made to last and at a time when we are aspiring to develop more sustainable buildings, there are important lessons to be learnt from the techniques of the past. On William’s shed, the same lime and sand has been used to plaster under the re-fixed slates helping to secure them in place and avoid the use of modern woven roofing felt which bats can become entangled in.

My dad was a great recycler and the yard at home was full of old slates. These were carefully stripped off the house we were repairing and the slates from churches were massive and often a couple of inches thick.

These slates became less popular when cheaper cement tiles became more widely available but with patience and care, people who were repairing old buildings, like William, can use reclaimed natural slate to refurbish these beautiful structures that can provide useful space for many more years to come.

Aemon has done some research which has revealed some of the rich social heritage of the farm at Ballylooby. According to Griffith’s Valuation of 1863, the owners at that time were ancestors of the Dáil minister and one-time Director of the Abbey Theatre, Ernest Blythe, who apparently used to visit his family at Ballylooby often.

It is also important to reduce the impact on wildlife when carrying out works on old farm buildings, as if precautions are not taken, wildlife could be disturbed. Bats, as well as birds like barn owls and swallows often nest in old buildings like this stable, which would have originally housed draught horses. These massive animals were the tractors of their time.

They pulled the heavy ploughs or carts full of hay. Swallows nesting in the rafters for generations feasted on the flies around the horses and their chicks would have been kept warm from the horse’s body heat on cool summer evenings.

Mark Donnelly, an environmental consultant based in Cork carried out a wildlife survey on the site in August. Two species of bats were recorded, the Common pipistrelle and some brown long eared bats. All Irish bat species are protected under the Wildlife Act (1976) and Wildlife Amendment Act (2000).

Also, the EC Directive on the Conservation of Natural Habitats and of Wild Fauna and Flora (Habitats Directive 1992) seeks to protect rare species.

Bats were observed in and around the building and there are several recommended mitigation measures to protect these important creatures. Larch and oak were recommended to be used for any new rafters as these are naturally durable and don’t require timber preservative.

Poisons in some timber preservatives and woodworm treatments can have a long-term effect on bats, as their skin is very sensitive and quickly absorbs toxins. The timber was also left rough-sawn as this allows bats to grip on to the fibres of the wood.

Bats feed in the surrounding landscape along the hedgerows and river where they catch up to 2500 insects each night. They have a long life but low reproductive rate. It takes a few years to reach sexual maturity and they have one pup per year.
Swallows were also found nesting in the building.

While the Irish population is secure they are amber listed and this means that they are vulnerable going forward. A few openings will be left to allow access for the swallows and this will also let brown long eared bats in to roost.

Old buildings need to breathe and they need plenty of ventilation – a lesson I learnt this lesson when doing up my house that is over a 100 years old.

Barn Owls are protected and Red listed in Ireland because their breeding population has fallen by at least 70 percent.

While no evidence was found of barn owls, Tipperary is still a stronghold for these magnificent native birds. William intends erecting a barn owl box in his old farm buildings to encourage them to come back to the area.