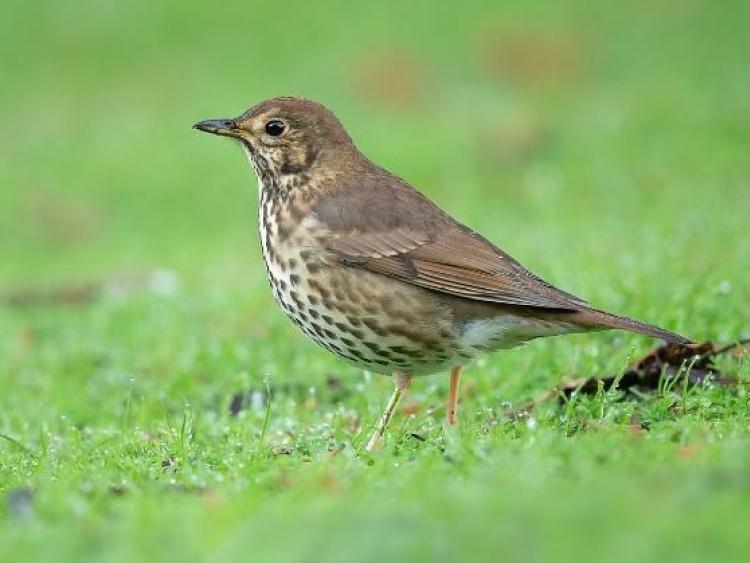 The song thrush has finally burst back into song after a few days of rusty attempts. For now he is perched across the road on a tall conifer tree. Just before I get up as dawn is breaking I open my window for a few minutes. I wait and slowly the song of the thrush welcomes me into the new day.

Of course he is not singing for me but to attract a mate and proclaim to other thrushes that he has established his territory in my garden. After a morning of singing we often spot him in the garden searching for worms. When the snow was on the ground he hunted under an old table that we use for potting up plants. The ground here was not frozen.

Another welcome surprise as I opened the sitting room curtains was the first of the crocus. These ones are yellow and I planted them in a window box last year. I like having flowers around the front of the house, as they nicely frame a positive mood for the day ahead.

I put out some bird seed and hungry flocks of chaffinches and house sparrows soon appeared. They were joined by a male pied wagtail, who had a jet black back. He was very aggressive towards a much smaller and duller wagtail. He kept chasing away the youngster on his short fast legs.

Life was full of dramas indoors as my daughter woke up with a sore tooth. Luckily the local clinic was able to see us straight away. While we waited in the car a starling kept us entertained with his singing, while jackdaws were checking out the local chimney pots. Thankfully only her baby tooth had split, as the adult tooth pushed out. It was a painless extraction and after a few minutes we were on our way back home.

Another surprise waited on the roadside as we drove home. The first of the daffodils were in full bloom and although I was mad to stop and take a photo I wisely kept on going.

Later we went for a walk to de-stress. In a sheltered garden the buds of the magnolias were opening and later they will have magnificent flowers. I cheekily took a cutting and will grow one for my own garden.

We met a recently moved in neighbour and this was our first opportunity for a socially distanced chat. She is a keen gardener and vegetable grower and we could have talked for ages, till I got a not too subtle dig in the ribs form the kids and it was time to move on.

The birds who had been singing away went very quiet. A kestrel suddenly appeared in front of us and landed on top of the roadside electricity pole. I thought he would fly away as we approached but he didn’t move till we were just a few meters away. He then landed on the next pole and again ignored us till we got very close. This continued along the road and we were thrilled with our close encounter with such a magnificent bird of prey.

Finally he had enough and flew onto a pole in the nearby field. We could see and hear the little birds start to come back to life. He must have been really hungry to allow us to get so close or perhaps he is getting used to people. This road is used regularly by walkers and we have observed the kestrel here several times.

Kestrels are very easy to identify as they are the only bird that hovers. They will start off high and slowly drop down, before catching their prey. This is mainly mice and voles and this is a really important ecological service for farmers. They also have the unique ability to see in ultraviolet. This allows them to track the urine trails of mice.

Despite all their prowess as hunters only around one in ten hunts are successful and this is for experienced birds. Many young birds die of starvation in their first winter and hopefully my bird will beat those odds.

As we turned for home a large flock of starlings were moving between the fields as they searched for worms. They appeared to be unconcerned by the kestrel. When they are flying together it is very hard for predators to get an exact fix on one bird, so there is safety in numbers.

This of course does not apply to nesting. For the last week a single starling has been perched on the roof of my dad’s apartment and singing. When you are in his sitting room you can hear them rustling around in the vent. They have nested there for years and as starlings are fairly long lived it could be the same pair of perhaps their descendants.

My dad is always threatening to evict them but so far he has left them in peace.

The evenings are stretching towards six and I’m trying to make the most of the new light. Nature is also waking in the countryside, our parks and parks and it is an amazing time of the year so please head out and enjoy.