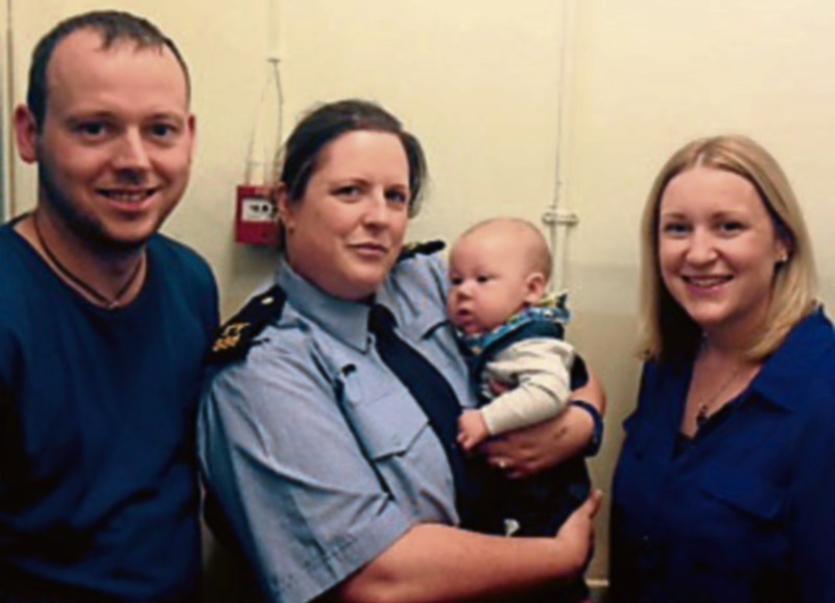 The parents of a 12 week-old boy born in an ambulance outside Carrick-on-Suir Garda Station late at night, returned to the scene of his dramatic birth last week to thank the gardai who helped them in their hour of need.

Jennifer Power from Ballyneale gave birth to her beautiful son Senan outside Carrick Garda Station in the early hours of Sunday, April 3.

She described the four gardai who came to her and her husband Jason's aid while they were waiting for the ambulance as their "knights in shining armour".

Jennifer and Jason brought little Senan back to Carrick-on-Suir Garda Station last Tuesday, June 21 to say thanks to Gdas. Sean Cuddy, Judy Davern, Ger Morrissey and Reserve Garda Brian Guidera for all the support and help they gave the couple that night.

Gda. Judy Davern was on duty at the Station when they called and met the thriving three month old boy. She played a key role in helping to calm and re-assure a frightened Jennifer while they waited for the paramedics.

"I just want to publicly acknowledge what the Gardai did for us. We are really grateful to them," said Jennifer. "I will forever be telling Senan about how he was born. We will always have that connection wih them. I feel the Gardai don't get enough public acknowledgement for the good they do."

Jennifer said she was also deeply grateful to the Ambulance Service paramedics who delivered Senan and brought both of them safely to Waterford University Hospital. She unfortunately doesn't know their names to thank them personally.

Senan was a sturdy 8lbs 5.5ozs in weight when he was born just minutes after the gardai and parademics managed to stretcher Jennifer from the backseat of her car into the ambulance.

His safe arrival into the world was all the more precious to Jennifer and Jason because in March last year they suffered the tragedy of a stillbirth. Their daughter Réaltín (meaning little star) was stillborn at six months. The couple have two other children Clodagh, aged 6, and Fionn, aged 4.

T he heartbreaking loss of Réaltín meant Jennifer was particularly anxious during her fourth pregnancy. When she went into labour in the car on the way to hospital that night, she recalled she was "petrified".

She told The Nationalist she woke up at 2.05am when her waters broke while she was in bed. After calling her sister to come mind Clodagh and Fionn, Jason got her into their car and began the journey to WUH.

Jason was on the phone to a midwife at the hospital and she told them to call an ambulance to meet the couple as it appeared they wouldn't be able to get to the hospital on time. When they contacted the ambulance, they were advised to pull in somewhere and wait for them.

"We were in Carrick-on-Suir and the GardaSstation came into my head because it's the one place everyone knows and it's right in the middle of the town,” Jennifer recalled. “I said to Jason to pull in there and he did and we were told on the phone the ambulance was on the way; don't panic.

"I was sitting in the front seat of the car and the baby's head was coming out. Jason was in an awful panic. He ran to the Garda Station and banged on the door. We didn't know if anyone would be there and were just lucky there was one garda and he answered the door."

It was Gda. Sean Cuddy, who immediately contacted his colleagues on patrol in the squad car. Gdas. Davern and Morrissey and Reserve Gda. Guidera rushed back to the Garda Station. They moved Jennifer into the back seat of the car and Gda. Davern sat in with Jennifer, who was in great pain from continuous contractions at this stage.

"Gda. Davern calmed me down and told me 'you are okay, I know what you are going through. You are fine you will get through this'. She just helped me to focus."

Jennifer said the ambulance arrived quickly after about 10 to 15 minutes. Luckily an ambulance crew had been relatively close by returning from Waterford to Tipperary when the call came in.

She recalled the huge relief she felt on seeing the paramedics arrive. She was unable to stand up so the gardai and paramedics stretchered her into the ambulance and baby Senan arrived a few minutes later. He was born 53 minutes after Jennifer's waters broke. She recalls Gda. Cuddy came into the ambulance to see the baby and joked he would be a garda when he grew up.

The ambulance crew brought Jennifer and baby Senan to Waterford University Hospital and she was soon sitting up in bed enjoying a well earned cup of tea and toast. "I was the talk of the ward," she laughed.

"I will never forget the circumstances of Senan's birth and I will never forget how good the Gardai were to me. They were my knights in shining armour. I am so grateful to them. It could have been another story. If they hadn't helped us, it might have ended in a bad way."

Jennifer believes they were very lucky Gda. Cuddy was present in the Garda Station when Jason knocked on the door and that the ambulance was not far from Carrick-on-Suir when they made the 999 call.

"If there had been no one there to help us, God knows what would have happened. We were just blessed the way everything worked out. I like to think my little girl (Réaltín) was looking down on us and maybe had something to do with it all."