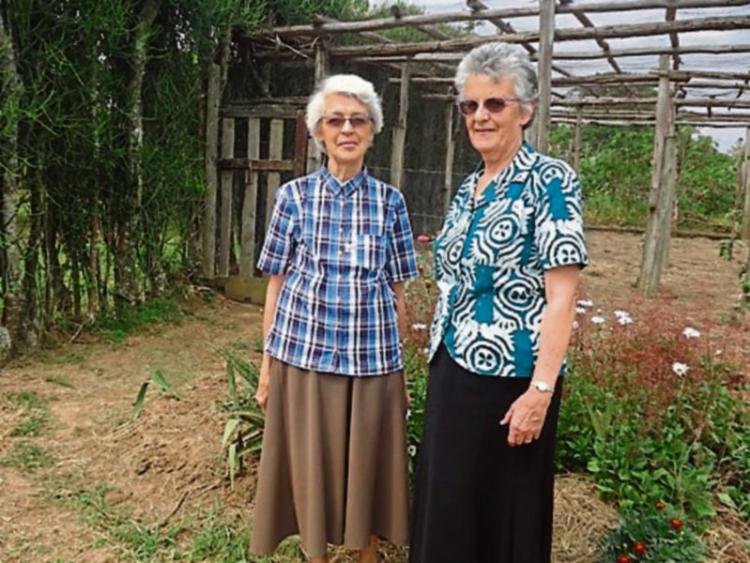 Having completed Clonlisk National School and Sacred Heart Convent School, sisters Eileen and Mona Maher joined the Sisters of the Daughters of Mary and Joseph Congregation, and went to Uganda in 1970 and 1972 respectively.

“We have both lived and worked there ever since, always being involved in education, both formally and informally, believing in the empowerment of women and girls as a means of uplifting the standards of people and alleviating poverty in family life,” says Sr. Mona.

“In 2010, as both of us were thinking that our time for retiring had come we were asked to assist in the administration of a new primary boarding school for girls. It has been a great privilege and challenge for us and now seven years on, the school is growing and developing very well, thanks to the people of Roscrea, Birr and the surrounding areas.”

Roscrea Comhaltas are holding a fundraising concert in aid of the children of Uganda on Sunday 12th February in Racket Hall Roscrea. This week and next week, we delve further into the school where they are now working.

The sisters' story begins in 1959, which “ was a great year for the Sisters of the Daughters of Mary and Joseph Congregation, when they opened a mission in Uganda, East Africa. Five Sisters left Europe for this work – 2 English, 1 Irish – Sr Bridgid Stokes, from Mullingar, 1 Swiss and I Trinidian,” writes Sr. Mona.

“They had been invited to begin a boarding secondary school for Catholic girls in a catchment area greater than the size of the whole of Ireland. It was a daunting work but within two years the first 16 girls were admitted. That same school continues today to grow and develop as one of the best schools in Uganda. It now has 1,300 boarding teenage girls - unthinkable for Ireland isn’t it? Uganda js a small country relative to its neighbours in East Africa. It has a population of nearly 40 million and continues to increase. According to international statistics it has the highest number of children under 14 years % wise in the whole world. This is a great asset in a developing country – there are always people available whenever work needs to be done. When a vehicle gets stuck in the mud in the wet season the men just surround it and lift it out! The average number of children per woman is estimated to be 7 - 8. However this high population puts a great stress on resources – land, education, health and results in a high unemployment of the youth.

“The land is being exploited and forests cut for firewood, both of which are adversely affecting the climate, resulting in reduced rainfall and newly created drought affected areas. The country is beautiful with many hills and valleys, lovely people and a lovely climate. The temperature is normally between 22 and 27 degrees . There are 2 dry and 2 wet seasons. During the dry season there is no rain for about 3 month and everywhere the grass and plants get burnt up. During the wet season the rain can be torrential and everywhere is green and with fast growing vegetation. (It can look like what Ireland experiences all the time). The soil is generally fertile and food is plentiful with fruits in abundance.

“In the 1980s Uganda was the first country in Africa to go public about HIV/AIDS. The epidemic reached 18% of the population. However through a very comprehensive programme in schools, on radio, in villages and in Churches the % is now as low as 6-7%. As a result of the epidemic the country has as many as 2 millions orphans. Many families are headed by children as young as 12 years, while many others live with grandparents. The Church, the missionaries give high priority to the care and welfare of these orphans. Many of these are very poor