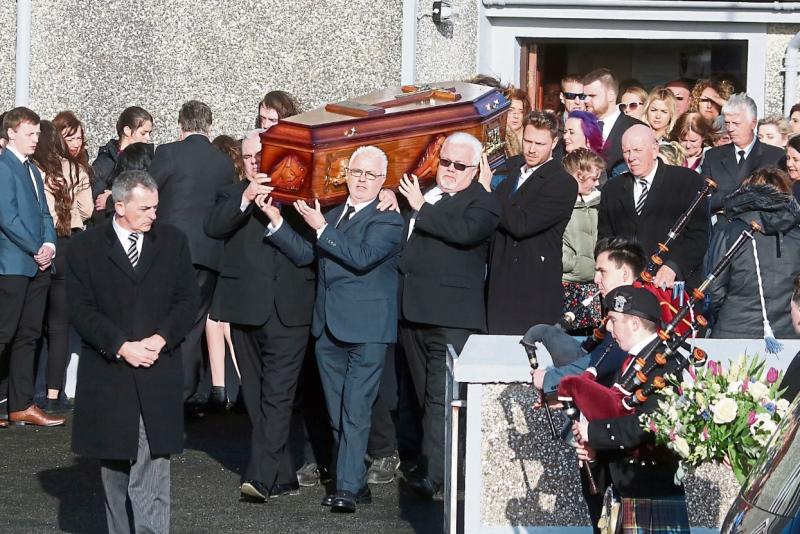 Dolores O'Riordans remains are carried from the church after her funeral Mass Picture: Michael Cowhey

Huge outpouring of sympathy as Dolores O'Riordans Funeral Mass celebrates her life and the contribution she made.

A CD recording of Dolores O'Riordan performing Ave Maria with Luciano Pavarotti as the entrance hymn  at the funeral of the Cranberries lead singing, was the perfect backdrop to an emotional celebration of her life in  Saint Ailbe’s Church, Ballybricken, Co Limerick this morning. 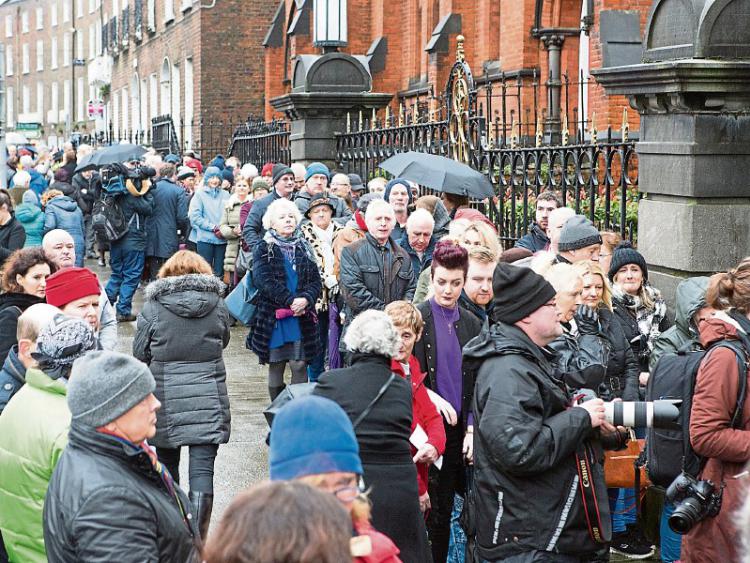 Hundreds of mourners queue to pay their final respects.

Two symbols from Dolores’ musical career, a guitar and a platinum disc award, were brought to the altar by her niece, Eileen, and a life-long friend, Teresa. Dolores’ nephew, Patrick, presented a picture of Our Lady of Dolours, after whom Dolores was named and the picture originally belonged to the great, great, great, grandmother of Dolores. Breffni, a life-long friend of Dolores brought up a poetry book.

The Homily preached by Canon McNamara is published in full. He said.

"This Irishman was very popular in the local community.  All looked forward to his performance on stage yearly.  He specialised in singing jovial songs.  But sadly he died suddenly.  Nobody could replace him.  He was terrified as he joined the queue facing the Divine Judge.  He felt he had done very little good in life.  As Christ flickered through the various Books of Life, he could hear clearly how those in front of him were doing.

“I was hungry and you gave me food” – Yes, in you go to heaven.  “I was in prison and you came to see me” – yes in you go.  Oh!  Our friend got even more nervous – to himself he said, ‘I never fed the hungry or never visited prisoners’!  At last his turn came.  The Lord glanced through his Book – “Not much here”! ...Yes there is something. “I was sad/lonely/depressed/sick.  But your funny songs cheered me up and gave me a good laugh.  Go straight in.

The little story is apt today as we celebrate the funeral Mass for our Beloved – Dolores.

When she closed her eyes to this world and opened them in the brilliant light of eternity, how filled with joy she must have been, as she gazed at her Book of Life outlining the numerous ways she lived the Gospel we proclaimed today, which was specially chosen for her Funeral Mass.

Yes, our friend in the story reached out to his local closely-knit community – Dolores reached out to the world.  Her good parents (Eileen & Terry), her family, numerous relatives – NO they weren’t proud, but very grateful to have such a special daughter, sister, granddaughter, cousin.  She certainly put her lovely local community of Ballybricken on the map – and not just that, but Limerick City, and the entire county of Limerick.

Her kind personality and beautiful singing voice earned for her numerous admirers.  It must be added that the numbers she rescued from the darkness of depression are impossible to count.  No words are adequate to describe Dolores or to accurately state the influence for good she has been over the years. 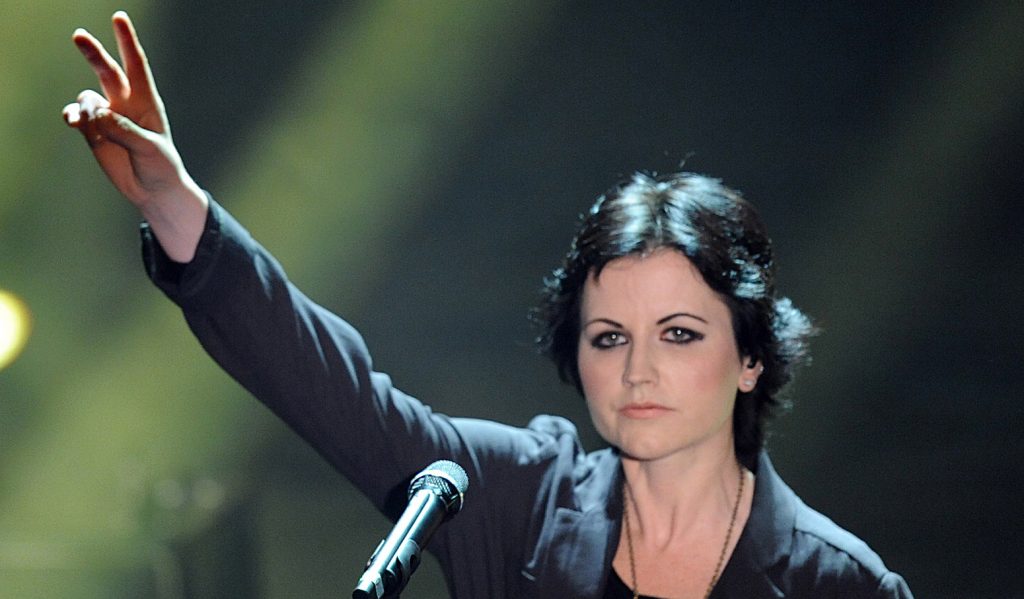 The beautiful and talented Dolores O'Riordan as she will be remembered by the masses.

My first meeting with her was in 1989.  The memory is indelibly written on my mind.  There she is, sitting at the keyboard, playing and singing with the choir in this lovely Church of Saint Ailbe.  That very well deserved appointment was made by my predecessor – Father John Dwyer – a very good friend also of the family.  May his gentle soul rest in peace.  She possessed a very special singing voice – a talent worth its weight in gold.  Intelligent girl that she was, she knew well that she should develop and use that talent.  She also knew that talents were given by almighty God to be used generously for the benefit of others.

She did share the view of Martin Luther King – I quote – “Each of us has a duty to work earnestly to discover and develop our talents”.  These talents are to be used for the honour and glory of God, and for the benefit of others.

Dolores did have an enquiring mind.  I wondered one day why she enquired about Saint Gregory the Great.  He did have a great interest in Church Liturgy and music, and standardised the use of chant in the Church – the reason why we call it Gregorian Chant.  In her visits to various monasteries (Mellery, Glenstal, Roscrea) she loved to listen to the monks chant Vespers (evening prayer) and Compline (night prayer).  Monasteries had a special appeal to her.  Perhaps it was the heavenly odour of monasticism in Holy Cross that prompted her to celebrate her marriage in Holy Cross in 1994.

She did have an unique respect for everybody.  Coupled with that respect, her kind, loving and generous heart, made her a source of great hope to the Church, during its stormy years.  For that we sincerely thank her from our hearts.  Speaking personally – it was not unusual to receive from her a little word of support, encouragement, advice – always given quietly, in a whisper – ‘Mind yourself’ .... ‘I want you and all the clergy around while I’m there’.  How happy she must be today?

This is a difficult day not just for Ballybricken, but for the world.  It is a sad day for Eileen and for the entire O’Riordan family.  For all those who possess the strong faith of Eileen, they know well that we have not lost that gifted and talented singer.  Now she is singing in the heavenly choir – hymns of petition for us.  Yes, being human we shall miss her gentle hand-shake, her loving smile.

To her good mother (24/7) good Samaritan to all, her siblings – Brendan, Terence, Donal, PJ, Joseph, Angela; her nephews, nieces, in-laws, relatives and friends.  To you we say – ‘our sincere sympathy’.

To the children she dearly loved – Donny, Taylor, Molly, Dakota (your father Don).  To you we say – ‘our sincere sympathy’.

To those who were part of her life – Cranberries band mates (Noel, Mike, Fergal).  To you we say, ‘our sincere sympathy’.

Yes we all share in the pain of bereavement with the O’Riordan family.  Bereavement is a very deep, tender wound.  In our sorrow, Saint Paul, gives us some consolation – referring to Christ, he says – “By his wounds we are healed”.  It is our sincere prayer that by his precious wounds, healing will begin without delay; and strengthen your hope, that our beloved Dolores, is now re-united with her father, Terry, her baby brother, Gerard, grandparents, relatives and friends, in the presence of the Lord and Our Lady of Dolours; in the heavenly kingdom, where there is no more pain or suffering or separations; but only joy and peace for all eternity.  If tears are shed in heaven – by necessity they are tears of joy.  Yes, tears of joy, following an excellent performance by Dolores, in the most important and vital gig of all – the Gig of Life itself." 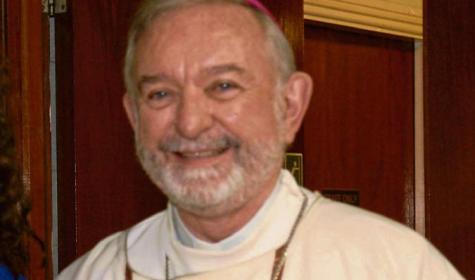 Archbishop Kieran O'Reilly, Archbishop of Cashel and Emly also spoke and said: " Dolores put her God given talents at the service of others.  From an early age she had a passion and love for music.  She has been an inspiration and source of encouragement to many young artists over the years.  Her gifts have resonated in the lives of many and will continue to do so as her music and her songs will continue to be played and listened to.  Her singing voice was unique, far reaching and distinctly Irish.

"In an interview after meeting the now Saint Pope John Paul II, Dolores stated that her faith was one of her greatest musical influences.  She said the Church had nurtured her development as an artist and musician and, for her, her faith was always important – a source of strength in her life," he said.

As Dolores remains left the chapel for the last time, a CD of the Cranberries song When You are Gone was played - a poignant reminder of the unique sound created by Dolores and known so well throughout the globe.

She was laid to rest in a private ceremony in the local cemetery.