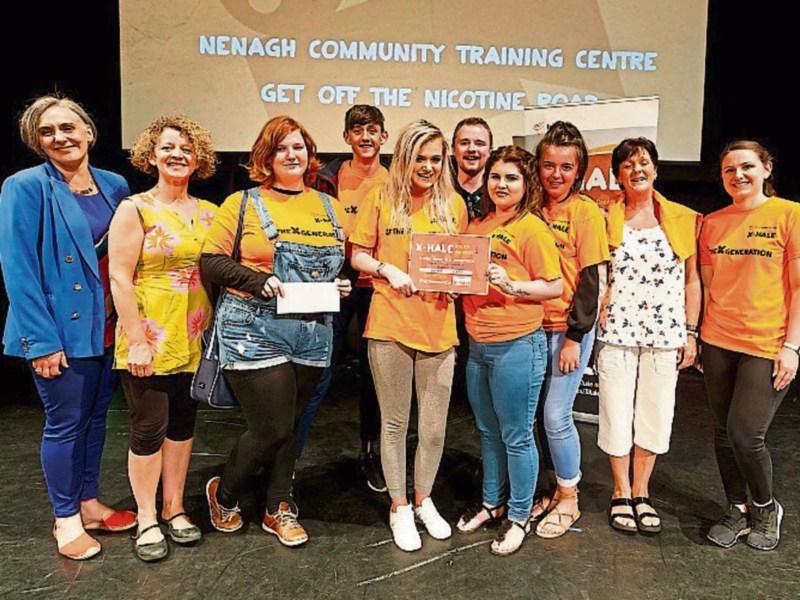 The group scooped the award for their short film Get off the Nicotine Road, which was showcased at the event in the Helix in Dublin.

Over 350 young people from 45 youth and community groups came together to showcase their anti-tobacco films and projects which they created to contribute towards establishing Ireland’s first smoke-free generation.

Nenagh CTC manager Rose Shanahan congratulated the young filmmakers saying the Irish cancer Society initiative supported youth groups to spread the word about the dangers of smoking online and in their community by creating a short film that encourages young people to be smoke free.

“I would like to congratulate Nenagh Community Training Centre on winning their award and for making a positive impact on their health and that of their peers. They have been recognised at this awards ceremony for exceptional effort in their project, said Donal Buggy head of services at the Irish Cancer Society.

He said that there was a need to look at what Nenagh Community Training Centre, and the rest of the #TheXGeneration were saying.

The entries submitted showed that young people truly understood the dangers of smoking and the power of the tobacco industry.

“They have a vital role to play on the journey to Ireland becoming a tobacco-free country,” said Mr Buggy.

While smoking rates have declined in recent years, a new report published by the HSE and Healthy Ireland revealed that 16 per cent of children aged nine or older have smoked cigarettes in their lifetime and 6 per cent are classified as current smokers. In addition, schoolchildren who smoke are 12 times more likely to have consumed alcohol in the last month and 39 times more likely to have consumed cannabis in the last month.

“Thankfully, smoking rates have declined but there’s still a lot more work to do. We know that smoking is the biggest preventable cause of cancer in Ireland, responsible for one in three cancers overall and 9 in 10 lung cancers,” he said.