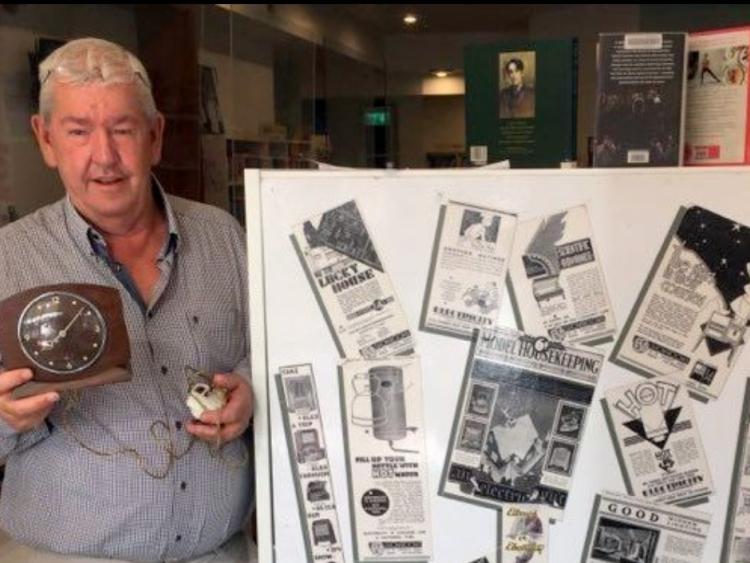 An exhibition from the ESB archives curated by retired ESB employee, and Bansha native Bernard O’Connell caught my attention recently in the foyer of the Tipperary Library at the Tipperary Excel.

I caught up with Bernard recently and he explained to me that it was a clock that was presented to the late Canon John Hayes, PP of Bansha/ Kilmoyler and founder of Muintir na Tíre that gave him the idea to start collecting items.

“On the night that Canon Hayes switched on the lights for Rural Electrification for Bansha (May 14, 1948), the ESB Rural Electrification Officer presented him with a clock which he retained in his possession for many years. Before he died he gave the clock to Tipperary Town’s Mai Maher. Mai would later become Mayoress of Tipperary and in an interview on local radio she spoke about Canon Hayes and about the clock that he gave to her.

“The then ESB branch manager, Eric Rochford, having heard the interview asked Mai if she would be willing to give the clock to ESB for their archives and so it ended up in my possession and that’s how the collection of items began,” Bernard said.

While some items were collected over the years it picked up considerably in 2014 when Bansha had a ceremony to mark Rural Electrification and as part of the programme to mark the occasion a two-part documentary celebrating the 50th anniversary of rural electrification narrated by Mícheál Ó Muircheartaigh and titled Death of the Banshee, was shown in the former Templeneiry Church to a packed attendance.

With interviews and memoirs from ESB staff and rural customers on the operations and aftermath of the Rural Electrification Scheme, the documentary also included the story of Bansha, the first rural area to be signed up for electrification and the influence of Canon Hayes in the RE scheme. Bernard addressed that meeting and spoke about the beginnings of a collection and the significance of items such as the clock given to Canon Hayes.

In attendance at that meeting were the nieces and nephew of Canon Hayes who had a wish to see the clock retained in the collection so Bernard set out to build up the collection by hosting town hall meetings where he would show the documentary and speak about his request for any further items to add to the collection.

“There has been huge interest over the years and I now have a sizeable collection of appliances from the 1930s through to the 1970s,” he said.

"Amongst the domestic appliances there is an original 1928 singer sewing machine, a 1933 copper kettle, one of the first to have a submerged element, washing machines from the 1940s/ 50s/60s, a 1930s toaster, a collection of hair dryers including a Dyson from the 1910s, heaters including one with the original a.é.t. stamp, and a wide range of other items.

“The only source of energy which was once the fire was changed dramatically with the touch of a switch,” Bernard remarked on RE.

It all began for him with the clock given in 1948 to Canon Hayes and which is a major focal point of his exhibition.

It also has something of “celebrity” status as it was featured in the National Treasures 2018 RTÉ series presented by John Creedon, which explored fascinating objects in the hands of ordinary people revealing the social history of Ireland over the last 100 years.