PICTURES: Australian Ambassador enjoys his visit to Tipperary Town and tries out hurling The Australian Ambassador to Ireland, Gary Gray, brushes up on his hurling skills on a visit to the Monastery Primary School in Tipperary Town

I had the great pleasure of welcoming the Australian Ambassador to Ireland, Gary Gray to Tipperary Town on Monday November 15.

The idea for the visit came about because on my interest in prominent Tipperary figures who had emigrated to Australia as featured in my book, Tipperary People of Great Note. 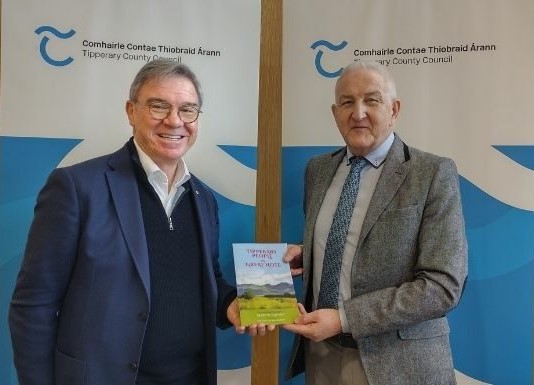 I wrote to the Ambassador saying that I would like to present him with a copy of my book and in Tipperary Town if possible. When the Ambassador agreed to do so I organised a programme around the visit.

The first stop for the Ambassador was to the Tipperary Remembrance Arch in the grounds of St Vincent's Hospital.

The Remembrance Arch is the last remaining section of the Tipperary Military Barracks and is dedicated to the memory of all those who died in the Great Wars and to those whose remains were never recovered. 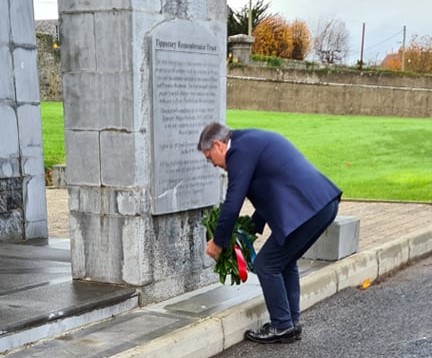 The Australian Ambassador, Gary Gray, lays a wreath at the Tipperary Remembrance Arch

The Arch includes the names of Tipperary people who served with the Australian Army during World War 1.

The Ambassador laid a wreath there and the Last Post and Reveille was sounded by Post 24 IUNVA. A wreath was also laid there by Marion Daly, brother in law of the late Timothy Daly, Specialist Four Army of the United States, who was killed in Vietnam. 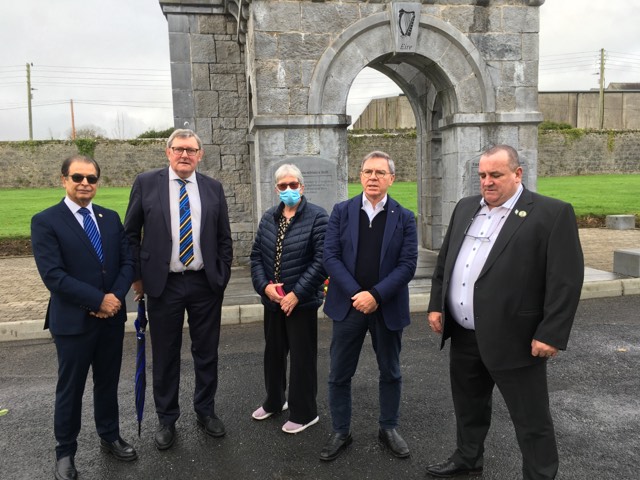 After the ceremony the Ambassador had the opportunity there to meet TY students from the Abbey CBS who are Global Classroom Partners with Aquinas College Perth.

The Ambassador told the students that his own three children had attended Aquinas and he welcomed the initiative that the students were engaged in as Global Classroom Partners and hoped that they might travel to Australia at some point. Then it was on to the Monastery Primary Boys School, where the children had prepared a short programme of entertainment. The children performed a verse of Waltzing Matilda, while playing the ukuleles; they performed their Peace Song, with which they had won the School Choir of Peace Contest; and they performed a specially composed rap about climate change.

Ambassador Gray addressed the children and congratulated them on all they were involved in and highlighted the importance of the climate agenda.

The Ambassador was presented with a hurley and sliotar, and he immediately tried out his hurling skills, to the delight of teachers and pupils. 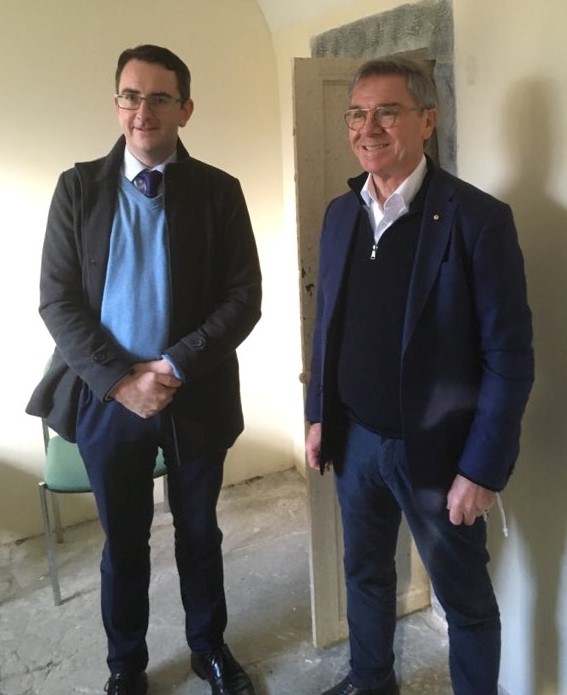 Michael Begley, Tipperary Task Force Project Manager, with Ambassador Gary Gray outside one of the cells at the Bridewell Gaol

Cllr. Marie Murphy, Cathaoirleach of Tipperary County Council, was in attendance by Zoom.

During the reception the Cathaoirleach afforded me the opportunity to present the Ambassador with a copy of my book Tipperary People of Great Note, which details several people who emigrated to Australia and made their name there, including Thomas Givens who was President of the Australian Senate, Richard William Pennefather, the 9th Attorney General of Western Australia, Sir John O'Shanassy, Premier of Victoria and Superintendent John Sadlier, who was responsible for the capture of Ned Kelly, Superintendent John Sadlier.

The Ambassador said that there’s a lot of shared history between Australia and Ireland, particularly Tipperary, and that my book really shed some important light on some of those links and stories.

The Ambassador was presented with a clock, a pen and a Tipperary County Council tie by the Cathaoirleach to mark his visit to Tipperary Town.

After lunch the Ambassador visited the Bridewell Gaol and the Project Manager of the Task Force, Michael Begley, took him on a tour of the the cells, the outdoor area and also the exterior of the adjoining Courthouse (which is no longer in use). Records show that in 1841 John "Red" Kelly, father of Ned Kelly, was tried at Tipperary for stealing a pig and held at the Bridewell. Kelly later travelled on the Prince Regent with 11 other convicts to Van Diemen's Land. He married Ellen Quinn on 18th of Nov 1850 in Melbourne, Victoria, and they had 5 daughters and 3 sons.

The Ambassador was very taken by his visit to the cells in particular and to the history of John Kelly and his son Ned. He welcomed plans that are looking at possible options for restoration and said that he felt it was of great importance that the buildings be restored and a viable use found for them.

After the visit to the Bridewell the Ambassador went to the Tipperary Excel to view the exhibition of memorabilia and historical material highlighting Tipperary Town's military past.

He also had the opportunity to view an exhibition which is currently running in the Gallery of the Excel titled The Erlish Tide.

The Ambassador asked that I convey his thanks to all those that greeted him on his visit to Tipperary.

He said that he looks forward to returning at a future date and to exploring more of the history of the town and the bond between Tipperary and Australia.