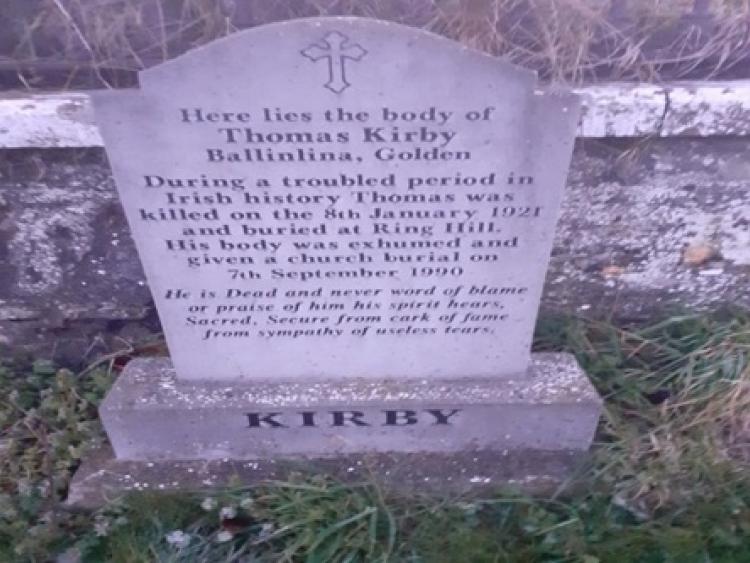 The  headstone in Clogher graveyard, Clonoulty - where the remains of Thomas Kirby rests today having reinterred in 1990.

He was later exhumed and interred in Clogher graveyard 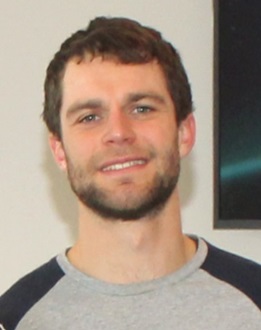 Thomas Kirby was executed in the hills of Rossmore, Tipperary on January 8, 1921 - a story that did not conclude until January 7, 1990 – almost 70 years after his execution.

How Kirby met his death and came to rest in a lonely hillside grave for so long, has generated renewed interest locally. It is the result of deadly undercover activities by crown forces, operating in west and south Tipperary during 1920 and early 1921, and counter intelligence tactics by the local IRA companies.

Kirby a native of Golden, Tipperary and a man with a strange past – he enlisted in the British army in 1901 at the age of 18, and was subsequently thrown out of the army a few months later on the grounds that he was a “harmless lunatic”.

In 1916 he reenlisted again in the British army - and once again this venture only lasted a few months. Around the 1919 – 21 War of Independence Kirby worked as a farm labourer in Annacarty, Tipperary and was noted for hanging out with the RIC and members of the Black & Tans stationed in nearby Dundrum.

In the lead up to his execution, British military conducted a series of raids on houses in the Dundrum, Annacarty, Hollyford, Rossmore & Clonoulty area - that indicated clearly they had inside information. In response to this, IRA counter intelligence went into action.

Suspicions about Kirby’s engagements and movements started to rise. The local IRA unit deliberately fed Kirby two pieces of information which were acted upon by crown forces. As far as the IRA were concerned - they had their man! Historian John Hassett stated “after four months of intensive surveillance and observation, conclusive evidence pointed to Thomas Kirby as the informant to British forces on the whereabouts and movements of the local IRA men.”

The ground beneath Kirby’s feet was shrinking and IRA intelligence were closing in on him.

Tadhg O’Dwyer, (Commandant of the 3rd Battalion, 3rd Tipperary Brigade) in his BMH witness statement takes up the story:
“Although he (Kirby) disguised himself whenever he was out of the barracks with enemy parties, he was soon recognised. Then one night he ventured out alone and was followed and captured in a public house at Ballybrack near Annacarty where he was drinking.

“He was tried by court-martial and could give no satisfactory explanation of his movements. To the charge of spying for the enemy forces he pleaded insanity. He was sentenced to death and was executed by a firing party. Before his death we brought a priest to him, who anointed him and gave him all spiritual aid. We buried him up in the hills near Ballybrack. Kirby’s execution took place on or about the January 8, 1921.”

BMH witness statements note that Kirby was held in a remote farmhouse for several weeks until orders came from IRA GHQ for his execution – other archival documents suggest that ‘he met his waterloo’ on the night after capture.

Kirby’s court martial took place in a farm house in Foilmacduff close to the village of Hollyford. He was executed and buried in Ring hill, Turraheen in a spot where the parishes of Hollyford and Rossmore meet.

A priest in Clonoulty at the time, Fr John Ryan, accompanied Kirby - heard his confession and offered him spiritual aid on his final journey. Local folklore suggests that Fr Ryan was shaken up after the experience and spent the evening in Daverns pub Rossmore, settling the nerves!

Kirby’s remains lay in this lonely hillside grave in Rossmore for nearly 70 years. On Thursday December 6, 1990, after guidance from elderly locals, Kirby’s body was exhumed - orchestrated and identified by the state pathologist, the Gardai and the local community council.

The Nationalist newspaper at the time reported - “The remains were surprisingly well preserved by the peat soil in which they were interred.

When the soil was removed the fully clothed body of a man of 5ft 10 ins in height was found. Beside the remains in the grave were rosary beads and an indelible pencil. A British Army stock great coat, army cap and boots, all in remarkable condition, plus a pipe in a pocket were found.”

On Friday the January 7, 1990 - a day short of his 69th anniversary - the remains of Thomas Kirby were given a Christian burial, in the ancient cemetery of Clogher in the parish of Clonoulty and in the presence of members of the local community.
Thomas Kirby lost his life during a very difficult and significant period in Ireland’s history – this article is not a means of glorifying atrocities but a means of acknowledging events that occurred at a local level during this period.

The national story of the War of Independence is well documented – many of the local stories have been lost to time – at the removal of 100 years I think we are in a good position to openly explore these events. As they say, war is only interesting for those who read about it! 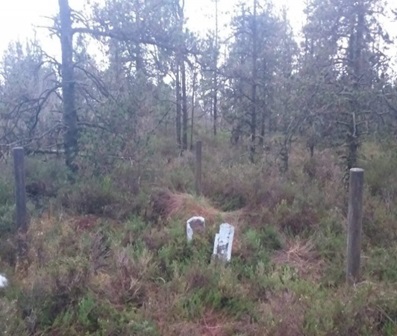 The picture above is the grave Tom Kirby occupied in Ring Hill, Turaheen for nearly 70 years, marked now by two rocks and 3 stakes.

Footnote: This article was written by Conor Hammersley. Conor is an amateur historian with a keen interest in local events that occurred during 1919 - 23 the war of independence and civil war in Ireland. He is also a Teagasc Walsh Scholar and PhD researcher in the IT Carlow. E: conor.hammersley @itcarlow.ie