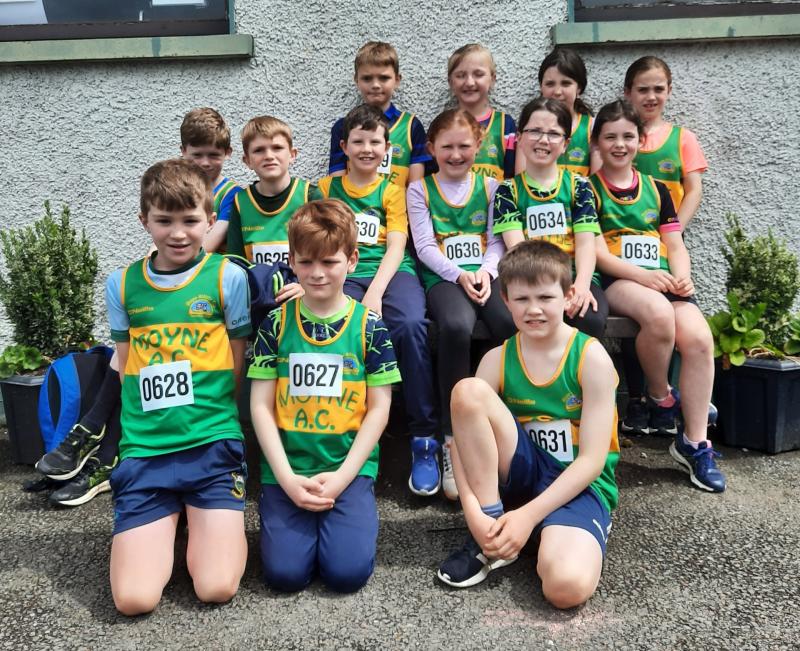 Despite the blustery conditions, the rain held off for the duration of the event and for our seventeen young athletes it proved to be a great day’s competition. Gold medal performances came from Geoffrey Morrissey in the Boys U/10 Long Jump, Billy Flanagan in the Boys U/12 Long Jump, Órlaith Costigan in the Girls U/9 Long Jump and Darragh Maher in the Boys U/10 300mts.

The relay for this competition sees all athletes mixed together at the various age groups rather than in their respective clubs and in addition to the above medallists we also had Fionn Phelan, Abbie Manton, Cian Kelly and Leo Cullen bringing home County medals. Well done to each and all on their performances and thanks once again to the parents for supporting their children and helping out on the day and to our club officials and coaches who helped in the running of the event.

Three of our athletes travelled to Santry in Dublin at the weekend to participate in the 150th running of the National Senior Track & Field Championships alongside the cream of Irish athletic talent.

On Saturday Katie Bergin and Ber Spillane were in action in the 200mts. Katie finished third in her heat in 25.52 which saw her through to the final and against the best in the country at this distance she placed seventh in 26.12. Ber, in her first outing at this level, finished sixth in her heat in 30.63, the winner of which, Lauren Cadden, Sligo AC went on to win the national title later in the day.

Sharon Cantwell took part in the heats of the 1,500mts and again the dept of competition at this level showed with just on 30 athletes taking part. Sharon ran strongly throughout to finish 14th in her heat in a time of 5.04.48 just a couple of seconds shy of her pb. Sunday saw Katie Bergin into action again as she competed in the 100mts championship.

Four heats were needed to separate the top athletes to the semi finals with Katie making the grade as an automatic qualifier finishing third in 12.70 in Heat 3. In the semi final against a stacked field including Rhasidat Adeleke, the eventual champion and Ireland’s fastest athlete over 60, 200 and 400mts, Lauren Roy, City of Lisburn, Sarah Leahy, Killarney Valley, and Lucy Mae Sleeman, Leevale she ran 12.78 to finish 8th overall. Great running from all three athletes and terrific to see the club represented at national level.

Tullamore will be a hive of activity this coming weekend as the National Juvenile Games and U/12 & U/13 Field Event Championships take place on Saturday and Sunday and it is great to see that the club will be represented at this level of competition.

Meadhb Hall and Lily Murphy will be in action in the Juvenile Games in the Girls U/9 60mts and Long Jump, Gerard Delaney in the Boys U/12 Turbo Javelin, and Alan Spillane in the Girls U/15 800mts. We wish all four athletes the very best of luck in what for each of them is their first time competing at this high level of competition.