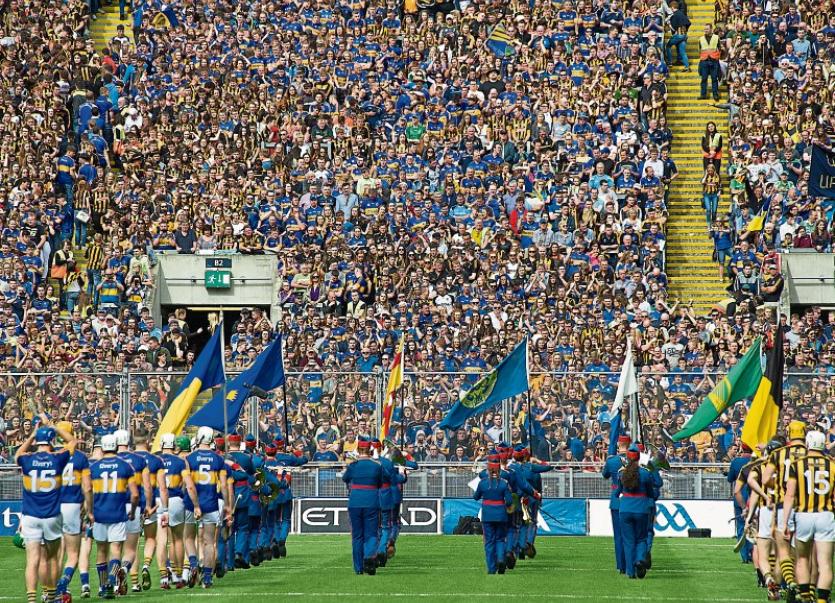 “Nothing revolutionary about it” declared the calmest of leaders in the aftermath of the battle but the army of Tipperary supporters who joyously embraced the overthrowing of a dominant hurling power will need more convincing than that.

Granted Michael Ryan was commenting on his teams style of hurling rather than the glorious occasion that unfolded in Croke Park on Sunday,but Tipperary supporters knew they had witnessed a changing of the guard, a seismic shift in power.

Tipperary hurlers answered the battle cry, sent out a defiant 'No Surrender' to bring down a hurling empire in an epic clash.

Years of torment, hurt and oppression were wiped out.

The revolution on this occasion was televised to millions and enjoyed by Tipperary people proudly wearing their county colours far from home in pubs and bars all over the world.

The black and amber clad invincibles were ripped asunder. A trio of Seamus Callanan, John Bubbles O Dwyer and John McGrath blitzed Kilkenny with 2-21 between them as the Cats failed to cope with the resources of Tipp's armoury.

Cody’s charges were plummeled into submission , blown apart by the rage and intensity of Michael Ryan’’s troops whose heart and passion for the cause showed no boundaries.

Chasing three in a row the rulers of the hurling world had been swept aside on a day when Tipperary showed no fear.

Everyone in blue and gold stood tall. Tenacious defender Cathal Barrett epitomised the brave mentality when asked about the giants of men he had to mark on the day.

“I am not afraid of the big man” said a defiant Cathal Barrett.

This mindset was instilled in every one of his colleagues who showed no hesitation in going over the top of the trenches for their county.

That collective desire drove on the Tipperary charge to bring about the downfall of Kilkenny.

It was a day of unparalleled emotion and joy for Tipperary people that began with a ceremony in Talbot Street when the feats of Sean Treacy and his flying column were commemorated..

Treacy was shot in the War of Independence battle with the Black and Tans in the capital and every year Tipperary reaches an All-Ireland final he is remembered at the spot where he was shot.

On Sunday as the Tipperary hordes descended on Dublin to lower colours of a slightly different hue, the Black and Amber, hundreds of proud Tipperary men women and children gathered for the event.

An oration by Boherlahan man Seamus Leahy and the reading of the Proclamation by Kilsheelan man Sean Nugent was a poignant reminder of the sacrifices Tipperary men like Sean Treacy made for their country.

The gathering then marched onwards to Croke Park to witness the senior hurlers of the county dismantle a hurling powerhouse by a staggering nine points, the minors secure an All-Ireland title and a wonderful jubilee team honoured at national headquarters on an historic day for Tipperary.It was the first senior and minor hurling double for the county since 1949.

“You just could not make up the script” said a beaming county board chairman Michael Bourke after the final whistle.

GAA President Aogan O Fearghoil announced the return of the Liam McCarthy Cup to the “hills and valleys” of Tipperary as he handed over the coveted silverware to an inspirational leaderBrendan Maher.

“ To the people of Tipperary , Liam McCarthy is back” declared the captain

from the Hogan Stand, an edifice named after another Tipperary sporting warrior Mick Hogan, shot dead by the British Army on Bloody Sunday while playing football for his county in Croke Park,

One hundred years on from the battle that saw the rubble of Sackville Street lay the foundations for Hill 16 the Slievenamon flag was proudly unfurled on the famous terrace to herald a Tipperary rising, the arrival of new rulers of the hurling world.

All that was missing on the day of all days was “Festy” and a rendition of “The Galtee Mountain Boy”.