All-Ireland glory for manager in his first year 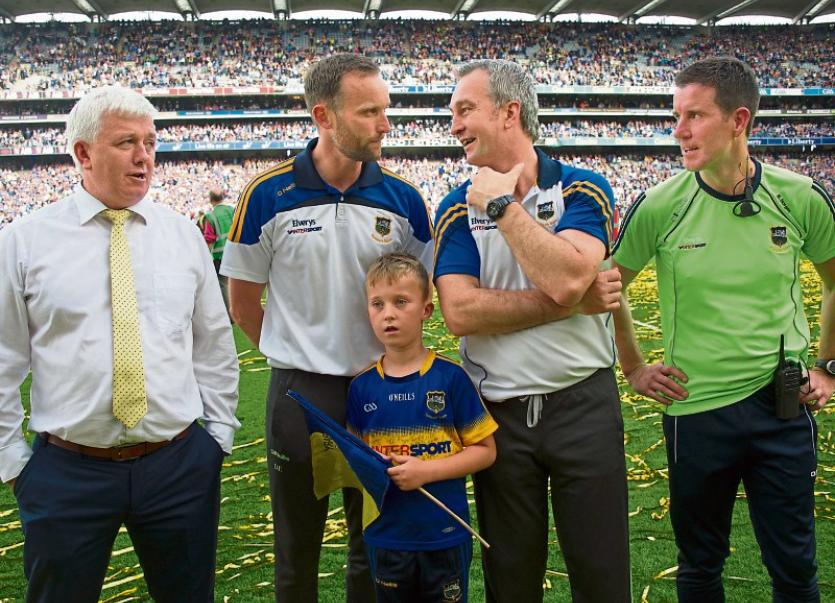 It lasted only seconds but the victory dance enjoyed by Michael Ryan and his managment team on the Croke Park sod when the final whistle sounded was a celebration of an almighty commitment to achieving the ultimate goal.

A selector for six years under Liam Sheedy and Eamon O Shea, manager elect for a year before taking on the responsibility of the top job this year Michael Ryan joins an elite group of Tipperary men.

The modest Upperchurch man was quick to direct some of the praise for this memorable victory to his predecessor Eamon O'Shea.

Describing the former manager as a friend and father figure to the players Michael Ryan said the intensity and the attacking fluency displayed on the day was out of the “Eamon O Shea handbook”.“Eamon and I are great friends. We soldiered together in Liam’s regime for two years and when Eamonn came knocking at the end of 2012,

“I had no hesitation coming on board with him. We were all devastated we did not achieve something with him because he was a great figure in our group and he remains a great friend to our group. I would say Eamonn’s influence was seen out there as well and he would have been thrilled with that work-rate, the skill on show. All that was out of the Eamon O’Shea book of hurling.”

Looking back on the decision to appoint him as manager elect Michael said it was done with the best intentions at the time.

“It was probably a bit unusual but it was very well intentioned,” he said of the move.

“Eamon was sure he wasn’t going ahead beyond [last season]. And in every county, particularly Tipp, speculation can run riot. And the other reason is that we were on the right path. We wanted continuity. So it has worked out.

“This wasn’t created this year. This was born through the last five years when we weren’t successful but were working very hard. I think we had four or five debutants out there today. Those guys have just opened up a whole new chapter for themselves, and they are going to relish coming back to try and do something in 2017.

He felt the exploits of Tipperary would have a major impact on next years championship and he expected other teams to step up.

“Look, what can we say about Kilkenny, “They’re the ever-present team and usually the winning side as well.

“This is a fantastic day for Tipperary hurling. I think we might have awoken other giants that may have been sleeping though, in that every other county is going to take huge encouragement from what we’ve achieved this year.

“Because we’re all in the pot; every one of us hurling counties are chasing Kilkenny and those are the facts. And for one of us to come through and break that mould for once… don’t get me wrong, that’s not a foregone conclusion that that will ever happen again, such is the quality of Kilkenny. But I think we’re after sending home a lot of teams that I think will set 2017 alight.”

Ryan expressed satisfaction with how his young team reached such impressive levels of work rate but said there was nothing revolutionary about supporting one another and working hard.

“There’s a lot spoken about intensity,” he said. “It takes a lot of emphasis off of other things. Look it, what’s intensity? Guys just doing their best out there.

“I think both sets of players did exactly that. We got the vital few scores to put the bit of daylight in it but I thought it was a great second half from Tipp’s point of view.”

The manager was appreciative of the response shown by his team to the opening Kilkenny goal which normally signals a Kilkenny drive to close out games ijn lethal fashion.

“I was really happy with the immediate response,” said Ryan. “We kept our composure and kept the ball and worked it up the field. The guys were just in great form. I couldn’t tell you what our wide count was in the second half but I’d say it was very small. It felt to me we were hitting the sweet spots and they were going over.”

Ryan, a no nonsense defender in his day, was very pleased with the levels of intensity shown by his charges.

He said rather than make a point of drawing on the pain of defeat from previous years they treated it like a new day.

He acknowledged the hurt endured by his players on the back of a run of championship defeats to Kilkenny but said they had to come with a different approach to overcome Kilkenny.

. “They did hurt, Mother of God they did hurt but you move on and you can’t live your life looking over your shoulder.

“Today was a brand new day, it was there to be played. Sometimes history can be a burden so you have got to put it in its place, take what you can from it, learn from it and confine it to history after that” he said.