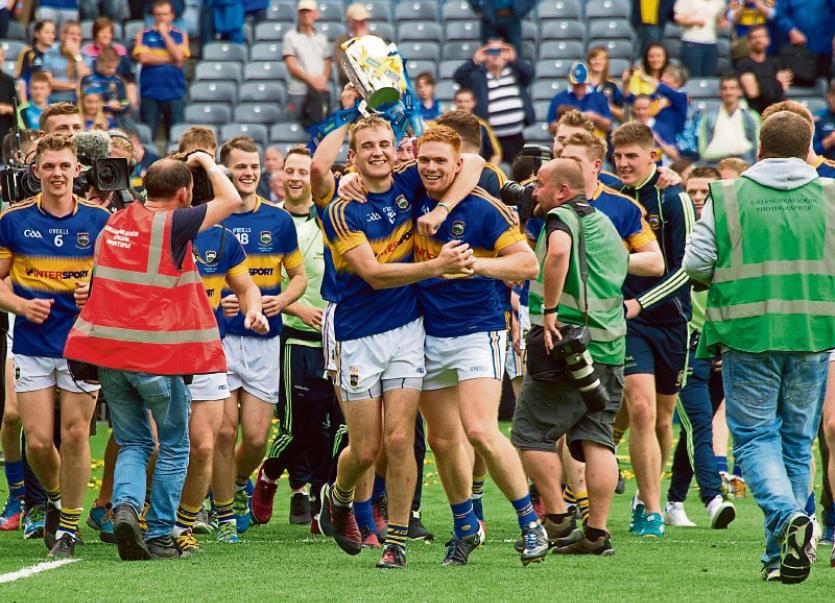 It will surely go down as one of the greatest days of redemption for Tipperary hurling. The seniors finally broke the Kilkenny jinx – and did so in spectacular fashion. The minors made it a rare day of double delight at Croker.

You dream of days like these but you don’t really expect them to materialise. What an occasion! The minors set the mood, the 1991 winners continued the feel-good factor, and then the seniors embellished it all with an outrageous performance that floored Kilkenny.

It’s funny how past history weighs heavily on your mind on these occasions. We’ve been under the Kilkenny cosh so much in recent times that we were almost afraid to dream. Cold logic suggested that the planets were lining up in our favour, but you dreaded tempting fate with any suggestion of confidence.

We knew we had the hurlers but did we have the warriors? Well, that question was emphatically answered from early on as the players turned in manic shifts. The stats people later revealed that we put in fifty-six tackles against Kilkenny’s thirty-four.

One little cameo highlights the point. As we awaited the final whistle in the seventy-third minute ‘Bonner’ Maher chased down Robert Lennon out to the corner flag. The game was effectively over but ‘Bonner’ still hassled and harried as if the outcome depended on preventing that clearance.

More than anyone else ‘Bonner’ epitomised the work ethic of the entire team. This has been the Michael Ryan template since he took over last year. He wanted players who were prepared to graft until they dropped – slackers need not apply.

And so our twenty-seventh All Ireland title has Michael Ryan’s fingerprints all over it. Just look at how he reshaped the team from the 2015 formation. Seamus Kennedy was drafted into wing back and Ronan Maher moved to number six. A new midfield partnership replaced retirees, James Woodlock and Shane McGrath. Michael Breen brought drive and strength to that zone. And then in attack you had Dan McCormack and John McGrath added. The core of the team was inherited from Eamon O’Shea but a new look was added.

I recall last year after the Galway defeat a former Tipp goalie suggested that we needed two new midfielders and two physical forwards. In hindsight wasn’t it quite a prescient comment?

I dreaded this game coming down to a tight finish and thankfully the deal was well done long before Brian Gavin called a halt. That’s not to suggest that it was smooth sailing throughout – it wasn’t. In fact it was only in the final quarter that we could allow the tension to drain away.

The first half was tight with Kilkenny staying well in touch. Encouragingly, though, our forwards were moving more smoothly. All six were on the score sheet by half time, Callanan the main man with five from open play in that period. We weren’t flawless in our play -‘Bubbles’ and Dan McCormack hitting wides and Callanan failing to get elevation on what looked like a simple free - but we were playing the better hurling. T.J. Reid frees were keeping Kilkenny in tow though they came close to a goal too when Gleeson did well to deflect away Fennelly’s shot.

The big story, though, was already emerging at this stage. Tipperary’s inside forwards were in the mood to wreak havoc on Kilkenny’s last line of defence. Callanan was drifting left and right to great effect, his sheer movement baffling Joey Holden.

And as for ‘Bubbles’ he was already making a mockery of those who suggested that he should be kept in reserve. Our best goal chance in this spell fell to Callanan whose rocket flew just over Eoin Murphy’s crossbar.

So, half time arrived with Tipperary two-up. So far so good, the omens were positive though the game had still to be lost and won. Kilkenny’s third quarter has often been critical in games and we nervously awaited the re-start.

When Kevin Kelly eventually shoveled the ball into our net about six minutes into the second half the game seemed to be following a familiar script. The reigning champs were two-up and so often in the past this would be their cue to drive on.

Not this time, however. Tipperary stayed composed and that Kilkenny goal was in fact the cue for a scoring surge by the blue and gold.

By now our inside forwards were ‘skinning’ their markers and the scores flowed freely. ‘Bubbles’ cracking goal was crucial in underlining the trend. The lead was stretching out, every flag roared on by the Tipp following as the Kilkenny management looked bewildered on the sideline.

Jason Forde came on for Michael Breen and made an immediate impact. Our second goal was a McGrath special, Noel intercepting a Kilkenny hand-pass to set up John for the emphatic finish. Even if Richie Hogan pulled one back for Kilkenny it did little to alter the game’s trend now. The excellence of Eoin Murphy deprived Tipperary of more goals, ‘Bubbles’ and John McGrath in turn being thwarted. It mattered not; our attack was in free-flow and the stream of points continued.

At the other end the defence was fearless and defiant, standing up to everything Kilkenny could throw at them. The blocks and the hooks continued, the tackling was ferocious and Darren Gleeson stood firm once again to deny another Kilkenny goal.

Eventually the long whistle sent us all ecstatic. Kilkenny were unseated, the pain of past defeats washed away in the euphoria of a first All Ireland in six years. Our inside forward line had contributed 2-21 of the total score, Kilkenny’s lack of remedial action in that zone a puzzle even to Tipp followers.

Through it all there’s no doubt the Tipp team was truly heroic on its day of redemption. Goalie Gleeson made a few fine stops as well as delivering some monster puck-outs, at times finding our full forward line. Our defence stood firm against all assaults. Cathal Barrett put aside the memory of the Galway game to resume normal service beside Barry and Cahill on a resolute full line.

Ronan Maher was majestic at centre back, undaunted by a succession of different markers deployed in an attempt to limit his influence. Brother Paudie too was magnificent, a second half fetch and point likely to linger in the memory for many years. Seamus Kennedy’s development has been quite extraordinary since his decision to concentrate on hurling. He certainly fits the Mick Ryan mould of strong, commanding defenders.

At midfield Brendan Maher turned in a huge shift of work; Michael Breen’s touch seemed to desert him a little in recent games and he was eventually withdrawn after fluffing a possible goal chance. Still it has been a huge year for the Ballina man.

But it was the attack that really blew out the lights on Kilkenny. Callanan’s nine points from play represented a phenomenal contribution to the win. ‘Bubbles’ on 1-5 and John McGrath on 1-3 were also deadly shooters. The work of the half line can’t be underestimated either, ‘Bonner’ leading the way but both Dan McCormack and Noel McGrath also inputting majorly to the win.

Perhaps this was one that was coming for Kilkenny. The depletion of their resources in recent years and that injury to Mick Fennelly certainly weakened them. Perhaps the strain of the replay against Waterford sapped energy also. For whatever reason they were vulnerable but Tipp still had to produce the goods and we can only acknowledge the magnificent effort by all involved.

Not for the first time the minors dwell in the shadow of the seniors. I felt in advance that this was a tricky game for the teenagers and it certainly had its problematic areas. They built a reasonable lead early on but were reeled in by half time when just the minimum separated the sides.

We could be grateful for a fine stop by Ciaran Barrett in that opening phase. Had we slipped behind at any stage this would have been a difficult one to redeem.

Ultimately the Jake Morris goal was a critical item in giving us some breathing space. Jake had his ‘Bubbles’ moment immediately after the goal and was lucky to go undetected. Shane Neville’s introduction and three-point input was hugely important in the win.

In the end the team saw the game out impressively but this wouldn’t rate as their smoothest display. As often happens the heroes of other days found the going tough this time. Whereas the likes of Cian Darcy and Rian Doody were key men in the semi-final this time it was the contributions of Jake Morris and man-of-the-match, Colin English, that were so important.

I’m delighted for Liam Cahill and the players. Had they slipped up at any stage the snipers were waiting in the long grass. In that sense the win was vindication for the management and hopefully it sets the parameters for future policy. Football must the promoted, but do it parallel to hurling, not in overlap.

So a first minor/senior double since far-off ’49 sends the county into celebration. Already the winter looks shorter. Happy times.