'We are of you, manager Michael Ryan tells the ecstatic fans 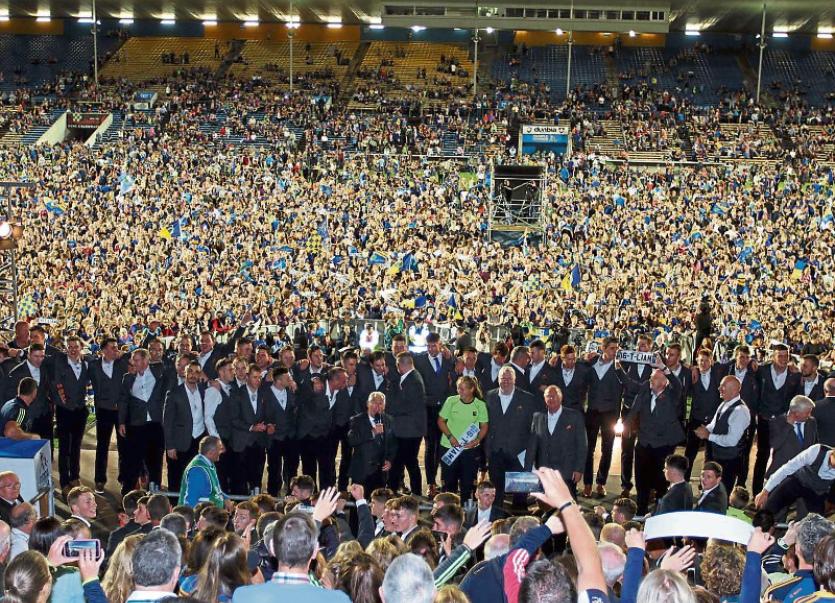 An estimated 20,000 fanatical supporters poured into Semple Stadium on Monday evening to welcome home the double All-Ireland winning champions from The Premier County.

They returned home to the sporting capital of Ireland as Chairman of the County Michael Burke proclaimed.

They came from all corners of Tipperary, and indeed from further afield too, bedecked in their blue and gold colours, waving flags, in high spirits and ready to raise the decibel levels when the players made their way into the stadium and Ardan Ui Riain.

The crowd had been well warmed up by the time the players arrived - we have rarely seen as many on the pitch since the times of the Feile concerts - and everyone was in jubiliant form when County Board PRO Joe Bracken welcomed the minors onto the stage, led by their captain Brian McGrath and Manager Liam Cahill.

The Ballingarry man had words of advice for the clubs of Tipperary as he appealed to them to 'keep putting hurleys into the hands of the children'.

"We now have those boys down the road ( in Kilkenny) on a backward step and that's the way to keep them," he said to great cheers.

Tipperary is always privileged to have the Patron of the GAA, the Archbishop of Cashel and Emly in our midst, and Archbishop Kieran O'Reilly was in attendance to wish the minors well in their future careers - he had presented the Irish Press Cup to Brian McGrath on Sunday.

Tipperary's First Citizen Siobhan Ambrose was also on hand to offer congratulations to both teams on bridging the 67 year gap, while County Board Chairman Michael Burke paid tribute to all involved in both teams for the huge effort it took to bring home the silverware.

"Tipperary is the sporting capital of Ireland. We have hurlers and footballers. We produce rugby players, soccer players and horses. We have real sporting pedigree in Tipperary," the Upperchurch Drombane man said.

Tipp senior Manager Michael Ryan spoke about the joy of returning home with the silverware.

"We didn't want to be anywhere else other than here with our own people in the capital of hurling, Thurles.

“You have no idea how much it means to us that you got behind us and helped us along so much. We are of you, amongst you and cannot wait to get back to you.

“This is for you, the people of Tipperary," Michael said to huge cheers.

Captain Brendan Maher too was in bullish form when he spoke to the supporters and he looked to the future immediately.

"Hopefully this is the beginning to something new for Tipperary. We are desperate for success and we want to bring back the Liam McCarthy again in 2017," he said, before throwing down the challenge to the minors to push on and become the seniors of tomorrow.

A premier night, organised with premier precision for the Premier people proved to be a truly memorable one.