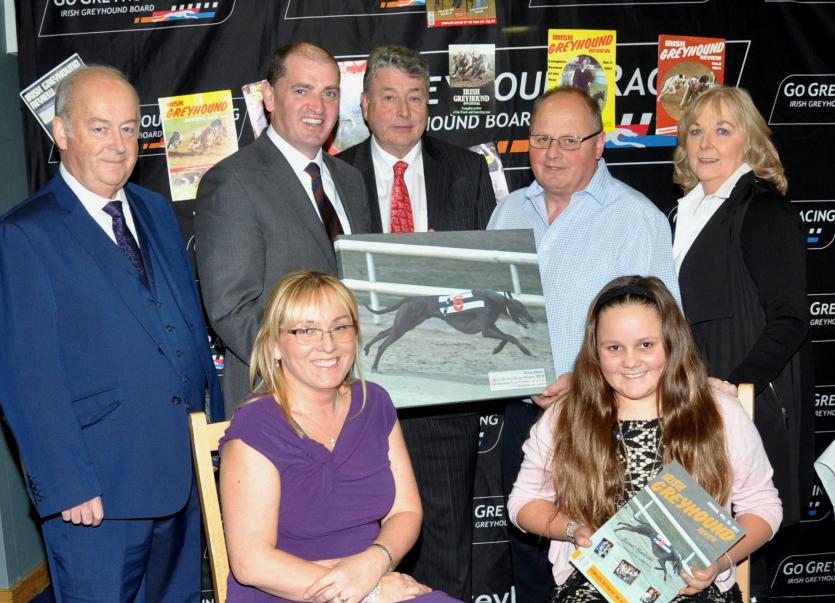 Paul Keogh (TD & Minister with responsibility for Defence) pictured making a Presentation to personality of the year Graham Holland.

The 'Irish Greyhound Review Annual' has named Golden's Graham Holland as their personality of the year.

When Graham and Nicky Holland decided to give the Irish greyhound scene a go some 14 years ago they could not have dared to imagine that they would enjoy such success in their new home.

Initially their dream was to have a maximum 12 dogs in training at any time and they bought a site in Golden in County Tipperary where they built their new kennels.

That intention to have 12 greyhounds in the racing kennels soon became a distant memory as they began to send out the winners in streams at tracks all over the country.

They have enjoyed some remarkable years, but 2016 has been undoubtedly the best and their achievements have resulted in Graham being named the 'Irish Greyhound Review Annual' as their personality of the year for a second time.

In the year to date the Holland kennel has been responsible for over 230 winners at Irish tracks and 160 of those have been at Shelbourne Park. These winners covered all grades, but the Holland’s achieved a lifetime ambition when Rural Hawaii raced to victory in the BoyleSports Irish Derby final in September. He actually had three dogs in the Derby decider and Sonic was third. But there were also other major successes such as: Clares Rocket in the BIF Produce Stakes and Doire Construction Champion Stakes, Skywalker Manner in the Irish Independent Irish Laurels, Sidarian Pearl in the HATS Puppy Oaks, Ballydoyle Honey in the Gain Christmas Oaks and Rural Maui in the Quickpark Limerick Oaks. Yet he was pressed hard by Paul Hennessy who won his first English Derby in June and has so become only the second trainer ever to complete the treble of the Irish, Scottish and English Derby finals.

Others to poll well were Pat Buckley and Noel Browne.

The award was presented at Shelbourne Park on Monday, November 7th by Paul Kehoe (TD & Minister with Responsibility for Defence).

The 39th volume of the 'Irish Greyhound Review Annual' (128 pages) has now been published. The purpose of the review since it was first launched 39 years ago was to record the performances of Irish greyhounds and that has remained the aim of the publishing team since then. Indeed, the volumes form an in-depth history of greyhound racing in this country. All the major stories from the Irish tracks and the big events on track and field are detailed in depth while the UK Scene is also thoroughly covered.

The annual was launched at Shelbourne Park on Monday, November 7th by Paul Kehoe (TD & Minister with Responsibility for Defence).

The 'Irish Greyhound Review Annual' is published by Margaret Walsh (originally from Killenaule) and is edited by Michael Fortune.

The 'Irish Greyhound Review Annual' retails at just €15 (€18 including postage and packaging) and is available from all leading newsagents. The annual can also be ordered by post from Irish Greyhound Review, PO Box 7993, Dun Laoghaire, County Dublin. Phone 086 241 8080 or eMail walshmgt@eircom.net.