Ronayne: ‘These players are going to become household names in Tipperary and further afield’ 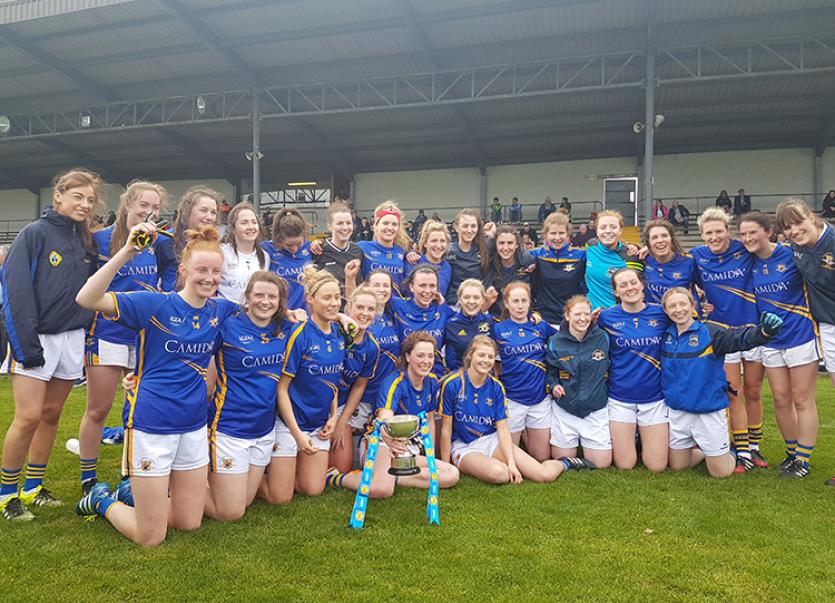 The Tipperary team pictured celebrating in Birr on Sunday afternoon.

Manager Shane Ronayne was beaming with pride at St Brendan’s Park in Birr on Sunday afternoon when the Tipperary ladies football team fought back from six points down to win the replayed Lidl National Ladies Football Division Three League final (0-15 to 1-10).

“They are serious players,” Shane Ronayne told the Tipperary Star in the aftermath of this dramatic affair.

“As I said before we had five Tipperary girls starting the O'Connor Cup final (third level colleges) - second only to Cork. That is the level that we are aspiring to get to. These players are going to become household names in Tipperary and further afield. Everyone involved in this set-up knows the effort that they are putting in and the talent that they have. I am very proud of them today.”

In first half injury time Tipperary trailed 0-5 to 1-8, but proceeded to score eight points without reply either side of the interval to streak into a two-point advantage (0-13 to 1-8). And, Tipperary’s resilience was tested to a significant degree in the final quarter when a series of sin-binnings reduced Shane Ronayne’s team to just twelve players. To their credit, however, Tipperary dug deep and even though Wexford drew level with three minutes to play the Premier ladies earned two late frees to seal this famous win.

“It was an unbelievable battle. I suppose when we were down to twelve players I was getting very worried, but it all turned around again in the space of a couple of minutes,” Shane Ronayne explained.

“We started reasonably well and we were happy enough, but all of a sudden they hit us with a sucker punch of a goal. Lauren (Fitzpatrick) was unlucky and was maybe unsighted because of the sun. We were six down, but we got a great point just before half-time - that gave us a great bit of hope,” the Tipperary ladies football manager said.

“We knew there was a strong wind there and we knew that it was going to be very difficult against Wexford. They were very well set up and we could not get the shots off inside the area where we would normally be scoring. We spoke about that at half-time; the stuff we had worked on in training and about being a little bit braver. They really stepped it up in the second half and they were really tuned in. And, they had to battle away there. There were three or four minutes there when they were down to twelve players - it was fantastic.

“Today is a huge day for them - to get over the line they had to get through a serious, serious battle. I think they will learn a lot from today and this is very important for us going forward. We got over the line in a big game and fair play to them; they really battled through. They really battled hard and we are delighted to get out of here with the win.”

PLAYER OF THE MATCH

Aishling Moloney collected the player of the match award and while no one could deny the impact made by the Cahir star on this final please spare a thought too for the performances of Emma Buckley, Jennifer Grant, Gillian O’Brien and key playmaker Aisling McCarthy. Indeed, the collective performance of the entire team was something to cherish. And, that was an aspect of the Tipperary display which delighted manager Shane Ronayne.

“Yes, the battling qualities of the players when things may not have been going all that well for them. They drove on and they kept going. And, players were asked to play in different positions - just look at Niamh Lonergan. This time last year she had her cruciate (knee ligament operation) done; that was her first start and I am delighted for her. She has put in a ferocious effort to get back. I thought she was ferocious for the forty minutes that she was on for,” Shane Ronayne revealed.

“Caoimhe Condon did not have her greatest game the last day, but I thought that she was outstanding today. Orla O'Dwyer, for a young girl doing her leaving cert, was brilliant inside in the full-forward line. She won a few vital balls there near the end. I thought Emma Buckley defended very well at the back and I thought Siobhán Condon did a super job. I could just keep going - they were mighty at the back.

“Up front you had the two Aislings (McCarthy and Moloney) - in the first half things were not going Aisling's (McCarthy) way, but she battled so hard there in the second half. She won ball that she should not have won and Moloney was just hitting points from everywhere. Look, she is fantastic. She stepped up to the plate and she is prepared to have a go - good forwards, you know, must be prepared to have a go. They have to have that bit of confidence to have another cut and I thought she hit some phenomenal points in the second half that really got us back in the game.”

Tipperary will face Limerick in the opening round of the Munster championship on the June Bank Holiday weekend (fixture details to be confirmed) - Clare will also compete in the provincial intermediate championship this year while the Munster final is scheduled to take place on July 8th.

And, manager Shane Ronayne knows that his team will have to up their performance a notch or three to compete effectively in the up-coming provincial series.

“We definitely will,” agreed Shane Ronayne.

“We definitely have to up it, but I think today's game will really stand to us. Wexford are every bit as good as us so I feel that today's game is really going to benefit us going forward. But we are definitely going to have to step it up ten per cent."