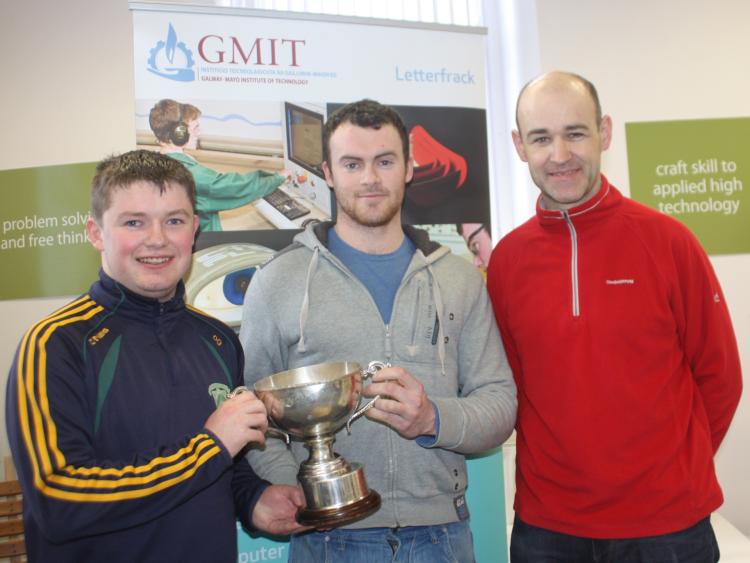 If at first you don’t succeed just try and try and try again or in the case of the hurlers of GMIT Letterfrack just keep trying!

It was hardly any wonder therefore when the boys from the small Connemara-based college really savoured their first Fergal Maher Cup final victory at the NUIG grounds in Dangan, Galway on Saturday, February 25th.

After suffering the heartbreak of four previous final defeats, GMIT Letterfrack had finally got over the line after a thoroughly-deserved six-point victory over the Marino Institute of Further Education.
And, having already lost to their opponents twice previously, including a narrow one-point victory in the qualifying stages, GMIT Letterfrack had, in the words of their Offaly-born captain and centre-back Tom Rigney, won the one that mattered as he proudly held the Fergal Maher Cup aloft in front of his delighted team mates who represented eight counties in total.

Not surprisingly the team, which comprised of predominantly Galway men, also included students from Tipperary and Offaly (two each) and one each from the Leinster counties of Kilkenny, Laois, Westmeath, Kildare and, finally, the one sole Ulster representative from Donegal.

In his humorous victory acceptance speech Kinnity man Tom Rigney paid tribute to the effort of his history-making team mates and of course their manager Danny Collins - a Clare man who, according to the GMIT Letterfrack captain, was also believed to be in the running to replace Davy Fitzgerald!
As the full impact of the college team’s historic achievement now begins to rub off on some of the local hostelries in a place that has not enjoyed too much previous sporting success, GMIT Letterfrack’s victory will have have been particularly special for Tipperary native Paul Leamy - the college lecturer, who along with fellow lecturer and Galway man Sean Garvey, were jointly responsible for bringing hurling to Letterfrack way back in the late '90s.

“I first came to Letterfrack as a student in 1994 and eventually returned as a staff member on the invitation of the college in 1999 when I was appointed as a lecturer in furniture production,” Clonakenny native and father of five Paul, who is married to local girl Karen Walsh, said.

“I helped to start the college team here with fellow staff member and Galway man Sean Garvey along with the help of Shane Coen - a Galway student from Ballindereen in 2001 - and I suppose up until the recent final success we had been reasonably-successful after qualifying for four Fergal Maher Cup finals, including last year against Sligo IT. But our best performance before this year was in 2008 when we narrowly lost out to Edinburgh Napier by just four points. Two years after setting up the team GMIT Letterfrack won promotion to the Ryan Cup competition by winning the division three league title.”

Students from all over Ireland learn wood craft and furniture-making at GMIT Letterfrack which enrols just over 200 students. It was therefore not surprising to hear that some of the college’s former graduates down through the years have also included quite a number of Tipperary students before Clonoulty’s Gary Donnelly and Cashel’s Colin Brosnan featured on the current team.

“Quite a number of midlands-based students have also studied here in Letterfrack down through the years including Morgan Lalor (Ballyskenagh), Tipperary men Patrick Hayes (Moycarkey-Borris) and Peter Maher (Thurles Sarsfields), but Gary Donnelly (Clonoulty-Rossmore) and Colin Brosnan from Cashel have now become part of GMIT Letterfrack history,” Paul said.

On a recent visit to the college at the foot of the Diamond Hill and adjacent to the Connemara National Park, some of the players, including their captain Tom Rigney and members of the team management, were pleased to show off the trophy that the college had waited so long to bring to Letterfrack.

In a room where the college exhibits some samples of the kind of wood craft taught and that it has built such an impressive reputation since it was established in 1987 they posed for photographs before being feted by their fellow students and college principal, Cork man Dermot O’Donovan, in the college cafe.

Later that same evening the local Letterfrack Country Shop - the team’s sponsors, treated the team members and staff to a celebratory dinner also in the college cafe.