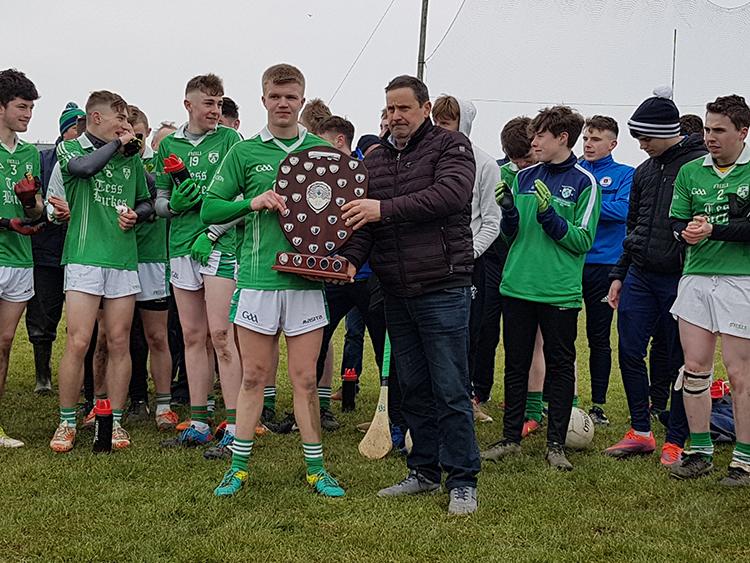 North Tipperary Board chairman Mike Flynn (Kiladangan) pictured presenting the trophy to a delighted Borrisokane team in Borrisokane on Saturday.

In an extraordinary finish at Borrisokane on Saturday afternoon the home side battled back from seven points down to beat Moneygall-Clonakenny in the North Tipperary Under-21A Football Championship final.

Borrisokane appeared doomed to defeat in the 50th minute following the concession of a Mathew O’Sullivan goal (0-5 to 3-3), but Borrisokane came thundering back into this contest before an extraordinary goal from Liam Cleary in the 59th minute sealed a famous win. Indeed, Borrisokane fired 2-3 without reply during the frantic closing minutes of this contest.

Diarmuid Ryan was terrific for Moneygall-Clonakenny and must be wondering how he ended up on the losing side following this entertaining contest - the combination side led 2-2 to 0-3 at the break, but will be annoyed to learn that they conceded fourteen frees in the second half alone.

Meanwhile Borrisokane had to be admired for their resilience. Although the home side struggled to contain Moneygall-Clonakenny at times, Borrisokane refused to give in and when man of the match Gary Ryan caught fire at centre-forward they came roaring back into this contest.

Mike Heenan presented Borrisokane with the lead in the fourth minute before Jack O’Brien hit back with two converted frees for Moneygall-Clonakenny who led 0-2 to 0-1 after thirteen minutes of play.

Diarmuid Ryan, who looks a terrific prospect, combined beautifully with Liam Quigley in the 19th minute before the full-forward was fouled for a penalty which Ryan buried in the bottom right hand corner (1-2 to 0-1).

Borrisokane responded with a Gary Ryan free four minutes later before Liam Cleary and Jack Larkin worked hard to create a shooting opportunity for Dylan Power in the 27th minute (0-3 to 1-2).

Moneygall-Clonakenny had failed to score from play thus far, but that prevailing pattern was addressed in emphatic terms in the 29th minute - Diarmuid Ryan fielded a Mathew O’Sullivan delivery and then rifled home a terrific left-footed goal.

Two Gary Ryan efforts (one free) book-ended a Diarmuid Ryan free during the third quarter before Moneygall-Clonakenny ‘keeper Mark Fanning made a point blank save to deny Mike Heenan a goal in the 46th minute.

And, five minutes later it appeared as if Moneygall-Clonakenny had this final all wrapped up when Diarmuid Ryan fisted across the face of goal and there was Mathew O’Sullivan to palm home his side’s third goal in the 50th minute (3-3 to 0-5).

They are born with their sleeves rolled up in Borrisokane, however, and within a minute Gary Ryan blasted his shot into the roof of Mark Fanning’s net to launch the comeback.

In the 53rd minute Ryan intercepted a Moneygall-Clonakenny kick-out and booted over a point before Jack Larkin skinned his man in the 55th and landed a smasher off his right to leave two between them (1-7 to 3-3).

Then, with just a minute to go, Jack Larkin found the off-the-shoulder run of Liam Cleary and the midfielder fired home a sensational goal into the top left hand corner (2-7 to 3-3).