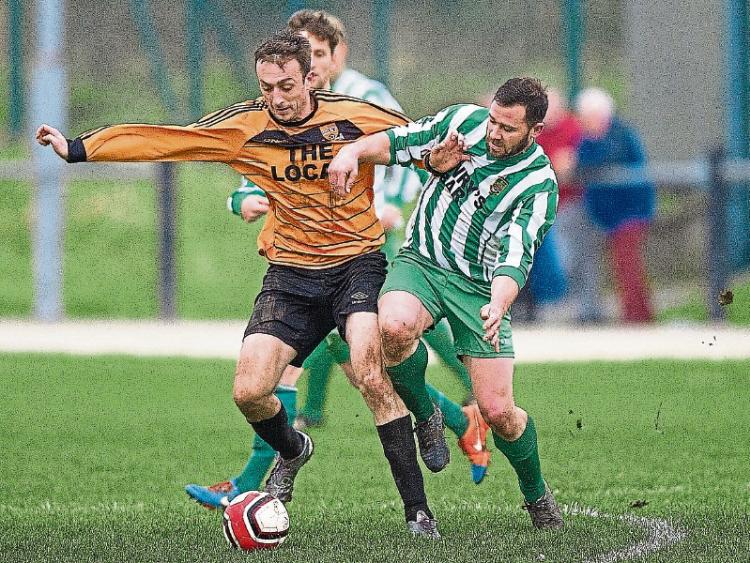 After the bitter disappointment of last weekend’s FAI Cup loss, St Michael’s got their season back on track in the Tipperary Cup on Sunday last.

Saints must have seemed like a wounded animal to a Bansha Celtic team that are flying it in the Premier League this season, but the home side were in no mood to surrender another title at Cooke Park  and re-asserted their domestic dominance with a very assured performance that sent them to the semi-final of this seasons Tipperary Cup.

Despite playing into a strong wind in the first half, the home side looked dangerous from early on and had chances from David Slattery and Colin Bargary within the first ten minutes.

They eventually opened the scoring in the 13th minute when Olly O’Driscoll laid off the ball for Joey Mulcahy who hit an unstoppable shot from the edge of the area to the net.

The visitors took to defending high up and caught O’Driscoll just offside on two occasions, as the Saints pressed for a second, but Bansha Celtic had their own chances in this middle period of the half, notably from a 23rd minute Dennis Peters free that sailed across the Saints area only needing a vital touch, and Tony Egan did well to flick on a header to Darren McGrath minutes later, but his shot didn’t trouble the keeper.

Almost inevitably in a big game, Paul Breen made it two a minute before the break, when he scored from close range after the ball broke in the area following a Shane Ryan corner kick.

The home side had a gilt edged chance to reduce the deficit a minute into the second half but Tony Egan’s shot straight at Adrian Walsh.

Saint’s punished this profligacy ten imutes later when Olly O’Driscoll got a touch on a Slattery shot to guide the ball past Bob Doyle and make it 3-0. Joey Mulcahy in his Clonmel Town days comes up against Clonmel Celtic keeper Ciarán Kenrick in a local derby game.

And Joey Mulcahy made it four from the penalty spot after the hour mark to assure the victory for the home side.

Ten minutes from time Cillian Fitzgerald played a quick ball to Darren McGrath and his deep cross was headed home by Niall Daly to score a consolation goal for the visitors at 4-1.

Pa Quinn did have the ball in the net in the final minute after finishing off a Luke Quinn pass but the flag was raised for offside, and the game finished in a three goal victory for the home side.