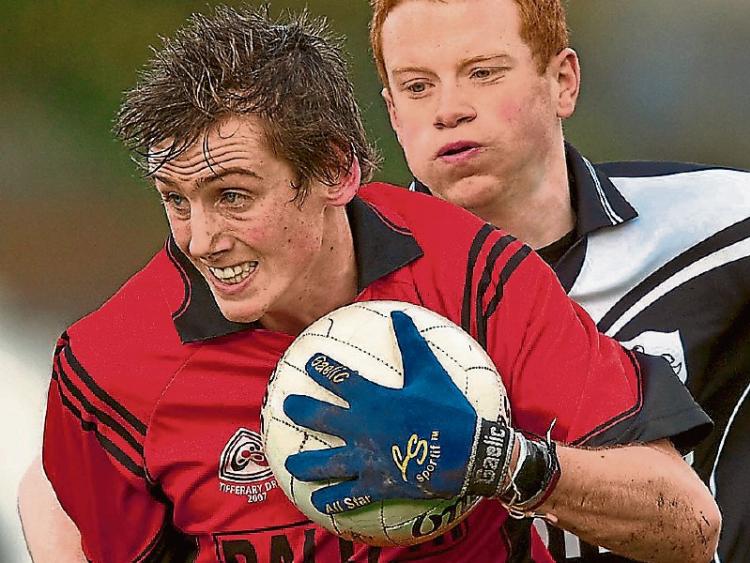 Ballyporeen's Conor Sweeney kicked 11 points for his side in their win over Cahir at Ballyporeen.

A somewhat understrength Ballyporeen side got their 2018 campaign off to the best possible start with a 10 points victory over Cahir in the County Senior Football Championship game at  Ardfinnan on Sunday afternoon.

Meeting for the second consecutive year in the group stages, Ballyporeen repeated their dose of last year at the same venue (1-14 to 0-14) but in a far more decisive manner this time around, particularly in the final quarter when they ran Cahir ragged. Having gone in at the break level, Ballyporeen blitzed the second period, outscoring their rivals by 2-9 to 1-2, and always held the trump cards in terms of passion and pace, and of course the expert free-taking of Conor Sweeney.

The win sets Ballyporeen up nicely in their group which also includes Killenaule and Kildangan, but judging on this performance from Cahir, they will have to improve significantly if they are to avoid the relegation play-off they endured last year.

Cahir though did look the more fired up from the start on Sunday and two points inside the first three minutes from full-forward Dean Lonergan should have settled them better, but Ballyporeen hit back with three points in rapid succession from Darragh Lyons, and a brace from county star Conor Sweeney (one a free) to lead after eight minutes.

Liam Casey kicked an equaliser for Cahir from 45 metres after tenacious tackling forced a turnover, before Conor Sweeney soon edged his side back in front again.

Cahir enjoyed their best spell of the day around midway in first half when three fine points in a three minute spell nudged them 0-6 to 0-4 ahead.

A move involving Dean Lonergan and Stephen Grogan was finished superbly by Liam Casey in the 14th minute and almost from the kick-out Brian McKenna and Liam Casey combined to give Mikey O’Connor a chance which he duly took for a point. And when O’Connor then turned provider for Dean Lonergan to kick his third point of the half, Cahir were motoring well.

The game turned significantly in the 22nd when a passing movement for Bally’ involving John O’Callaghan and Tommy Sweeney ended with Conor Sweeney being fouled close-in. The Tipp senior, instead of tapping over the easy point, saw Davey Hyland free and Hyland finished the chance low to the net to put his side 1-5 to 0-7. Cahir were left to kick themselves for falling asleep at such a crucial moment.

Clonmel Commercials give Ardfinnan a hammering

The Mark Ryan managed Ballyporeen side took inspiration from the goal and Adrian English finished off a move created by Rian O’Callaghan’s overlap to double the advantage. And soon they were three to the good when English – whose pace was a torment for the Cahir inside line – was fouled and Conor Sweeney kicked his third first half free for a 1-7 to 0-7 lead.

As the started the first half, Cahir finished strongly and by half-time had the game back to all square.

A move started by Liam Casey and linking up Conor Casey was pointed by Kieran O’Dwyer in the 28th minute. From the kick-out county midfielder Casey, in a one-two with Dylan Fitzgerald, kicked over a fine point to reduce the leeway to the minimum. And when a late foul by Conor Sweeney was penalised by referee David Grogan from where the ball landed, Liam Casey pointed to send the sides in level at the break, 1-7 to 0-10.

A concession of early second half frees by the Cahir defence, struggling to keep pace with Adrian English and Josh Macken in particular, saw Conor Sweeney rattle off three points inside the opening six minutes, the third a superb effort from over 45 metres, as the expert free-taker found his range superbly.

Cahir having had a goal chance from Mikey O’Connor superbly saved by Jack English in the 34th minute eventually got their goal four minutes later when Stephen Grogan swung a left leg at the ball which somehow ended up in the back of the net. Against the run of play Cahir were back all-square once more. However, it was to be their last score from play for the day, with only a free and a 45, from Dean Lonergan and Liam Casey respectively, their lot over the final 22 minutes of play.

A Conor Sweeney point in the 40th minute nudged Bally’ ahead again before Lonergan’s 44th minute free restored parity. Hard to credit that Cahir, still in the game for all their failings, would fall off the face of the earth over the final quarter.

Four points in-a-row followed for Ballyporeen. Paudie Fitzgerald, just on for Shane Molan’s black card, finished off an excellent fast flowing move in the 47th minute, and this was followed by three white flags from Conor Sweeney (2F), with the effort from open play a gem from 45 metres after John O’Callaghan started the move.

Liam Casey kicked his side’s final score of the game from a '45' in the 51st minute to bring the score back to 1-15 to 1-12, but the last few minutes were mostly played on Ballyporeen’s terms.

The goal to kill the game off came three minutes from time when Eoin Kearney and Davey Hyland combined down the right side of the pitch to release Adrian English, and with a lot still to do, English skinned the Cahir defence before scoring low past Keelan Hickey.

Darragh Lyons tagged on a 62nd minute point, before the same player delivered the coup de grace deep in time added-on when he superbly finished a pass from Tommy Sweeney to wrap up a convincing win for Ballyporeen.

Ballyporeen who were missing John Martin, Willie English and Anthony Crotty, will be delighted with this victory and a 10 points winning margin for good measure. They showed that extra determination and teamwork throughout and made full use of space and pacey forwards to best advantage. Conor Sweeney contributed generously with 0-11 points with Hyland, English and Lyons taking their goal chances well.

In defence John O’Callaghan put in a mighty hour with Shane Molan trojan also. Rian O’Callaghan looked composed at all times around the square.

Tommy Sweeney, Noel Vaughan and Eddie Kearney worked hard and got on a lot of ball in the middle while the forwards as a unit did very well. Conor Cashman  kicked a first half point for Cahir in their County Senior Football Championship game against Ballyporeen at Ardfinnan on Sunday.

This was a bad loss for a young Cahir in the process of rebuilding and who had 11 of the team under 23 years of age. They are now under pressure for results if they are to have a more fruitful campaign than last year’s. It won’t be a performance they will want to dwell on too much. Liam Casey, Dean Lonergan, Conor Cashman, Mikey O’Connor and in patches Niall McKenna were their best performers, while Kieran O’Dwyer’s forced withdrawal from the backline due to injury early in the second half was a huge blow. A big improvement is needed short term, while patience is required long-term as they go about rebuilding a side that only a few short years ago were desperately unlucky to be beaten in a county final replay by Loughmore/Castleiney.