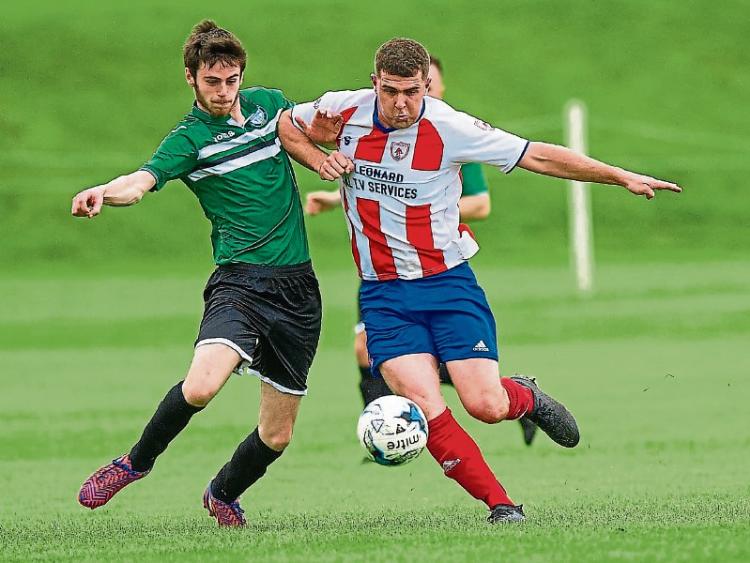 Niall Daly (Bansha Celtic, right) seen here in action against John O'Connor (Clonmel Celtic). Daly scored a hat-trick for his side in their 11-2 win over Tipperary Town at the weekend.

This was as one-sided a result as you could get, but from how the game started you could never have seen it coming.

The game began  with Tipperary Town scoring first through Vinnie Godfrey after only six minutes. And although the visitors took just two minutes to equalise through Shane Egan, the hosts then pounced on a poor pass and made it 2-1 only four minutes later, when Godfrey hit his second. However, from then on it was all Bansha Celtic.

They equalised for the second time in the 15th minute and took the lead five minutes later, thanks to a brace from Bernard Fitzgerald.

The goals kept coming in the first half from Niall Daly, Shane Egan, Fitzgerald’s hat trick, and a second by Daly a minute from the whistle to leave the scoreboard reading 7-2 at half time for the visitors.

The second period was just as one sided, and the goals continued with Bernard Fitzgerald getting number eight three minutes into the half. Darren McGrath was next to score ten minutes in, and Sean Daly got up from defence to score on the hour mark.

Niall Daly joined Bernard Fitzgerald in scoring a hat trick in the 68th minute to wrap up  the scoring. Bernard Fitzgerald (Bansha Celtic, left) seen here in action against Thomas Donovan (Glengoole United). Fitzgerald netted a hat-trick for Bansha in their 11-2 demolition of Tipperary Town in Tipperary at the weekend.

Peake Villa went into this game at the top of the league but by the time the game was over their supporters felt  that really are only keeping the summit warm while the St. Michael’s their outstanding games in hand.

What was supposed to have been a contest between two of the top teams in the league turned out to be a measured performance from the reigning champions as they look to win their third title in a row.

Within the first ten minutes of the game the visitors had fashioned chances through Jonathan Kennedy and Joey Mulcahy before Villa had their first shot in anger on the quarter hour when Pippy Carroll fired wide after a Mikey Wade cross.

The teams them traded blows over the next twenty minutes or so without overly troubling the keepers until ten minutes before the break when Colin Bargary hit a stunning shot from all of 30 yards to the net to give the visitors the lead.

They almost doubled that advantage shortly after when Shane Ryan’s free kick brought a smart save from Stephen Ryan but by the end of the half there were no more goals.

The second half started at a quick pace also with St. Michael’s again having the bulk of the chances without scoring, a common issue they have had during the latter half of the season.

They were comfortable enough until Peake Villa  had a series of chances midway through the half with Walsh saving superbly from Hennessey and Wade in quick succession.

Hennessey then doubled on a corner which saw Walsh tip over the bar, as it looked like the home side were going to get the goal that their good work deserved.

Saints rode this storm however and made sure of the victory on 83 minutes when Rodrigo Goncalves made it two from close range after the Villa keeper spilled a Shane Ryan corner kick.

This assured the points for the Tipperary town side, and closed out what has been a relatively good season, albeit another without silverware for a young but improving Thurles side.

Veteran striker Barry Ryan returned to Clonmel Town mid-season and scored his second hat-trick since that return, to set up a win that still leaves the visitors scrambling for points as they attempt to stay in the Premier League.

Ryan was a constant threat for the home side and scored the first early one when he slipped past the visitors’ offside line.

Town were in control after that and went two up courtesy of a Keith Browne screamer midway through the half, before Shane O’Meara found Ryan minutes before the break to slide home his second and give his side a 3-0 lead at the break.

Tony Scully set Barry Ryan up for a third midway through the second period while the home side got a fifth late on through Conor O’Sullivan.

The game's only goal came in the first half when a good one-two movement between Jimmy Carr and Rodrigo Goncalves saw Carr cross eventually for Colin Bargary to score with a far post header.

The second half was for the most past a case of Celtic sitting deep and defending in numbers as Saints came forward time and again but there were no further goals.